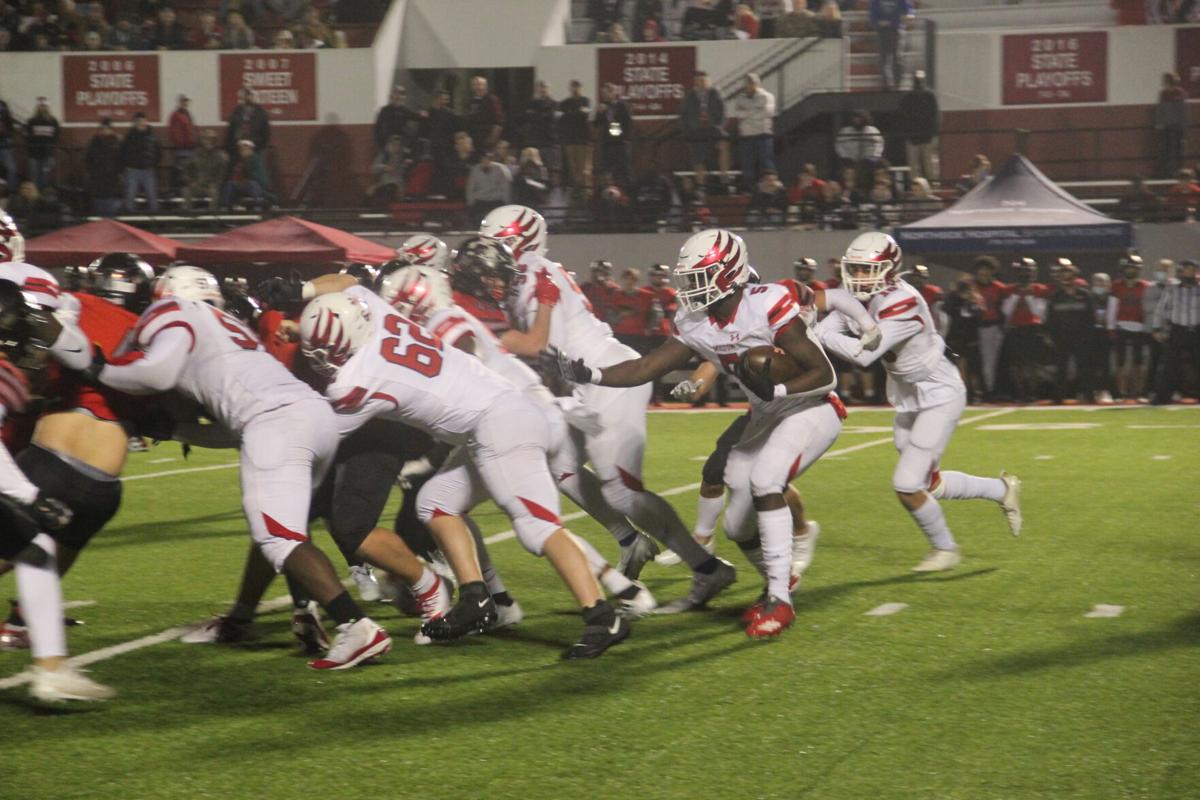 Milton junior Jordan McDonald (5) rushed the ball 22 times for 259 yards and 4 touchdowns in the Eagles' win over Cherokee Nov. 20 in the de-facto Region 5-7A championship game. 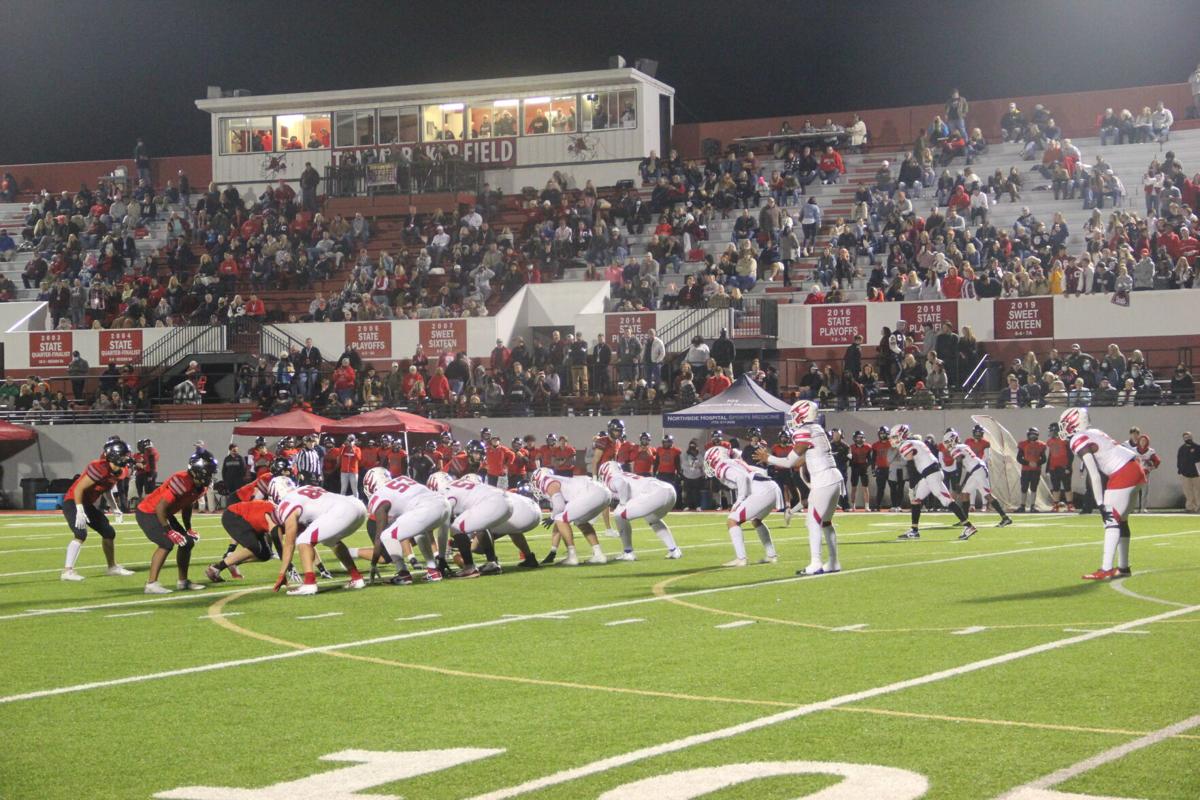 CANTON, Ga. — For the third straight year and fifth time in program history, the Milton football program staked its claim as region champions.

The Eagles traveled to Canton Friday night for the final week of the regular season and the de-facto Reg. 5-7A title game and left Tommy Baker Field with a 41-29 victory over the Cherokee Warriors.

“These seniors are 15-0 in region play,” said Milton head coach Adam Clack. “That’s a testament to following the plan and following the process and going through the phases that we go through … I love this football team. There’s so much there if they can just capture it and hold on to it for 48 minutes.”

Milton scored first in the contest, as junior running back Jordan McDonald took a handoff eight yards for a touchdown late in the first quarter.

Cherokee responded with a touchdown of its own, but a bad snap on the extra-point attempt allowed Milton to keep a 1-point lead.

Following another bad snap on a Cherokee punt attempt, Milton’s special teams came up with a scoring play to extend the Eagles’ lead. Dayne Edwards fell on the ball in the end zone for a touchdown, and Milton took a 14-6 lead.

Cherokee’s offense, which usually moves methodically down the field, came up with a big gain for a touchdown on the next drive. Three-star quarterback A.J. Swann connected with Adarius Harshaw on a deep ball for a 68-yard touchdown. The Warriors went for two points but were unsuccessful, keeping Milton’s lead at 14-12.

Cherokee took the lead, 15-14, shortly before halftime with a 34-yard field goal.

Following punts from both teams to start the second half, the Eagles re-gained the lead on a 1-play, 72-yard drive. McDonald took a handoff from Farrell and scored for his first of three touchdowns in the half to put Milton up 20-15.

Milton’s defense came up with another stop the next drive, and Milton’s offense took over with a chance to build on its new lead.

Though they failed at first and were forced to punt, but Cherokee’s return man muffed the punt. The Eagles recovered and then capitalized.

Bryce Thornton took a handoff five yards for a touchdown, and Milton’s lead grew to 27-15.

The Eagles lead remained 12 points entering the fourth quarter, but Cherokee responded early in the period with a 24-yard touchdown pass from Swann to cut the lead to 27-22.

The momentum shifted towards Cherokee momentarily with the touchdown, but Milton didn’t flinch.

The Eagles countered with a seven-minute scoring drive capped off by McDonald’s third touchdown of the night to take a two-score lead with just over two minutes left in the game.

Cherokee, which was playing for its first region title since 2002, was not done fighting. The Warriors marched down the field in four plays and scored a touchdown to make it a five-point game.

The Warriors needed an onside kick recovery and another quick score, and a comeback win was not out of the question.

Milton then squashed those hopes. Thornton recovered the onside kick attempt and McDonald broke multiple tackle attempts and ran loose for a 44-yard touchdown on the next play to put the icing on the cake for the Eagles.

“[Cherokee’s] a hell of a football team right there, and they’ll expose you every time you give them an opportunity,” Clack said. “I was so proud of our guys for being able to take one heck of a punch. It was like a heavyweight boxing match tonight just back and forth and back and forth. I’m proud of my guys for not panicking and overcoming some adversity.”

McDonald put on a show against the Warriors, carrying the ball 22 times for 259 yards with four touchdowns. The Eagles rushed for 348 yards in the win. Meanwhile, Milton’s defense held Cherokee junior running back Keith Adams Jr., who recently added an offer from Clemson, to 68 yards and on 16 carries.

As the No. 1 seed out of Region 5, Milton plays the No. 4 seed from Region 8, Peachtree Ridge. Peachtree Ridge finished 4-4 during the regular season in a region including Collins Hill, North Gwinnett and Mill Creek.

Looking ahead should the Eagles defeat the Lions, they would face the winner of Archer versus Gainesville. That game would be at home for Milton, as the No. 1 seeds are guaranteed a home-field advantage for the first two rounds of the state playoffs.

No Milton team has finished the season as undefeated state champions. The 1952 team lost in the first round of the playoffs. The 2018 7A state champions lost back-to-back games during the regular season to Roswell and Parkview.

“I believe it in my heart that we have enough talent and enough ability on this team to have a shot to have a shot,” Clack said. “We may not be the best team in the state and may not be the most talented team in the state, but if you can get there, anybody can win on any given night. We’ve been there and we’ve done that before. There’s a lot of belief there. We just got to keep staying in the moment and fixing the little things to put it all together.”