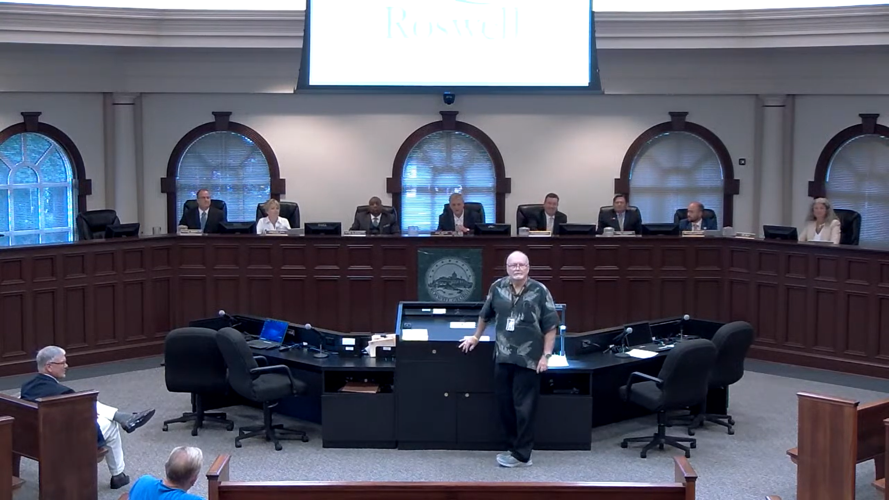 Roswell resident Michael Dowda addresses Mayor Kurt Wilson and the City Council July 11 about the challenges he’s faced trying to find an apartment to relocate to after 199 Grove Way was deemed structurally unsound. 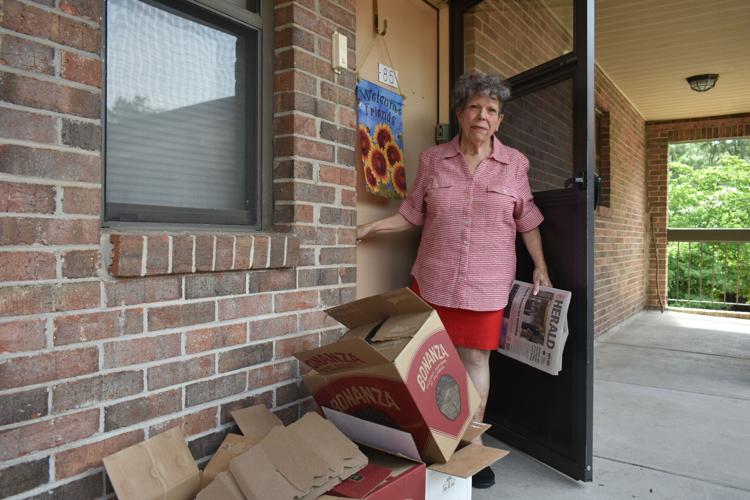 Sheila Richards is one of 33 residents at the Grove Way apartments who has until Sept. 1 to relocate after the City of Roswell deemed their building structurally unsound.

Last week, a resident called our managing editor and said he was worried about his future. He lives in an affordable housing complex that was shut down, and now he and his neighbors weren’t sure where to go.

Pat Fox took that call from Michael Dowda, typed out the information and sent it to Chamian Cruz, our Roswell reporter.

A few days later, we published a story about Dowda and the 32 other residents of 199 Grove Way, an apartment complex owned by the Roswell Housing Authority. The building is 40 years old, sits within a half-mile of City Hall and is in such disrepair that the city has ordered it unsafe for occupancy.

The apartments are reserved for lower-income residents. Many of the tenants have lived there for 20 years and are elderly or disabled.

Now, they must all find a new place to live. They aren’t having much luck. Georgia does not require landlords to accept vouchers, and not many are willing to do it. As a result, 15 of the 33 Grove Way residents still have no place to go.

Chamian attended a community meeting, interviewed tenants and spoke with housing administrators. She walked through the complex with Dowda, experiencing firsthand the condition of the building and its units. Then, she wrote about it.

Roswell Mayor Kurt Wilson took a few minutes out of last Monday’s City Council meeting to address Chamian and the Alpharetta-Roswell Herald. He said there was a story that should be told, “a fantastic expose to be written,” about the Roswell Housing Authority. But it wasn’t written, he said. Instead, we focused on the current situation — where we are, not how we got here.

Part of Mayor Wilson’s goal, I think, was to point out that his administration inherited the problem. He walked into a situation that instilled genuine, dire concern for the safety of his residents, and he acted on it. I commend him for it.

But I push back on his other point. Michael Dowda’s story did need to be told. In fact, I think it’s the only one that really matters.

A small part of what we do in local news is investigative journalism. We spend money on FOIA requests and PACER access. Reporters comb through budgets, monitor indictments and read countless police reports. We compile hundreds of excel documents to find patterns in municipal data. We’ll even take a city to court if we think they’re breaking the law.

“Watchdog journalism” is important. Some newspapers even use it to drive subscription campaigns. But it’s not all there is.

The reality is that most of our stories are from, and about, the community. Your valedictorians, Rotary Club meetings and back-to-school drives. Within our pages, you’ll find columns about the area’s history, photos from Fourth of July events and reports of teacher burnout. We try and profile a local business every week – picked by the newsroom, away from the sales department, I might add. Those are the stories that relay the face of a community and what it’s like to live there.

As Michael Dowda stood at the podium in Roswell City Hall, his face conveyed much to me. He looked right at the City Council and Mayor Wilson, as they insisted they inherited the problem. Investigate the Roswell Housing Authority, they said. That’s the real story.

“I was homeless for almost four years,” Dowda said. The Vietnam War veteran had slept in cars, warehouses and hotels until a spot opened at Grove Way. “I will not be homeless again. I’ll soon get my home in heaven. But we’ve got to solve this problem.”

“We’re going to get this resolved. I was homeless for almost 4 years. … I’m not going to be homeless again. I’ll soon get my home in heaven. But we’ve got to solve this problem.” – Michael Dowda, Roswell resident pic.twitter.com/pZW2WUVwa4

I truly share Michael Dowda’s optimism that this mayor and council, city staff and “especially the residents, other citizens of Roswell,” will find a solution.

Optimistic, yes, but it will take work.

Since the story has come out, we have heard a lot of folks calling for a fix. Senators, representatives and other elected officials have expressed concern. Community and nonprofit leaders say they are willing to lend a hand. But there is still no clear resolution.

Part of local news is calling out wrongdoing. It’s an important part of this story, and as Mayor Wilson said, there is no shortage of it. How did we get here? How did this property get to be in such bad shape? Why is the move being handled this way? To say nothing of the larger questions of this issue. What’s going on with housing in Metro Atlanta, or around the country? Why are we treating our elderly, our veterans, our vulnerable populations so poorly?

Those are all questions we need to ask. But we can’t lose sight of the real story.

On Sept. 1, Michael Dowda and his neighbors must leave their homes and they don’t have anywhere to go.

That’s the story we must tell. We must also work together, as a community, to find a solution. Chamian, Pat and I want to hear from anyone who wants to help. Developers, Rabbis, officials, therapists, soccer coaches. If you have an idea, let us know. If you don’t have one, but you still want to help, let us know that too.

Two things make me optimistic; I know people in this community will want to help, and there absolutely must be a solution. I refuse to concede these residents are destined to be without a place to sleep.

In talking with folks over the past week, I have remarked that this is the most important work we’ve done in local news. I’m beginning to think it’s the only story that matters at all.

Carl is the Director of Content & Development for Appen Media. He is a graduate of Alpharetta Elementary, Fulton Science Academy, Milton High School and the University of Oklahoma.