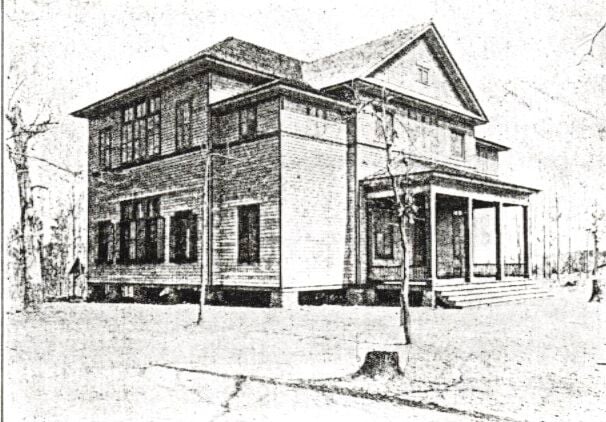 Hammond School as it appeared in 1933.

Award-winning author Valerie Biggerstaff is a longtime columnist for Appen Media and the Dunwoody Crier. She lives in Sandy Springs.

Before I begin this week’s Past Tense, I would like to thank J. D. Boozer for sharing his memories and knowledge of the Doraville fire of 1972. Boozer advanced from entrance firefighter to Department Chief before retiring with the DeKalb County Fire Department. Thank you Chief Boozer.

The earliest school on record in the community was established in 1851 on Sandy Springs Methodist Church property. Records show that a one-room school across the road from the church burned in 1897. (“Sandy Springs Past Tense,” Lois Coogle)

Following the fire, the community worked together to build a school that looked like a two-story house at 300 Johnson Ferry Road. It may have been known locally as Hammond School but is first referenced by that name in the Fulton County Schools records in 1904. (Fulton County Schools Archives, Hapeville, GA)

Fulton County Board of Education records list the 1904 teachers of Hammond as Susan Hines, W.M. Suttles and Hattie March.

Members of the local Odd Fellows, a fraternal organization, helped add a room to the school in 1920. They provided framing and labor in exchange for the use of an upstairs room for their meetings.

Four women represented Sandy Springs at the 1930 Fulton County school board meeting to request a new school building. The new school was built in 1932. It was designed by Robert and Company architects and cost around $20,000.

Some of the teachers who worked multiple years at Hammond School include Mae Burgess, Katherine Patterson, and Principal J.P. McCleskey. Edith Roberts, daughter of Roswell Railroad engineer Isaac Roberts, taught at Hammond from 1928 to 1932. Teacher Betty Tiller was part of an early Sandy Springs family.

Annie Houze Cook worked at Cross Roads School and Hammond School before being asked to retire. She then founded the Annie Houze Cook Kindergarten at Providence Baptist Church.

The number of teachers at Hammond increased significantly through the years. In 1941, there were five teachers, a principal and assistant principal. In 1957, 25 people, including teachers and administrative staff, worked at Hammond.

On January 22, 1959, a devastating fire destroyed much of the school. The Atlanta Constitution reported on the fire the following day with the headline, “$275,000 blaze wrecks school in Sandy Springs.” The older classrooms and auditorium were destroyed, but a 1954 addition to the school survived the fire.

Chris Curth lived with his parents and sisters two doors away from Hammond Elementary on Hunting Creek Drive. The children were students of Hammond in 1959 and watched much of their school burn.

A new building was completed in 1960, but in 1975 when a middle school program began, Hammond closed. In February of 1979, bids were received for “sale of surplus school property,” and the school and property were sold.

Most of the history in this article was found in the Fulton County Schools Archives, located in Hapeville, Georgia.

Opinion: I used MARTA Reach in Alpharetta. It's like Uber, but 1/5 the price.

Vote now for the Best of North Atlanta

The best is back, and you're still the judge. Pick your favorite local businesses now through August 15.

Podcast: Who is Joni Mitchell?