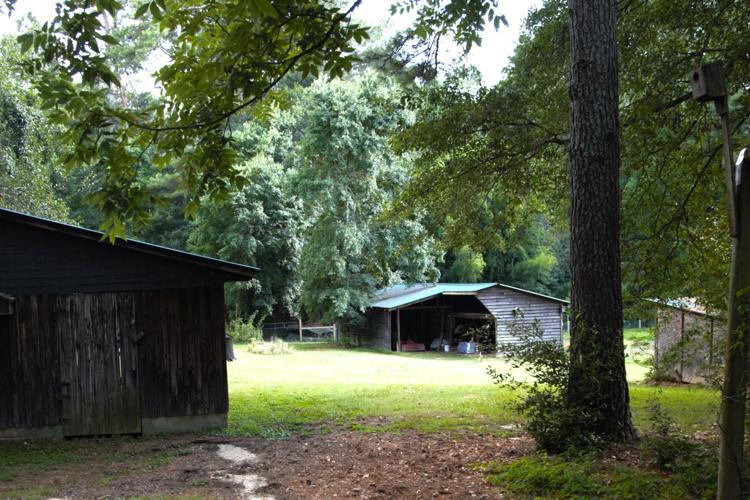 Billy built several barns and sheds on his property, doing much of the construction himself. The middle barn was built to house his horses. Billy rode in Old Soldiers Day Parades in Alpharetta. 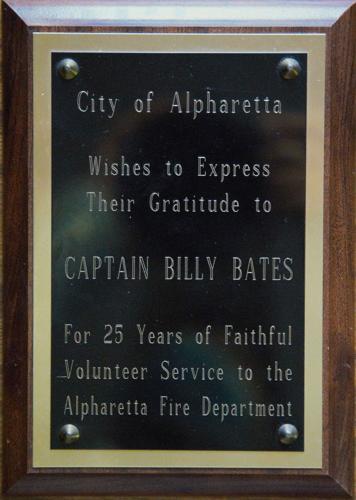 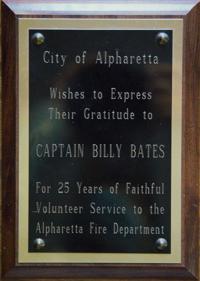 Following his 25 years as a volunteer fire fighter, the City of Alpharetta recognized Billy for his service. Billy played an important role as a volunteer. His son Bill served as Chief of the Alpharetta Fire Department for many years. 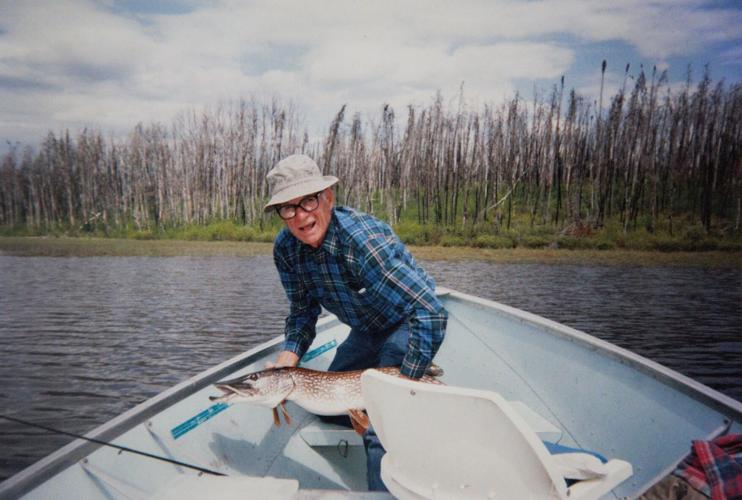 Billy Bates had wide-ranging interests, but above all he loved to fish.

In a previous column, I described Billy Bates’ experiences as a sailor during World War II. The story continues today about his passion for life as expressed through his wide-ranging interests and through some of the people who played important roles in his life.

Billy had many hobbies. He traveled all over the Southeast searching for geodes and other rocks and minerals. Following his death, his large collection was donated to the Cobb County Geological Society.

He made beautiful furniture from trees cut down on his large property on Mayfield Road and from rare wood he collected and stored in his well-appointed workshop.

He collected many varieties and colors of bamboo from around the world and had a neat circular garden devoted to them. He had to plow the garden every year to keep the bamboo under control.

He helped catalog all the cemeteries in the area, often trapsing through thick underbrush to locate long forgotten graves. His research and exploration helped locate the first settlement of Alpharetta, known today as Farmhouse.

Phil Benton, husband of Billy’s daughter Shirley, first met Billy in 1968 when he and Shirley were students at North Georgia College. After their marriage in 1972 they moved into a house next door to Billy and his first wife Dorothy Mae Sims (1926-1989). Phil enjoyed visiting Billy’s workshop which contained lots of tools.

“I would hold boards while he sawed, helped in the garden and helped him crank small engines such as wood splitters, tractors and chain saws. He was always in motion which was one reason he stayed in great shape for most of his life,” Phil said.

Shirley says that her father wanted “three educated, productive children. As a child I loved the road trips we so often took to historical sites, Civil War battlefields, Indian burial grounds, family cemeteries, gold mines, caves, rock quarries, old-growth forests and family home places. Every place we went seemed to be ‘just a little bit farther’ down some unused, well-rutted, red dirt road. I suspect in his own way he was teaching us to be good stewards, to respect and honor our history. He took us to ‘natural history museums,’ not in structured buildings but out in natural settings.”

Billy’s youngest child, Lynn Bates, recalls attending the Birmingham Baptist Church growing up, noting that Billy was a religious man. Lynn left home to become a teacher in Fulton County and moved back to live in a house adjacent to Billy’s property when she retired. She often helped Billy clear woods and worked in Billy’s large garden. He even bought her a Kuboda tractor with scoop and taught her to drive it.

“Those were very special years for me,” Lynn said.

Norm Broadwell, who taught two of Billy’s three children as a history teacher at Milton High School for 40 years, became close friends with Billy through their mutual love of history. They were among the co-founders of the Alpharetta and Old Milton County Historical Society in 1979.

In 1991 Billy married Marjorie Moore who in the 1970s worked for five years in the Bates and Wood Super Market with her brother Bobby, both as butchers. She later worked for the Post Office for 11 years and then for a private company doing computer data entry.

She recalls that Billy loved to take long drives, and that twice a week they would spend the day in the car.

“Billy could navigate by rivers and streams that he knew by heart,” she said. “He never needed a map. We always went to someplace new.”

He made hunting knives out of the used saw blades. Marjorie sewed leather sheaths for the knives.

Connie Mashburn, another close friend and local historian, thought of Billy as a teacher.

“He brought more people into genealogy and history than anyone I have ever known,” said Connie, who treasures a chair Billy made for Connie’s grandson.

Barry Mansell, Billy’s first cousin, has fond memories accompanying Billy on trips with his brother Marcus, and his father William, son Bill and several others in the 1970s to Horseshoe Beach and Steinhatchee, Florida, for sea bass and the inevitable fish fry. Billy was the chef.

Billy will be long remembered for two unique contributions to the community: his research and depth of knowledge of local genealogy and his key role in the development of the Alpharetta Fire Department.

Billy suffered a heart attack in the early 1980s. While recovering, son-in-law Phil, who worked for Honey Baked Hams for 16 years in their computer department, set up a Compaq computer in Billy’s office. Phil bought a $3.50 genealogy program for Billy. In the early 1990s Phil built custom computers for Billy who had two computers going at a time using specialized software packages. He followed the genealogy of many local families and had copious notes about people, eventually accumulating 50,000 entries.

Billy became the acknowledged expert in local genealogy and frequently gave public presentations on the subject.

In 1944 a handful of local business leaders obtained sufficient surplus war material from the U.S. government to start an Alpharetta Volunteer Fire Department. It gradually grew in size and capability, and in 1957 Billy was one of several local men to volunteer as part of a reorganized department.

The details of this time are contained in the book “Alpharetta, Milton County – The Early Years,” by Connie Mashburn, © 2008 by City of Alpharetta. Billy devoted more than 25 years to the fire department.

Bill Bates followed his dad into the department. At the age of 10 he would accompany his father to fires several times a week but had to stay in the car and watch from a distance. As he got older, he was allowed to get out of the car and eventually joined the department and worked his way up the ladder. He became a battalion chief, then fire marshall and was responsible for building six fire stations. He became the first salaried chief of the department in 1989, a position he ably held until his retirement in 2006 ending a career of 43 years in the fire service.

Billy’s final years were marked by health setbacks. Marjorie was his devoted caregiver, always available to make him comfortable and as productive as possible. Friends often came to pay their respects to Billy Shirley Bates, truly one of a kind.