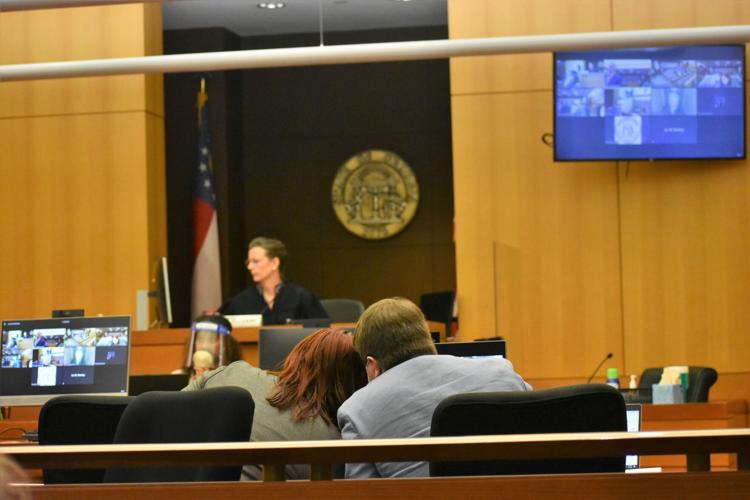 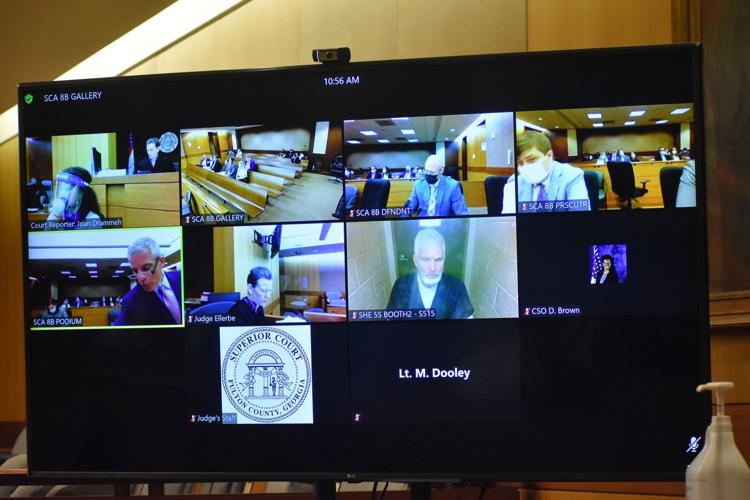 Robert Allen Vandel, 64, of Canton, appears via Zoom for a case management hearing in Fulton County Superior Court on May 5.

This story was written May 5, one day before Robert Vandel pleaded guilty to charges of rape, aggravated child molestation, false imprisonment and child molestation. The former teacher was sentenced to 10 years in prison. (You can read that coverage here.)

We are publishing it here because it informs a more comprehensive view of Vandel, his case and the judicial process itself.

ATLANTA — As Robert Allen Vandel waited on his case management hearing to begin May 5, he sat in a small room inside the Fulton County Jail, put on a pair of reading glasses and made the sign of the cross.

The 64-year-old former teacher at Fulton Academy of Science and Technology in Roswell was arrested in September on charges of rape, aggravated assault with intent to rape a child under 14, aggravated child molestation, sexual assault by persons in supervisory authority, enticing a child for indecent purposes and false imprisonment of a child less than 14. In February, he pleaded not guilty.

His trial was set to start on May 6.

Shortly after his arrest, the Georgia Bureau of Investigation announced it was helping Roswell police to potentially identify additional sexual assault victims across the state and in Alabama. Roswell detectives, with help from the Holly Springs Police Department and Cherokee County Sheriff’s Office, arrested Vandel at Lyndon Academy in Holly Springs, where he worked after resigning or being fired from FAST.

According to arrest warrants obtained by Appen Media, Vandel is accused of raping a seventh-grade student in his science and math class at FAST between February and March 2020. The warrants state Vandel would keep roaches, lizards and a hedgehog in his classroom to encourage students to spend time with him and would consistently give them candy and ice cream when they visited his classroom.

The student allegedly reported the rape to school administrators, stating that Vandel had previously been rubbing her shoulders and touching her breasts throughout the school year. But when the school reached out to the Division of Family and Children Services, the warrants state, the student’s mother never heard back.

Vandel later left the school after an employee found chat sessions on his computer where he was “targeting a few specific girls and initiating conversations,” the warrants state.

Records show that by the time Vandal was hired at FAST in 2017, he had already been reprimanded by the Georgia Professional Standards Commission and his teaching license had been suspended twice.

According to the commission, Vandel’s teaching certificate was suspended for two years from 2006-08 for violations, including criminal acts, abuse of students and professional conduct, while he was a teacher at Midland Middle School in Columbus. After those two years, he returned to teaching.

At the case management hearing on May 5, Vandel’s defense attorney, Brian Steel, tried to poke holes in one of the main victim’s allegations, saying that the student had a history of harming herself and “manipulating” adults as well as a history of mental health issues because she had been in therapy since she was 11 years old.

Steel also took issue with the fact that the victim did not report the alleged rape when she initially came forward about Vandel rubbing her shoulders and touching her buttocks in the spring of 2021 until several months later.

“That all goes into whether a child’s outcries are consistent with a child who has been sexually abused or are they consistent with a child who manipulates and does not tell the truth,” Steel said. “… All of this would be important for us to bring out in front of the jury so they can decide whether, on the word of [the victim] alone, Mr. Vandel will be suffering conviction for counts one through four.”

But, Fulton County prosecutor Lauren McAuley said the state did not need to hand over the victim’s therapy records to demonstrate that Vandel had a long history of grooming and inappropriately touching students going back more than 20 years.

McAuley, detailing the experiences of approximately nine different students who had come forward with sexual assault allegations, said that Vandel would often give them answers to pop quizzes, extra treats like Klondike bars and would single them out to make them “feel special.”

She said several of them also reported that Vandel would rub their shoulders, touch their breasts, hit them on the buttocks with a ruler or yard stick and press his groin against their backside. Others, McAuley said, reported that Vandel would either request their emails, ask their parents to tutor them or invite them to watch his kids so they could have contact outside of school.

McAuley said that one student even reported having a one-on-one call with Vandel during the pandemic in which he insisted that she be alone in her room with the door closed and alluded to giving her a hickey if he was in the room with her.

In the end, Fulton County Superior Court Judge Kelly Ellerbe deemed two of the victim’s testimonies from more than 20 years ago inadmissible, saying she wanted to keep the trial’s focus on the most recent victims.

“I don’t want the prior acts to become the trial versus those which the defendant is charged,” Ellerbe said.