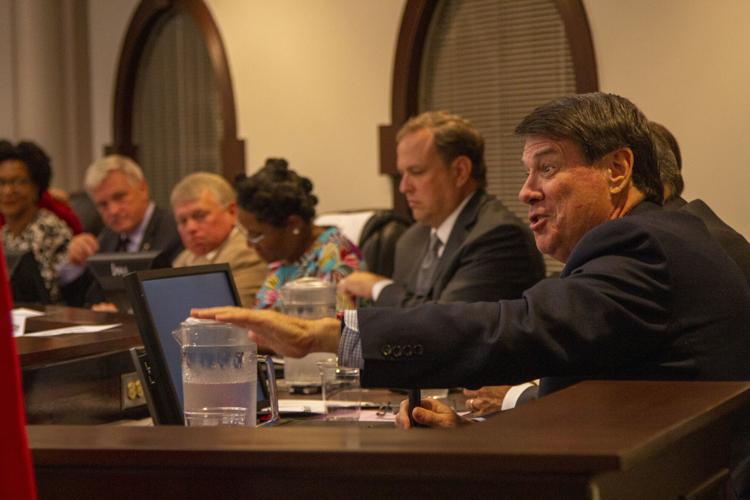 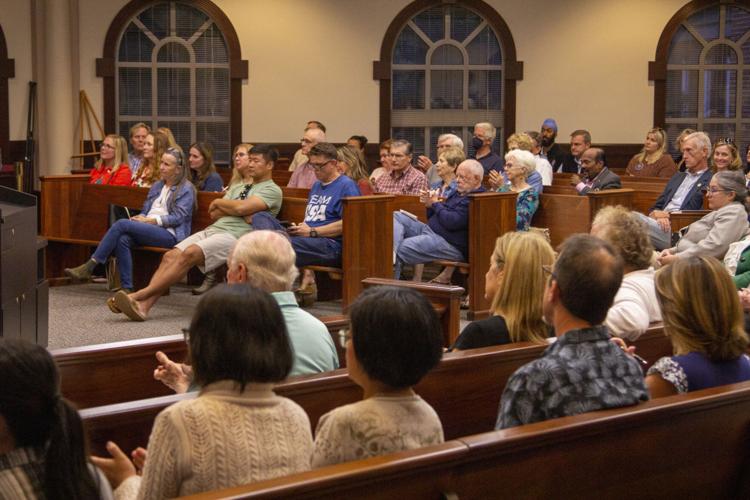 Every 10 years, the county and its cities – now 15 in number – renegotiate how money collected from the 1 percent local option sales tax, or LOST, is distributed. Most often, the pot is generally apportioned based on each city’s population, while the county keeps a small portion for administrative fees.

At stake is more than $3 billion collected over the 10-year period, money cities rely on to help fund hundreds of expenses, from park maintenance to light bills and almost everything in between.

Wednesday night’s meeting included mayors from Roswell, Alpharetta, Johns Creek, Milton, Sandy Springs, East Point, College Park and Mountain Park. It was the first time the cities have coordinated to speak with the public and answer questions about LOST since Fulton County announced it wants to increase its share of LOST proceeds from 4.9 percent to 35 percent.

That initial offer, a 600 percent increase from the prior agreement, drew outrage from city officials, who said the proposal would have a profound and wide-reaching impact on Fulton County’s communities.

County and city negotiators have returned to the table several times since that initial offer, and according to Sandy Springs Mayor Rusty Paul there are now three proposals on the table, all representing a greater share of the LOST pie.

“We've got a lot to lose,” Paul said. “Even if there's a significant change in the current distribution, that will come out of the city's pockets, out of your pockets, and it will affect fire, police, ambulance, parks, all the other things that you enjoy in that process.”

About 100 people attended the meeting as city officials shared their disappointment with how Fulton County has handled LOST negotiations thus far.

“This is an unprecedented challenge that we're facing,” Alpharetta Mayor Jim Gilvin said. “I've never seen anything like this in my life. And so, it's really great to see so many people here.”

Each of Fulton County’s seven commissioners had been invited to participate in the meeting, but only outgoing District 1 Commissioner Liz Hausmann attended.

After introductions were made, the meeting quickly jumped into questions from the audience.

One Johns Creek resident asked why there wasn’t an option for no increase in either the county or city’s sides. He was told that the county’s original position made that option impossible.

“You’re right. That's not an option,” said East Point Mayor Deana Holiday Ingraham. “When you have a party on the other side that starts at a 600 percent increase, you realize that the agreement, if there's going to be one, has to be somewhere in between.”

Holiday Ingraham, who serves on the negotiating team representing the 15 cities, said that Fulton County Commission Chairman Robb Pitts and commissioners Bob Ellis and Marvin Arrington have made it clear they will not approve a split that does not improve the county’s portion.

“Chairman Pitts told us in our negotiating session, that Fulton County gets so little money out of it, they might as well just let it go away,” Paul added. “So, we know we're gonna have to give something. But what we're trying to do is make sure in the process of giving something, we don't damage our ability to deliver the basic services that you require.”

Alpharetta Mayor Jim Gilvin says talks with Fulton County over sales tax distributions are not going well, and that cities like Johns Creek, Sandy Springs and Milton could need to make charter changes to recover losses.

Another Johns Creek resident asked Hausmann directly, “whether the county has suffered” under the 5 percent share it currently receives.

Hausmann said that no, the county hasn’t suffered, but that currently the county is faced with several large projects, at the Fulton County Jail and to make up for the Atlanta area hospitals that have closed in 2022, that will require more funding.

“I don't know if any of y'all have seen the conditions in the Fulton County Jail, its horrendous,” Hausmann said. “So that is going to be very expensive, about $500 million.”

But the panel of mayors shot down Hausmann’s points.

“The jails and prisoners are not an allowable expenditure for the LOST proceeds.” Johns Creek Mayor John Bradberry said. “The population that they serve for the public safety as far as police and fire … it has been reduced. But somehow, in just a few years, the administration costs went from $2 million to $32 million.”

Hausman’s comments on the hospital closings were also countered by Holiday Ingraham, who said that county commissioners had a chance to help support one of the closing hospitals, WellStar Atlanta Medical Center in East Point, before the pandemic.

“I think that is an absolutely disingenuous argument to be made by the county at this point,” she said. “This newfound election year desire to stroke checks for healthcare is an absolute insult.”

Another resident asked Hausmann what expenses, beyond the jail and hospital, the county needed to account for their request.

“I mean, the reality is it's such a small amount of money, that I can't even answer that question, because it's only about 2 percent of our budget,” she said. “So, it's almost miniscule.”

Others from the audience pressed Hausmann to answer in more detail, but she deflected the question saying that the proposed 35 percent increase isn’t on the table anymore, pointing at the jail and hospital as the main expenses Fulton County is expecting for the increase in their share.

“Really the two major expenses are the jail,” she said. “That is a public safety item, so that is not considered illegal, and then the medical health needs that we have are the two main things.”

At the conclusion of the meeting, a Roswell resident asked the panel, “What can we do that will actually make a difference?”

Paul answered that by consistently reaching out to the Fulton County Commissioners by phone and email, residents could ensure that their voices are heard.

“If they're not calling you back, send them emails,” he said. “I guarantee you they're reading their emails. So, get their email address and let them hear from you. We're gonna be up here working on your behalf, but you're gonna have to weigh in on this debate.”

The county and city negotiation teams are set to meet for their first mediation session on Friday at 10 a.m. at the Georgia Municipal Association in Atlanta.

The mayors and county representatives will meet for another Town Hall on Wednesday, Sept. 28 at 7 p.m. The town hall will be held at the Georgia International Convention Center in College Park.