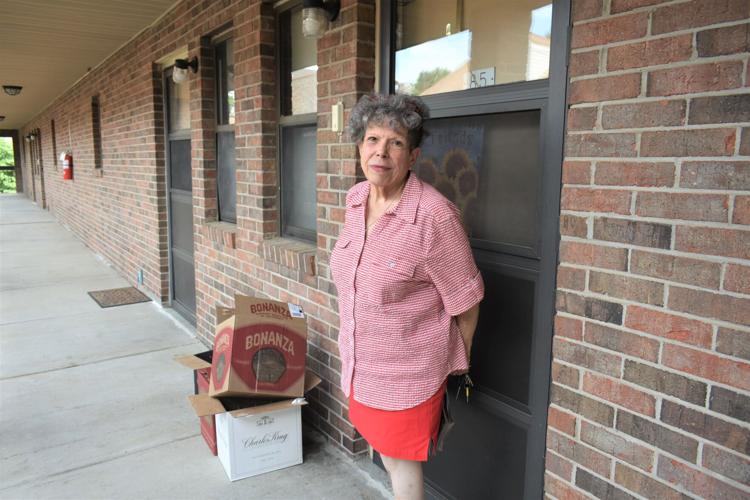 Sheila Richards is one of 33 residents who has until Sept. 1 to relocate after the City of Roswell deemed their building structurally unsound. 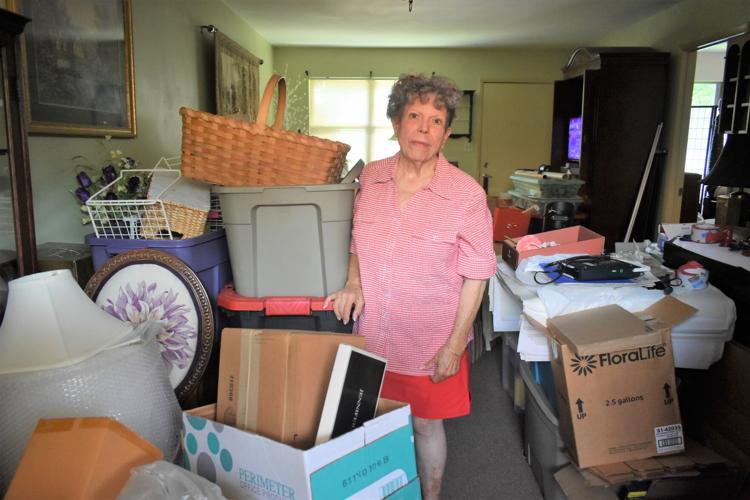 Sheila Richards has carboard boxes stacked across her living room at 199 Grove Way so that she’s ready to move out at any given moment. 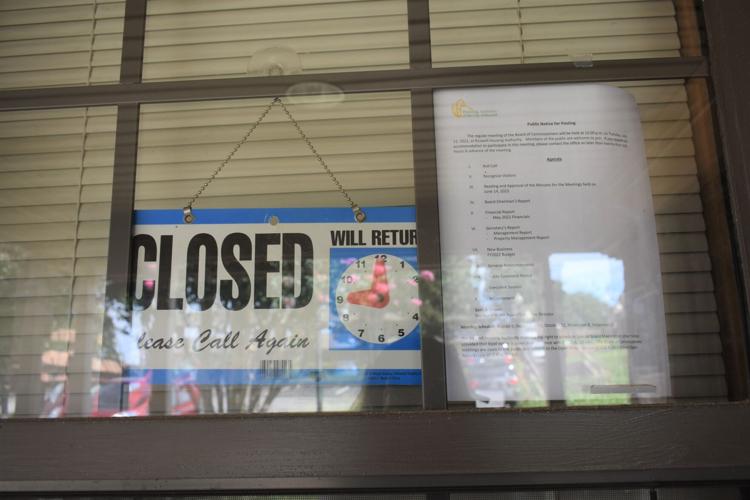 The office at 199 Grove Way closed for the day at around 4 p.m. on July 14. The U.S. Department of Housing and Urban Development hired the Leumas Group to provide administrative support. A staff member is supposed to be on-site every weekday to help the residents relocate.

At 75, she says she’s ready to move out of her apartment at 199 Grove Way if only she could find a landlord willing to take her government-subsidized Section 8 voucher.

The U.S. Department of Housing and Urban Development, or HUD, hired the Leumas Group to provide administrative support. A staff member is supposed to be on-site every weekday to answer residents’ questions, help them find housing and explain to potential landlords how the government-subsidized Section 8 voucher program works.

Richards moved into her apartment in 2002, a couple years after her husband died. Before that, she was a university professor with a PhD and costume designer, a calling she says she answered when she was in high school.

Richards said she’s open to moving outside the area, but it isn’t feasible because she has friends nearby who help her get to her doctor’s appointments in Atlanta. She said she gets so “violently sick” afterward, her doctors won’t let her take an Uber or taxi home.

“In 2000, I was given two years to live by Emory University Hospital,” Richards said. “They had a guinea pig program that they were asking those of us that were waiting for a transplant to take. I signed the contract that I would do all eight [procedures], and that’s how my liver started regenerating. I’m the lucky 1 in 10,000. All the rest of them are gone and dead.”

Richards said she’s already spent hundreds of dollars on rental application fees, only to discover that management won’t take a Section 8 voucher. While she and many of the other residents at 199 Grove Way are eligible for up to $1,300 for moving expenses, only $100 of that money can be used for application fees.

She thought she found an available unit at the 1660 Peachtree Midtown Apartments, but Richards said it differed from the ones advertised online and so dirty and small she would have had to rent a storage unit to cache the rest of her belongings.

Richards said she is No. 161 on the waiting list at the Renaissance affordable housing community and three months out on another.

Her neighbor, 74-year-old Michael Dowda, has had his own troubles finding housing. Richards said she used to cook him dinner, but she’s had to stop because all her things are packed away. These days, she eats off paper plates.

They admit their apartments are in bad shape.

Richards said her screen door doesn’t close unless she forces it, and she can no longer place an egg on the countertop without it rolling onto the floor. The brick wall outside Dowda’s apartment is cracked, filled only with a small piece of cardboard.

Richards and Dowda say they’re running out of time, but that Leumas isn’t being very helpful.

“They won’t even tell us how much our vouchers are worth,” Richards said. “And to be truthful, [Leumas] is only here about three hours a day.”

Dowda said there’s a list of phone numbers outside the complex’s office door, but nobody ever returns his phone calls. At the July 11 Roswell City Council meeting, Dowda asked for help, saying he had experienced homelessness before, for almost four years.

“I’m not going to be homeless again,” Dowda told council members. “I’ll soon get my home in heaven, but we’ve got to solve this problem.”

Dowda said no one from the city has reached out to him since.

He said he’d like to see the mayor and City Council tell him and the other residents, “This is how we’re going to get you from point A to point B.”

Mayor Kurt Wilson said at the July 11 City Council meeting he’s been working with the Housing Authority of Roswell since he was sworn into office in January, because he quickly realized he had “inherited dozens of years of issues” with the agency.

“The first thing that was very apparent to us – to myself and the city administrator – was that we had [approximately] 40 residents that we considered to be in immediate peril from a potential collapse of a building,” Wilson said. “To your point, why wasn’t that addressed in the years past is part of the story that should be written.”

Wilson said because the Housing Authority of Roswell is a HUD program, the city does not have purview, except to deem the building unsafe. He said the pleas for help are not falling on deaf ears.

“I’m responsible for the fact that your building got condemned,” Wilson said. “That was a matter of safety. It was a matter of I was concerned that building would collapse, and I would lose 40 Roswell residents.” 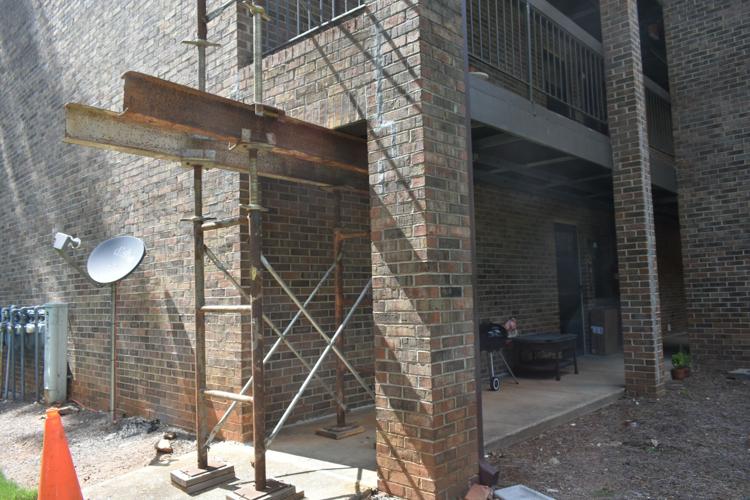 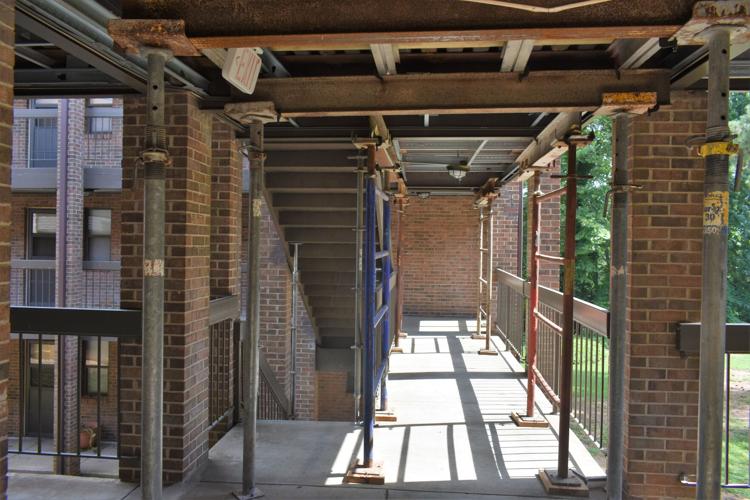 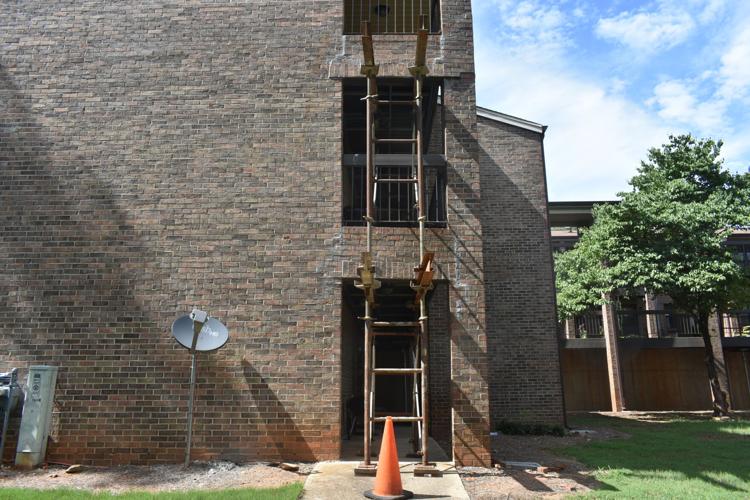 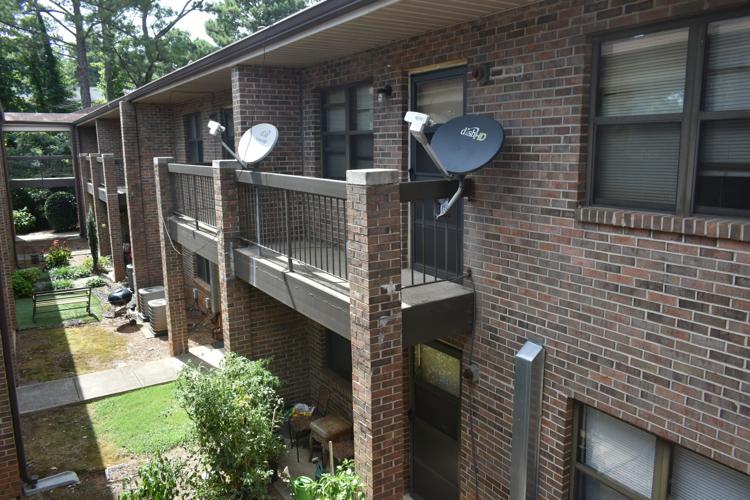 The 199 Grove Way apartments were built in the mid-1980s and sit less than a half-mile from Roswell City Hall. The property is owned by the Roswell Housing Authority. Today it is in disrepair, with some areas being held up by metal supports.

No money to move

Meanwhile, another resident, Wanda Wilbanks, 86, said she’s been given a unit at one of the duplexes across the street, where she previously lived for 37 years with her kids, but that she’s not eligible for the funds to hire movers.

“They said I wasn’t eligible for it, but I still have to move,” Wilbanks said. “I don’t know what I’m going to do.”

Wilbanks retired in 1999 after driving a school bus for 45 years. She moved to 199 Grove Way in 2011 but said her apartment was never painted, and when the carpet was replaced, it was installed on top of the old one, making it difficult to clean.

In 2017, her ceiling fell, breaking her dining room table and ruining her furniture. Wilbanks said she never got reimbursed and the ceiling has started to crack again.

The Housing Authority of Roswell and Leumas have told residents that once the property is redeveloped in a couple of years, they will have first dibs on the new apartments.

Wilbanks said she doesn’t think she’ll still be alive when that happens.

Karen Parrish, chairwoman of the Housing Authority of Roswell, said the goal is to have everyone placed by Sept. 1. Anyone who has not secured housing by that date will be addressed on a case-by-case basis.

“We have residents with specific special needs that we know will be difficult to place and are hopeful to find suitable housing for each resident as soon as possible,” Parrish said. “This timeframe has been established through working jointly with HUD and the City of Roswell as well as the Marietta Housing Authority who is issuing the vouchers.”