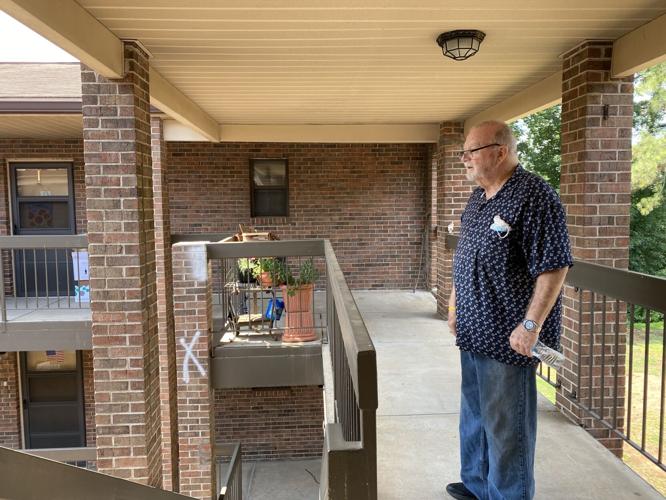 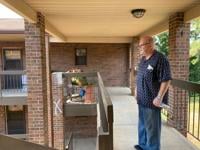 Vietnam War veteran Michael Dowda is one of 33 residents who live at 199 Grove Way and are being asked to relocate because their building has been deemed structurally unsound by the City of Roswell. They have until August to leave. 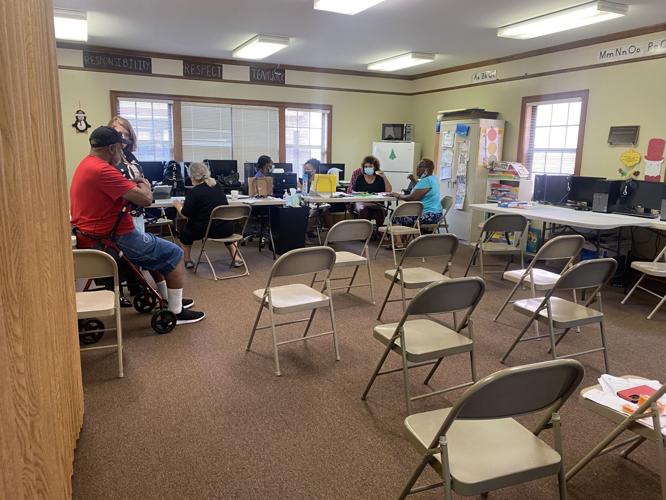 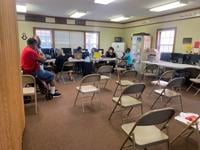 Beth Brown, executive director of the Gainesville Housing Authority, and several staff members with the Leumas Group meet with residents at the apartments, formerly known as Pelfrey Pines, on July 6 to answer any questions about their relocation.

He had been on the waiting list for an apartment at the complex for more than two years.

The building, formerly known as Pelfrey Pines, consists of 40 units built in the mid-1980s. It sits within a half-mile of Roswell City Hall.

In March, Dowda and his neighbors received notice the property had been condemned because of structural issues and they would need to find someplace else to live. Many of the residents have lived there for more than 20 years and are elderly and/or disabled. They have until the end of August to leave.

Dowda, 74, said he’s worried about his friends and himself. He is a retired attorney and served in the U.S. Air Force for two years. He lives alone in his apartment with his dog, Alfie.

“These are good folks here and they deserve better,” Dowda said. “A lot of people here, they don’t understand this [Voluntary Tenant Relocation Program]. They may or may not have the mental capacity to be involved in this. To them, this is their last place to live.”

“My heart breaks for where we are right now,” Brown said. “I don’t know what’s going to happen if you don’t jump on board and help us help you.”

A similar meeting took place in May, but because of the urgency and challenges they’ve faced in finding housing, a second meeting was arranged to meet with residents. The situation comes two years after the start of the COVID-19 pandemic when a moratorium went into effect banning evictions for failure to pay rent.

Over the years, Roswell city officials have been reticent of building new apartments, saying the city already has its fair share in North Fulton. In May, the City Council approved a text amendment to the Unified Development Code banning the construction of new standalone apartments.

Margaret Fancher, 75, said she has a friend who’s been living at the apartment complex for 20 years.

While the pair have known each other for nearly six decades, Fancher said her friend can’t move to Athens to live with her, because it would take about four hours to get her to her doctor’s appointments in Roswell and back.

“This is a mess,” Fancher said. “It’s a giant mess. … When you look at the building itself, her doors don’t shut anymore. There are cracks. The air conditioner compressor runs all the time. They won’t fix anything, and they’re not going to salvage any of this. I feel sorry for everybody. This is the worst time of the year to move, too.”

Another resident, who is blind, said her sisters live close by and visit her as needed, but her main concern is that she will lose access to public transportation if she moves. She’s lived in her apartment since 2001.

This isn’t the first time residents have raised concerns either.

In 2017, a mother said she and her family had been forced to sleep outside in a tent because of mold inside their apartment. Neighbors said they had repeatedly asked management to work on the problem but to no avail. 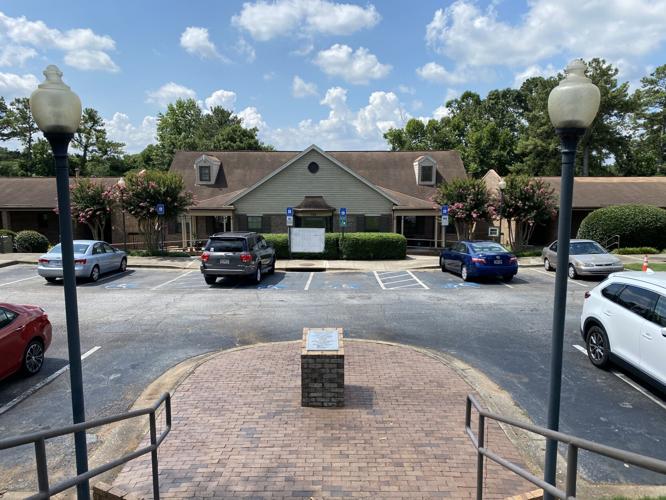 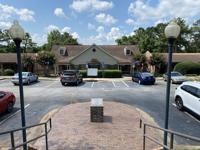 The 199 Grove Way apartments, formerly known as Pelfrey Pines, were built in the mid-1980s and sit less than a half-mile from Roswell City Hall. The property is owned by the Roswell Housing Authority. 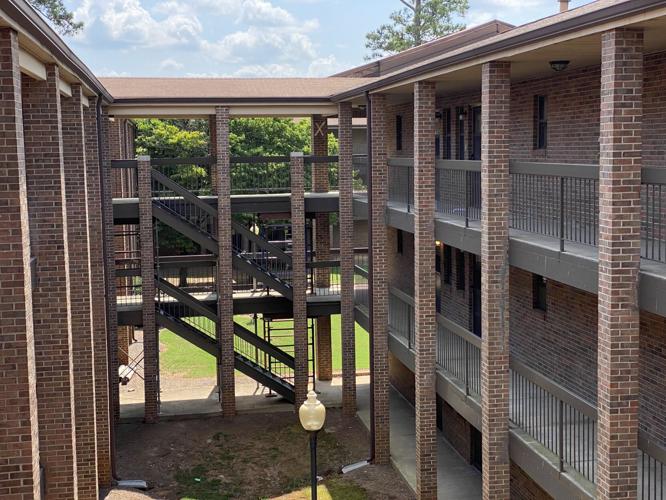 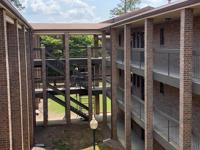 Areas around the building are being held up by metal supports. The City of Roswell has inspected it and rendered it unsafe. 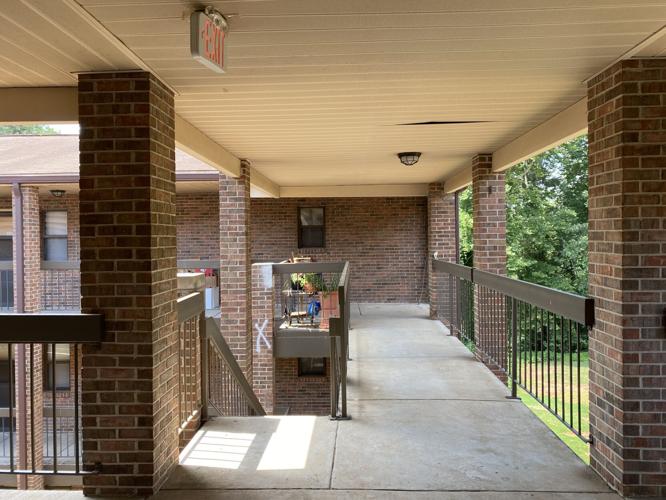 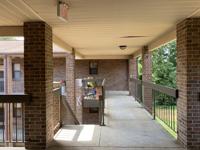 Beth Brown, executive director of the Gainesville Housing Authority, says the City of Roswell has inspected the building and rendered it unsafe. Areas that need work are marked in “X”.

The 199 Grove Way apartments, formerly known as Pelfrey Pines, were built in the mid-1980s and sit less than a half-mile from Roswell City Hall. The property is owned by the Roswell Housing Authority. Today it is in disrepair, with some areas being held up by metal supports.

The 199 Grove Way apartments, formerly known as Pelfrey Pines, were built in the mid-1980s and sit less than a half-mile from Roswell City Hall. The property is owned by the Roswell Housing Authority.

Areas around the building are being held up by metal supports. The City of Roswell has inspected it and rendered it unsafe.

Beth Brown, executive director of the Gainesville Housing Authority, says the City of Roswell has inspected the building and rendered it unsafe. Areas that need work are marked in “X”.

Brown told Appen Media after the meeting she became aware of the building’s structural issues soon after she joined GHA in 2012. Around that time, they hired an engineering company to assess the building. Then, in 2021, GHA applied for the Low-Income Housing Tax Credit Program, but the application was denied. The program provides tax incentives on new construction and substantial rehabilitation on existing properties with an eye toward the underprivileged.

From there, Brown said the City of Roswell inspected the building, rendered it unsafe and condemned it. Brown said GHA has since been working with the U.S. Department of Housing and Urban Development, or HUD, to relocate the 33 tenants. Out of the 33, Brown said 20 are still in need of housing.

“This was a very proactive approach from the housing authority’s perspective,” Brown said. “We’re the one that initiated all the engineering studies, we reached out to HUD, we reached out to the city, we’ve just been taking this very proactively in order to make sure the residents are living in a safe and stable community. Unfortunately, things beyond our control have led us down the path that we are right now.”

Brown said HUD hired the Leumas Group to provide administrative support. A staff member is on-site every weekday to answer questions and help with their Tenant Protection Vouchers, which do expire but can be extended under extenuating circumstances.

The vouchers, which were issued by the Marietta Housing Authority, are good for the rest of the tenant’s life and can be used anywhere in the country as long as he or she remains compliant with the program requirements.

The problem tenants are facing, Brown said, is that Georgia is not covered under the Income Protection program, meaning landlords do not have to accept vouchers and can set income requirements.

“We’re trying everything we can do,” Brown said. “We’re working and trying to convince landlords to take vouchers, but we cannot make something that doesn’t exist, and we cannot force a landlord to take a voucher. So, we’re just going to continue to work with them.”

LaToya Ellis, tenant relocation coordinator with the Leumas Group, told tenants at the July 6 meeting that they can receive up to $1,600 to pay for transportation costs to scope out potential apartments, application fees, background checks and moving expenses, plus the security deposit.

Ellis told tenants she understands many of them have roots in the community.

“I know you’re familiar with the area, but because of where we are right now, this is, unfortunately, the reality,” Ellis said.

The Drake House says that affordable housing is a concern for 95% of area residents they polled in a recent survey.

Brown said housing authorities redevelop their properties all the time, because their housing stock across the country is typically between 50 and 80 years old. But, she said, this is the first time in her career that a building has been deemed structurally unsound.

“I’ve relocated hundreds of people,” Brown said. “I know how stressful it is. I know how challenging this is. I know that your housing security is the most important thing in your life.”

GHA is working on a replacement plan for HUD to redevelop and bring the building up to code. The project is expected to take several years, and when completed, the tenants will be given the opportunity to come back.

“It would not only replace our existing housing but add additional affordable units to the mix as well,” Brown said. “… We’re working with the Department of Community Affairs, Roswell’s city government and other nonprofits to help us come up with the best plan, but as you can imagine, construction costs and the economy right now have had a major impact on the ability to build affordable housing.”

Brown encourages any owner or landlord who wants to work with GHA and is willing to take a voucher to email her at bbrown@gainesvillehousing.org, or call 770-536-1294, Ext. 205.

Think you can help or have more information for this story? Email chamian@appenmedia.com.