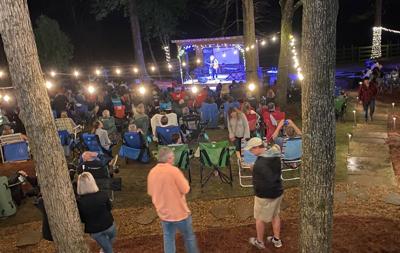 The concerts, which are slated for the second Saturday each month, are in partnership with Nashville’s Bluebird Café and bring well-known singers and songwriters to Milton to perform acoustic sets and allow artists to delve further into their stories and share insight behind their tunes.

“It’s a cool thing for this area, to be able to do something like this in Milton,” Painted Horse owner Pamela Jackson said. “We’re not Buckhead or Atlanta, so to get to [an event] like this people usually have to travel quite a distance. This is right in their neighborhood and a great opportunity.”

The Uncorked series previously made its Atlanta-area home at Painted Horse with Saturday’s concert serving as the kickoff event for the 2021 series, highlighted by a performance from Steele.

A 2013 Nashville Songwriter Hall of Fame inductee, Steele has written over 85 top-10 songs, including “What Hurts the Most,” also performed by Rascal Flatts.

“Steele does quite a show,” Jackson said. “The event itself was fabulous, people loved it. It went smoothly, there were no issues and we had a great turnout.”