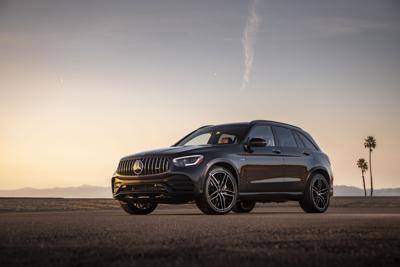 Between the standard GLC, Mercedes’ top-selling crossover in the U.S., and the lunatic-fringe GLC 63 performance model, sits the AMG GLC 43, a blend of everyday usability with plenty of athleticism and power.

With any happy medium between two extremes there are bound to be sacrifices, and the GLC 43 is no exception.

The 43 isn’t as comfortable on the road as the standard GLC and costs about $16,000 more than a base all-wheel drive model, and it cannot compete with the ridiculous performance of the 63, which offers a staggering 469 horsepower. But those looking for a small luxury crossover with a generous dose of performance and athleticism, the GLC 43 fits the bill.

The revamped-for-2021 Hyundai Santa Fe should be on the short list for those after value, practicality, curb-appeal and extensive features in …

The GLC 43 formula is to build on the standard model by slotting a twin-turbo V6 under the hood with an AMG-tuned transmission and sporty suspension, update the exterior for a bolder look and add features like ambient lighting, LED headlights, AMG’s performance steering wheel and other amenities.

All GLC 43 models come with all-wheel drive and are either available as a standard crossover or as a fastback “coupe.” Coupe versions sport a more aggressive — and subjectively better or worse —overall look but reduce practicality for rear passengers and cargo.

The 43’s performance shuns the typically lumbering nature of most small crossovers and puts real zest into the daily commute. Its power is put down swiftly to all four wheels as the V6 rapidly and smoothly runs its paces, with the 9-speed automatic transmission (with paddle shifters) charging through the cogs to serve up lightning-quick changes.

That added dose of power isn’t wasted in the corners. Along undulated paths, the 43 performs more like a hot hatchback than a small crossover. 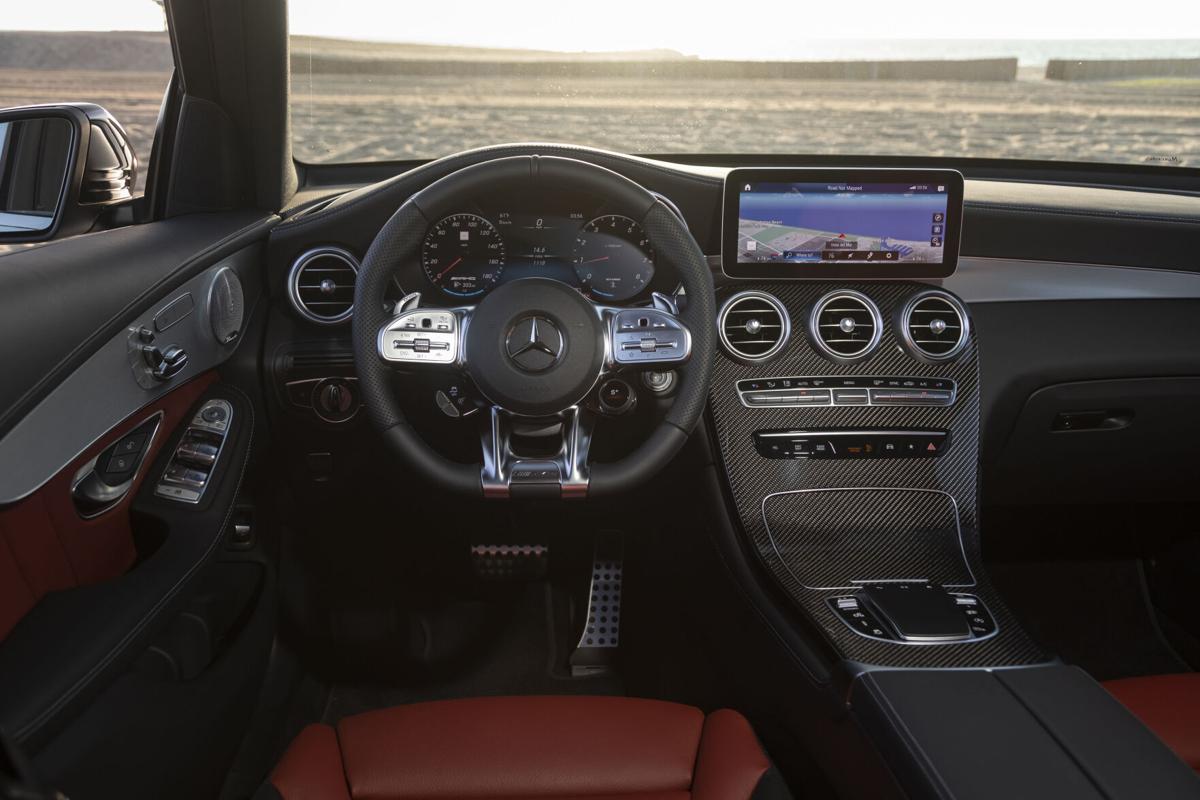 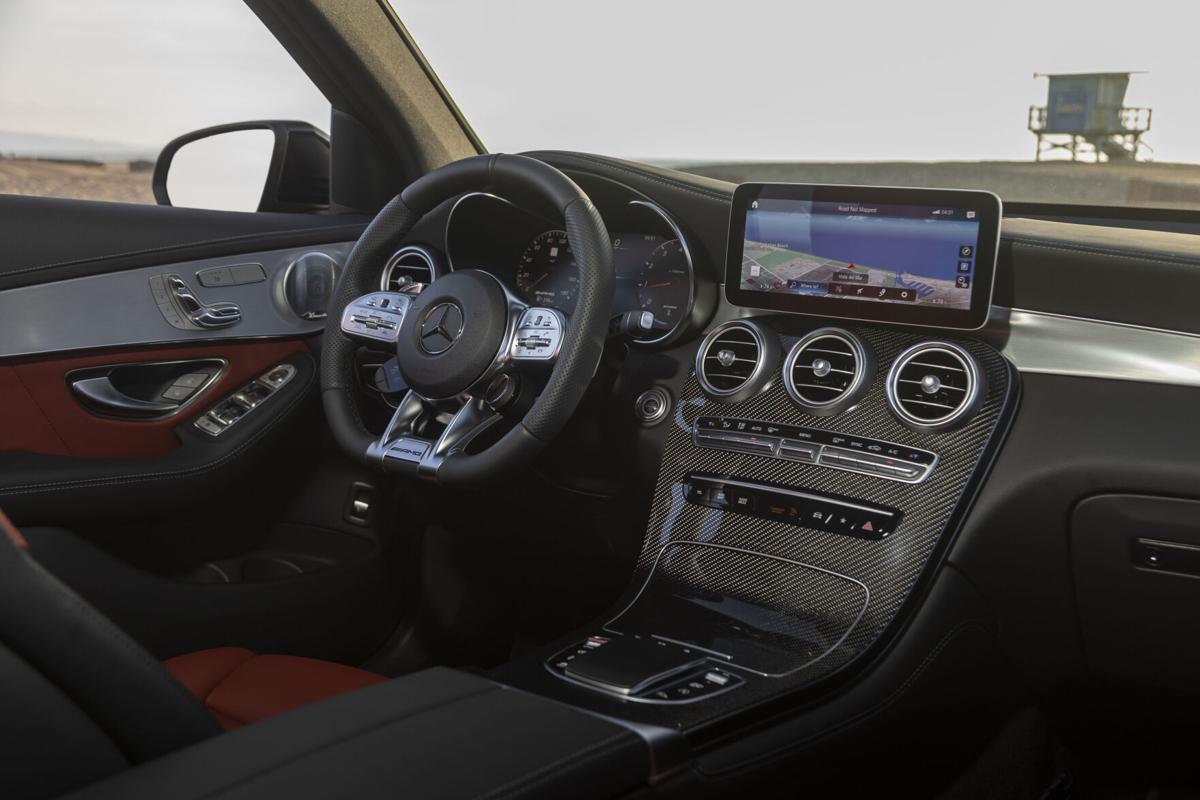 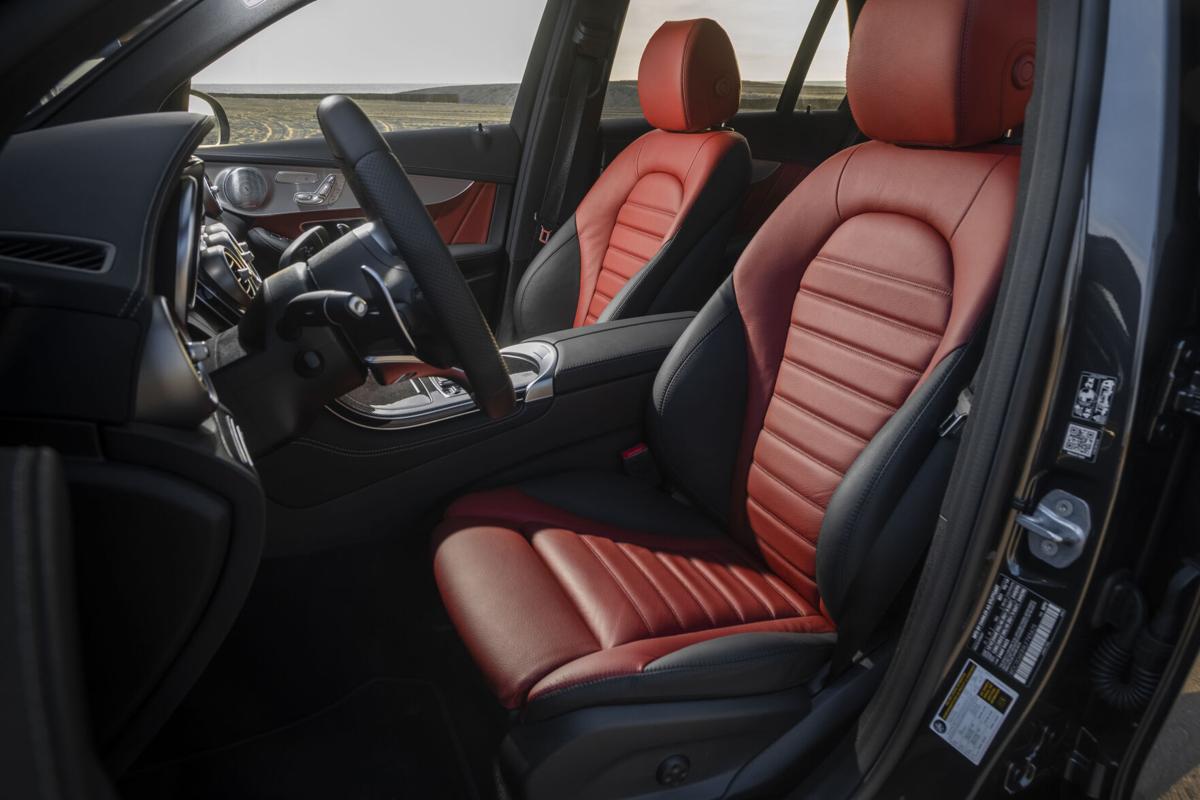 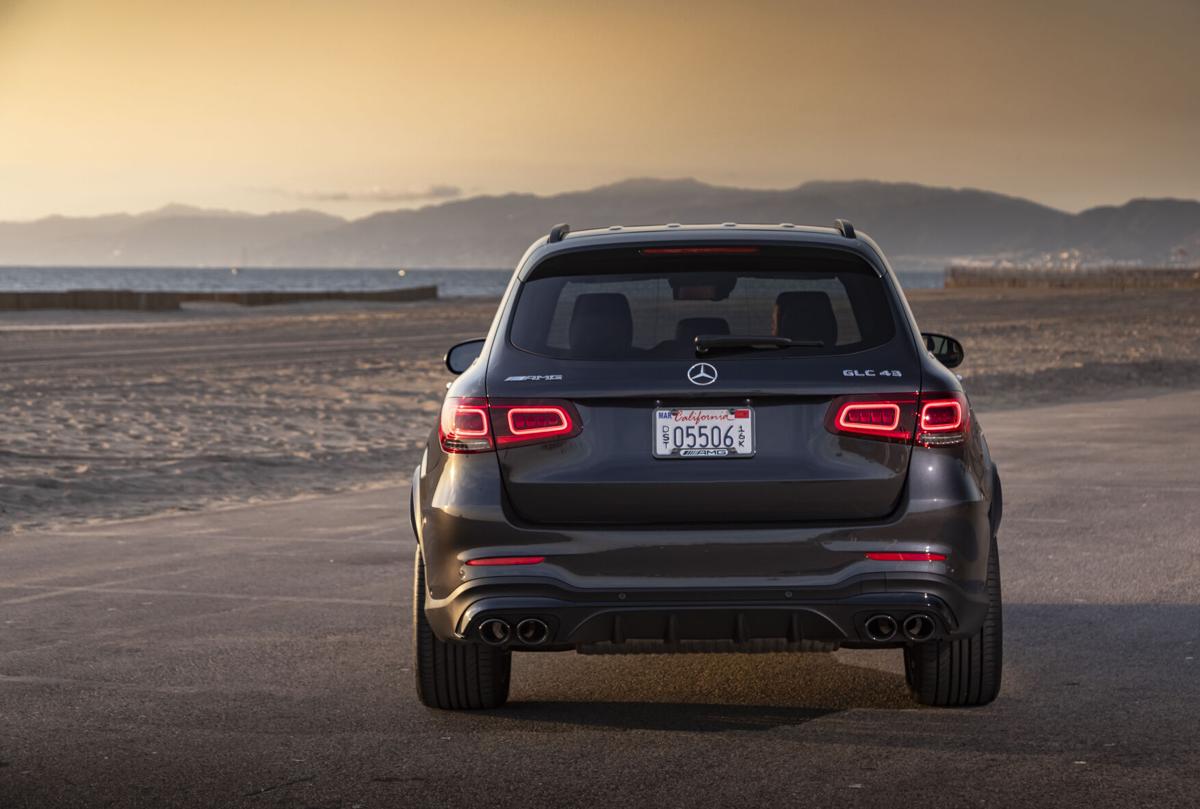 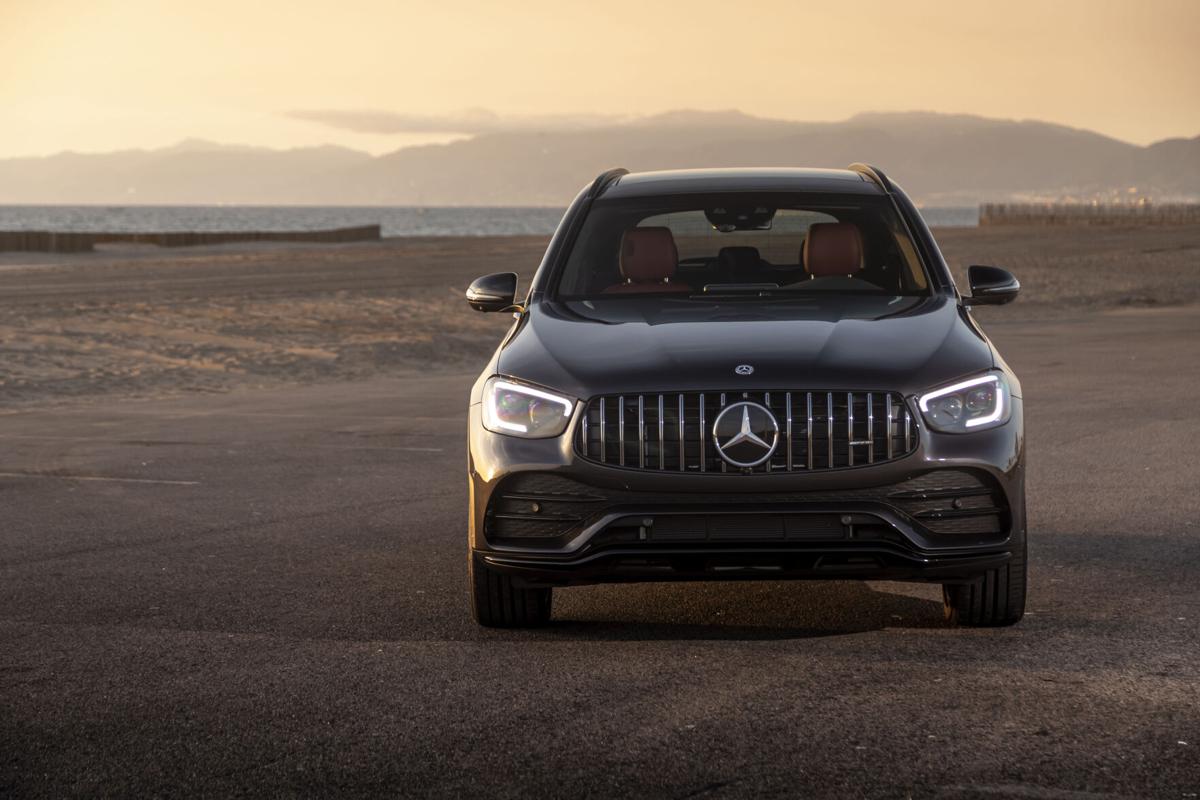 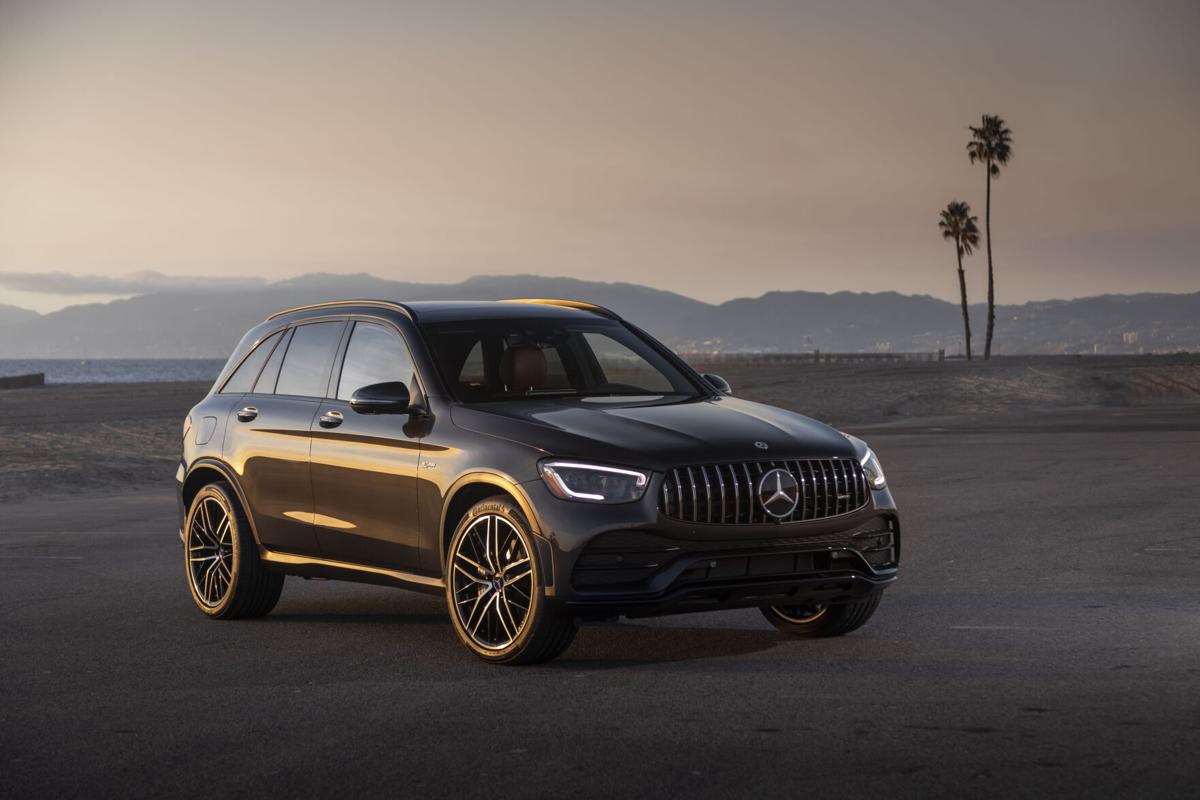 Adaptive dampening and  a multi-chamber air suspension keeps the GLC in check through switchbacks with prodigious grip available to drivers. Steering is accurate and appropriately weighted in all driving modes, with Sport or Sport+ tightening the reins, so to speak, and providing accurate feedback.

From the everyday grocery run to attacking a twisty backroad, the GLC 43 is a prime performer.

The cabin is also a nice place to be. The 43 comes standard with creature comforts like dual-zone climate control, heated, power front seats with driver memory, a 12.3-inch digital gauge cluster and 10.25-inch infotainment screen and faux leather seats.

Front passenger space is ample, with rear passengers given plenty of legroom.

There are also several options packages and individual add-ons like ventilated front seats, navigation with augmented video that displays pertinent information through a live feed, Nappa leather seats and the Driver Assistance Package ($1,700), which includes an extensive suite of safety features and driver’s aids.

Sonata N Line is a strong performer with subtlety

The 2021 Hyundai Sonata N-Line’s 2.5-liter turbocharged four-cylinder is a generous sprinkling of lemon zest in a beurre blanc. It’s the appre…

While the 43 certainly has its strong suits, it’s not all a bed of roses.

The cabin is not as ultra-modern as some other AMG offerings, and there are some lower-scale fitments like veined plastic on the dash. The touchpad for controlling the infotainment system can be annoying to use. The rear cargo area allows for 17-cubic feet of storage space, significantly smaller than some other luxury performance crossovers of a small nature.

And when you aren’t corner carving or racing through the lights, ride quality can be harsh. The shift from first to second gear is invariable jarring, and downshifts at lower speeds can be rough.  The brakes, which are extremely effective on spirited drives, can be grabby in stop-and-go traffic.

So, the 43 is caught between sensible and ridiculous in the GLC lineup, and those attributes show. Buyers are bound to appreciate its added gusto and capabilities but will have to deal with some rough road manners and a notably higher price tag over the standard GLC.

But for those willing to make that sacrifice, the 43 sticks out in the mostly boring small crossover crowd.

The Durango Hellcat is lovable overkill

Overall: GLC 43 buyers must make some sacrifices in everyday driving situations over the standard model, but the tradeoff is considerable power and performance and when the mood strikes.