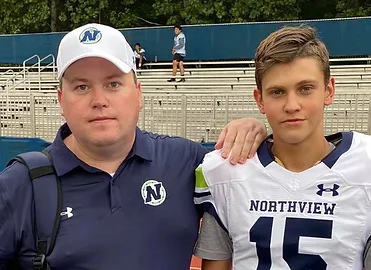 Adam Cleary stands with his son Gavin. Cleary, who is the Northview Jr Titans Liaison for Johns Creek Hawks Football, has been trying to partner with the city to support and promote the Hawks. 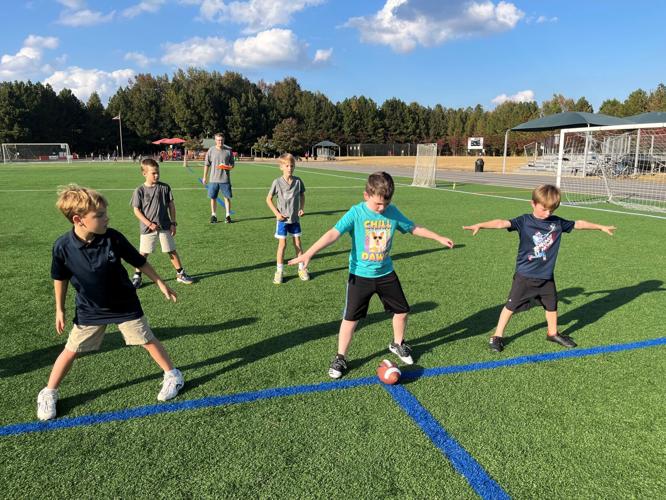 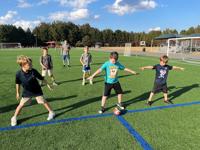 Second and third graders, who play with the Hawks association, practice for an upcoming football game.

JOHNS CREEK, Ga. — Adam Cleary, a board member for Johns Creek Hawks Football, is about at his wit's end after his many failed attempts to garner support from the city for youth football.

The Johns Creek Hawks, also known as the Johns Creek Youth Football Association, is a K-5 flag football, community-wide program. The association is led by volunteers, like Cleary.

He’s faced the ongoing issue of not having dedicated field space in the city. With no home base, Cleary is left scrambling to find practice fields, and when he finds one, he has to pay rent.

“To be perfectly honest, I’m gasping for air to keep this mission alive and almost ready to tap out and look for greener pastures in another city if our community leaders lack the interest in its value,” Cleary said.

When young players don’t have the infrastructure to practice, numbers and talent at the middle and high school levels suffer, Cleary said. The Hawks are separate from the football feeder program, but are foundational for middle school teams, whose players move onto the high school level.

Cleary wears multiple hats and sees football at a few different angles. He works alongside the Hawks to develop elementary-aged football players, but he’s also the president of Northview Jr Titans Football, one of the four middle school feeder programs in Johns Creek. He’s also the head coach of the eighth grade team.

All of Cleary’s sons do or have played football. He described what it was like to watch his oldest play and have other male role models. He also described the overwhelming inclusivity of the sport and its positive effect on kids’ health.

“One of the reasons I push for [football] so hard is because it can change a lot of kids' lives who are in tough situations,” he said. “It needs to be a sport here.”

Brooke Liley, president of Chattahoochee Jr Cougars Football for the past three years, faces similar issues. The feeder programs also run without tangible support from the City of Johns Creek.

“The numbers are down,” Liley said.

Liley said there were 60 kids this year, but that number is still “extremely low.”

Liley wants to mirror what the City of Milton does at Bell Memorial Park where the North Atlanta Football League provides youth tackle (grades 2-5) and flag (K-5) football leagues and camps to Milton and Alpharetta residents.

“It's hard to be competitive when these kids aren't playing at younger ages,” she said.

The Jr Cougars, as with other feeder programs, must rent the high school fields. The organization spends about $6,500 a season, a “huge cost,” which includes the field, the lights, any security and janitorial services.

“Every time you step on the field, you have to pay for it,” Liley said.

Cleary said he’s tried getting the city to host the Hawks at Shakerag Park in Johns Creek – to no avail. He’s now set his sights on the new Cauley Creek Park.

The $26 million park development project is set to have two turf and two grass multi-purpose fields. Because football is a single-season sport, Cleary wants to primarily use them in the fall for games as well as for some summer conditioning.

Johns Creek Recreation Manager Kirk Franz said decisions on how Cauley Creek will be used is being vetted out through the 2016 Master Parks Plan update. The update, to be completed by the end of the year, involves a near-$157,000 contract with PROS Consulting.

The update includes community surveys. But, to Cleary’s chagrin, he said the survey had no mention of the word “football.”

Survey results were presented Sept. 22 at a public input meeting for the Parks and Recreation Strategic Plan. While the results do not mention anything about youth football, they touched on other sports, like pickleball.

“There are some Parks and ‘Wreck’ problems here!” Clearly wrote in an email describing the survey.

Outside of Johns Creek-sponsored adult coed softball, the city’s sports programs are provided through park associations which partner with the city through contractual agreements. The volunteer-run organizations, like the Hawks, are left to their own accord.

“If we didn't have park associations, I'd have to have a staff of at least a dozen people to run the programs that these volunteers do, right?” Franz said. “So, it’s a win-win for the city.”

Franz said employees in the Johns Creek Public Works Department, which supervises Parks & Recreation, are contracted workers from Jacobs Engineering. There are around four full-time employees, including himself, and a handful of part-time workers. Volunteer-run associations do the footwork that the department can’t do alone.

Ocee Park Athletic Association manages all recreational programs offered at Ocee Park, which has eight softball/baseball fields and one T-ball field. Established in 1993, the association sponsors youth baseball and softball programs for boys and girls ages 5 to 16.

But Cleary said the Hawks differ from the Newtown program. The Hawks are more focused on development, traveling to compete, whereas Newtown is passive recreation, he said.

The facility usage agreements with the city allow the nonprofits to freely use their respective park for sports, provided they invest in park improvements. Apart from 2021 during the pandemic, the financial contributions to the city from each organization is set at either 5 percent of gross park-related program and concession fees or $25,000, whichever is greater.

Cleary said those charges aren’t viable for the Hawks. He said 20 to 40 percent is a reasonable bargaining discussion because the program recently restructured. While the Johns Creek Youth Football Association has been around for more than 20 years, the association rebranded into the Hawks a couple of years ago.

Exceptions can be made, though. In the facility usage agreement between the city and Autrey Mill Nature Preserve and Heritage Center, the preserve is only required to pay 5 percent of its revenues toward park improvements.

Cleary said he’s open to any kind of arrangement with the city.

“We as a city simply just don't have plenty of fields where we can say, ‘Okay, well, each sport can have their own dedicated field,” Franz said. “We have to be very flexible and versatile in how we use our fields.”

Cleary’s predicament is familiar to those involved in other youth sports in the city, like soccer, basketball and lacrosse, cricket included.

The Johns Creek Cricket Association also doesn’t have any contractual agreement with the city. But the sport has seen some triumphs in the past few years with the addition of six cricket batting cages and two turf cricket pitches at Shakerag Park, which are some of the only municipal cricket facilities in the Southeast region, according to an Aug. 18, 2021, agenda report for the Johns Creek Recreation and Parks Advisory Committee.

Leadership Johns Creek, a civic organization that fosters community involvement, also unveiled the state’s first cricket electronic scoreboard in 2020 at Shakerag, a $25,000 project funded by members of Cricket TEAM (Together Everyone Achieves More).

And in 2020, Johns Creek issued a Request for Proposal (RFP) seeking a youth-focused recreational cricket partner. TEAM applied, but the city decided the association didn’t have enough experience. The following year, the city re-issued the RFP and selected Atlanta Cricket League.

After the facility usage agreement was awarded to the league, a subsidiary organization related to the Atlanta Cricket League sent emails in violation of the Purchasing Policy. All bids were then rejected.

At its Oct. 17 meeting, the Johns Creek City Council renewed an existing agreement with the City of Alpharetta for its Parks Without Borders program that waives non-resident fees for participants in youth softball, baseball, lacrosse and soccer programs held in the two cities.

Football was not listed in the agreement.

The agreement was originally on the consent agenda, but it was called up for discussion because of the football exclusion. Chris Haggard, Johns Creek assistant Public Works director, said the reason lies in what Johns Creek can offer, or what it can’t.

“At this point, we don’t have much football to offer to their side,” Haggard said.

He also said the city doesn’t know enough about Alpharetta’s football programming. But he added that it’s a conversation Johns Creek and Alpharetta will continue to have.

Haggard said that it’s not possible with current staff and explained the city’s model with regard to partnering with park associations.

“We do need to look at how we get support for feeder youth sports, especially football,” Mayor John Bradberry said.

While Councilman DiBiase supported the renewal to prevent delay, he stressed the city must have an “honest conversation” about program structure and what resources can be put forward to make Parks without Borders successful in a way that may include youth football.