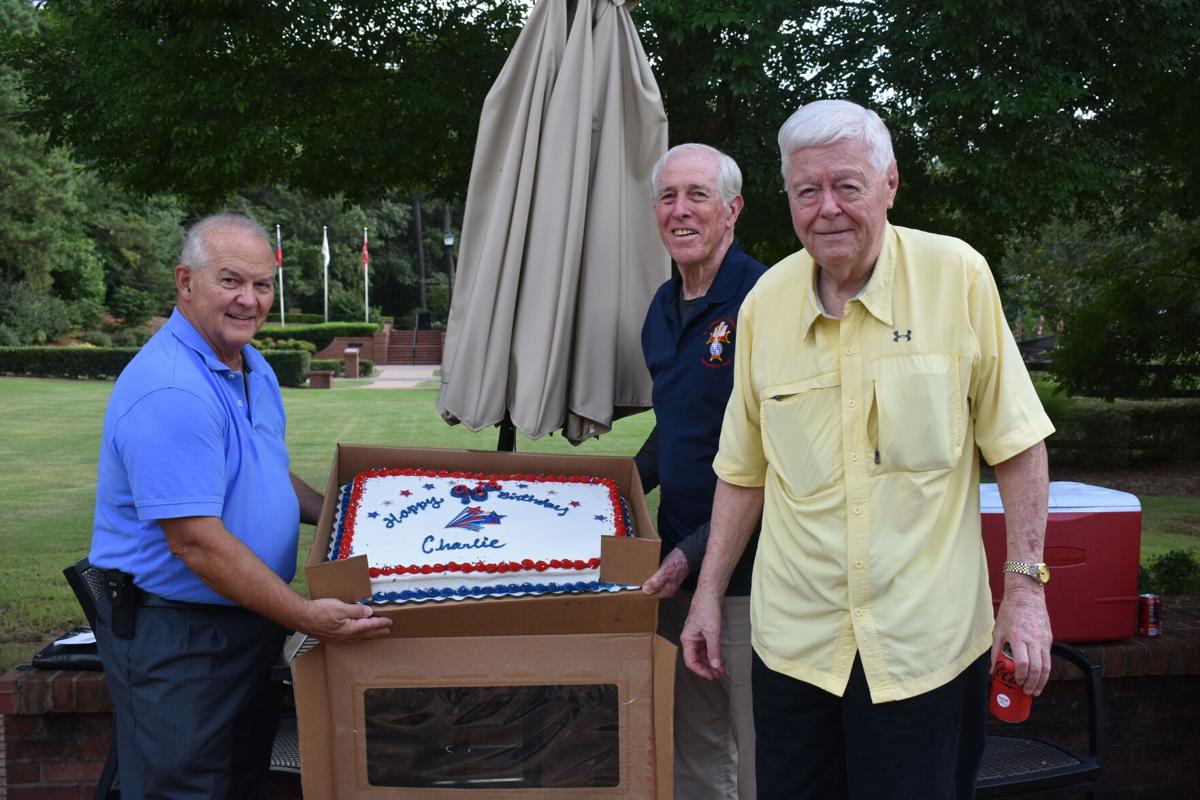 The Johns Creek Veterans Association had a small gathering Aug. 26 to celebrate Charlie Kelly’s 90th birthday. The party, which took place at Park Place at Newtown School, was complete with refreshments and a red, white and blue birthday cake. 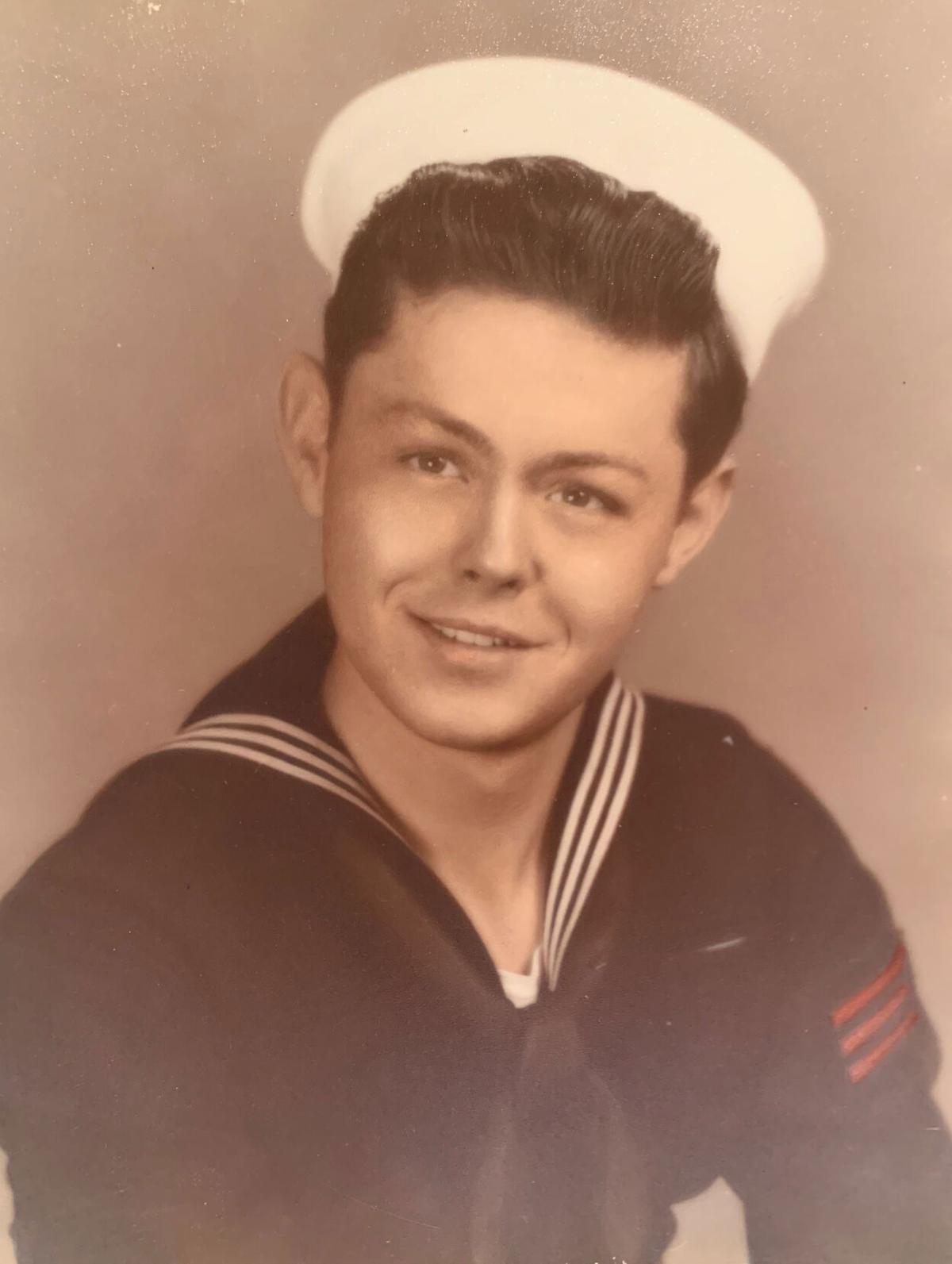 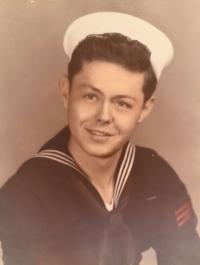 Charlie Kelly served four years in the Navy Reserve and two years on active duty in Korea, where he reached the rank of machinist’s mate third class and earned 11 ribbons and medals and two battle stars. Shown is Charlie just weeks before he left Norfolk, Virginia, for the war in Korea.

JOHNS CREEK, Ga. — Despite his age, Charlie Kelly can draw from memory nearly any story you want to hear.

He remembers the aftermath of the attack on Pearl Harbor, growing up during World War II and serving in the Korean War. He can also recount numerous stories about accompanying his father, the Rev. Charles M. Kelly, to the so-called “death house” at the old South Carolina state penitentiary in Columbia.

“This guy’s an amazing historian,” Mizell said. “I mean, the stuff that he knows. It’s amazing to sit and listen to him talk about all the stuff that he’s been through. His stories are phenomenal.”

According to the Korean War Veterans Memorial Foundation, there are about 500,000 Korean War veterans still living, but about 600 die every day. Most of them are now in their early to mid-90s.

Growing up, Charlie said he always knew he wanted to make a career in the U.S. Navy or be an attorney. In high school, and with permission from his parents, he joined ROTC. Later, he attended the University of South Carolina to study pre-law. But his desire for a taste of the Navy remained.

Charlie said there was a “great sense of patriotism bursting all over” at the time. He recalled walking out of church Sunday, Dec. 7, 1941, after his father had just preached his sermon and hearing the newsboys talk on the radio about the attack on Pearl Harbor.

“I was in the fourth grade,” Charlie said. “They immediately started registering men for the draft, and there were just all these men who volunteered. I also grew up near Fort Jackson in Columbia during World War II, when Lt. Col. Jimmy Doolittle trained his fliers to carry out a strike with B25s. One of the copilots attended our church for a couple of weeks, and then he was suddenly gone.”

Another memory that sticks out to Charlie is D-Day.

“When the allies launched their invasion against France,” Charlie said, “the community planned to have the church bells ringing all day, and I remember that the church bells rang all over Columbia and people came to church all day that day to pray.”

“It was a vastly different experience during World War II than what we’re getting today. There was just a sense of urgency, a sense of patriotism, a sense of love so to speak,” Charlie said.

He would go on to serve four years in the Navy Reserve and two years on active duty in Korea, where he reached the rank of machinist’s mate third class and earned 11 ribbons and medals and two battle stars despite never seeing the battlefield.

“We were sealed up down there in the engine room and you could hear guns roar, but I never saw any of it because I was down there opening and closing the throttle,” Charlie said with a short laugh.

He returned home after the ceasefire was signed in July 1953, formally ending the war in Korea. He met his wife of 64 years shortly afterward while working in Miami. They have one son and one grandson together.

Charlie said he had planned to go back to law school following his time in the military, but instead he was promoted at his local Woolworths store from manager to regional office executive in Atlanta to the corporate headquarters in New York, where he stayed for 14 years. He spent five of those years as the president of the Woolworths PFD Food Services.

In 1987, Charlie moved back to Atlanta and retired early. However, he continues to enjoy meeting with the Johns Creek Veterans Association and pursues hobbies like woodcarving, fly-fishing and reading.

In 2016, Charlie wrote a book, “Next Stop, Eternity,” which recounts both the history and his accounts of the 34 executions his father witnessed while he was the lead chaplain at the state penitentiary in South Carolina.

He said he hopes the stories shine a light on the crimes and punishments of an era of racial tensions and controversy about the death penalty. But at 90 years old, Charlie thinks his writing days are over and has no plans to write another book.

“Next Stop, Eternity,” can be found on Amazon or online at LifeRich Publishing.