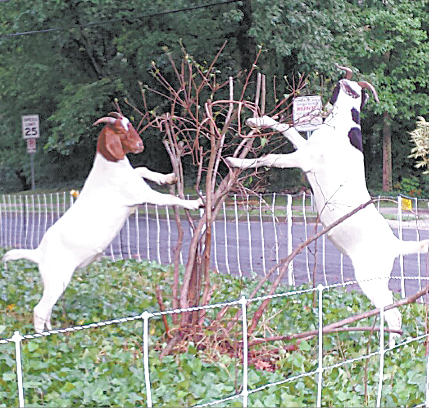 Kingsley residents got a week’s worth of entertainment from these brush-clearing goats, but a billy goat gruff from the city of Dunwoody cited the family for placing a protective fence too close to the sidewalk. 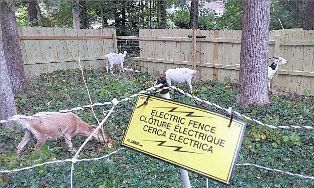 An electric fence was moved away from the sidewalk to satisfy the city’s citation.

Kingsley residents got a week’s worth of entertainment from these brush-clearing goats, but a billy goat gruff from the city of Dunwoody cited the family for placing a protective fence too close to the sidewalk.

An electric fence was moved away from the sidewalk to satisfy the city’s citation.

When Sheryl and Michael Rechtman finally made their long awaited move from Peachtree Corners to a house in Kingsley, their corner lot was so overgrown with weeds, including poison ivy, that they couldn’t venture into it to clear it out or even let their dog into it.

“It was so overgrown we couldn’t even tell what was in there,” said Sheryl Rechtman.

Rather than use chemicals or a yard service to clear out the area, the Rechtmans decided to use a more affordable, environmentally friendly option some friends had used: They rented goats. Thirty of them.

Goats are an increasingly popular answer to clearing out unwanted vegetation. They eat everything people want to get rid of, including poison ivy and kudzu, but don’t touch ornamentals like azaleas and rhododendrons. In addition, they work fast and don’t cost much.

From the moment the goats arrived at the Rechtmans’ home on Saturday, Sept. 19, neighbors began stopping by to admire them and chat with the new homeowners.

“I can’t tell you how many neighbors we’ve met because of the goats,” said Rechtman.

One of those people was City of Dunwoody Assistant Attorney Lenny Felgin, who paid the Rechtmans a visit the day after the goats arrived.

“He came speeding into our driveway and said, “You’re getting three citations tomorrow,’” said Rechtman.

In an interview with the Crier, Felgin said it wasn’t the goats he objected to. It was the temporary electric fence that was in the city right of way on the Dartford Drive side of the property.

“I live down the street,” said Felgin, “and was concerned that the electric fence was too close to the sidewalk.” Felgin felt that the fence posed a danger to children who might be playing on the sidewalk.

On Monday, Rechtman came home from work to find that the citation issued by the city was an unthreatening “Code Compliance Courtesy Notice” that asked them to move the fence out of the city right of way.

“People in Kingsley have been so friendly to us,” said Rechtman. “We were really pleased that this was just a courtesy notice.”

Luckily, when she found the citation, the owner of the goat rental company, Mike Swanson of GetYourGoatRentals, was there doing his daily check-up on his goats and offered to come back with an assistant the next morning to pull the fence back a few feet.

With the fence in its legal position, the Rechtmans and their neighbors were free to enjoy the goats for the rest of the week.

“He [Felgin] was the only one who was negative the whole time we had the goats,” said Rechtman.

For the week the goats were there, the Rechtmans’ corner of Kingsley was actually a popular neighborhood attraction.

“So many cars stopped to look we almost had a traffic jam,” said Rechtman. Mothers with children in strollers stopped by everyday to observe the goats. Walkers took pictures.

Besides for eating all of the Rechtmans’ weeds, including the poison ivy, and entertaining the neighbors, the goats offered some helpful psychological benefits as well.

“They’re the sweetest things,” said Rechtman. “At night they rest their little heads on each other. During the day they make little neighing noises.”

Though she never entered their area, Rechtman enjoyed watching them, talking to them and petting them over the fence. However, the goats’ peaceful demeanor was apparently so irresistible to one neighbor that she admitted to Rechtman that she climbed over the electric fence and sat with the goats one night for two hours.

Now that the goats are gone, everyone realizes what a good job they did. Though they gave the Rechtmans’ yard a rather munched quality, it is now manageable. And they also served the important social function of bringing people together.

“They were a good way for us to meet our neighbors, and a lot people who came to look reconnected over them,” said Rechtman.

Now that the goats are gone, the Rechtmans both miss them. And they’re not the only ones.

“Everyday we get comments from people who miss them,” she said.

Asked if they would rent the goats again, the Rechtmans said they definitely would. The only thing they would do differently would be first to get written approval from the City of Dunwoody Department of Public Works.