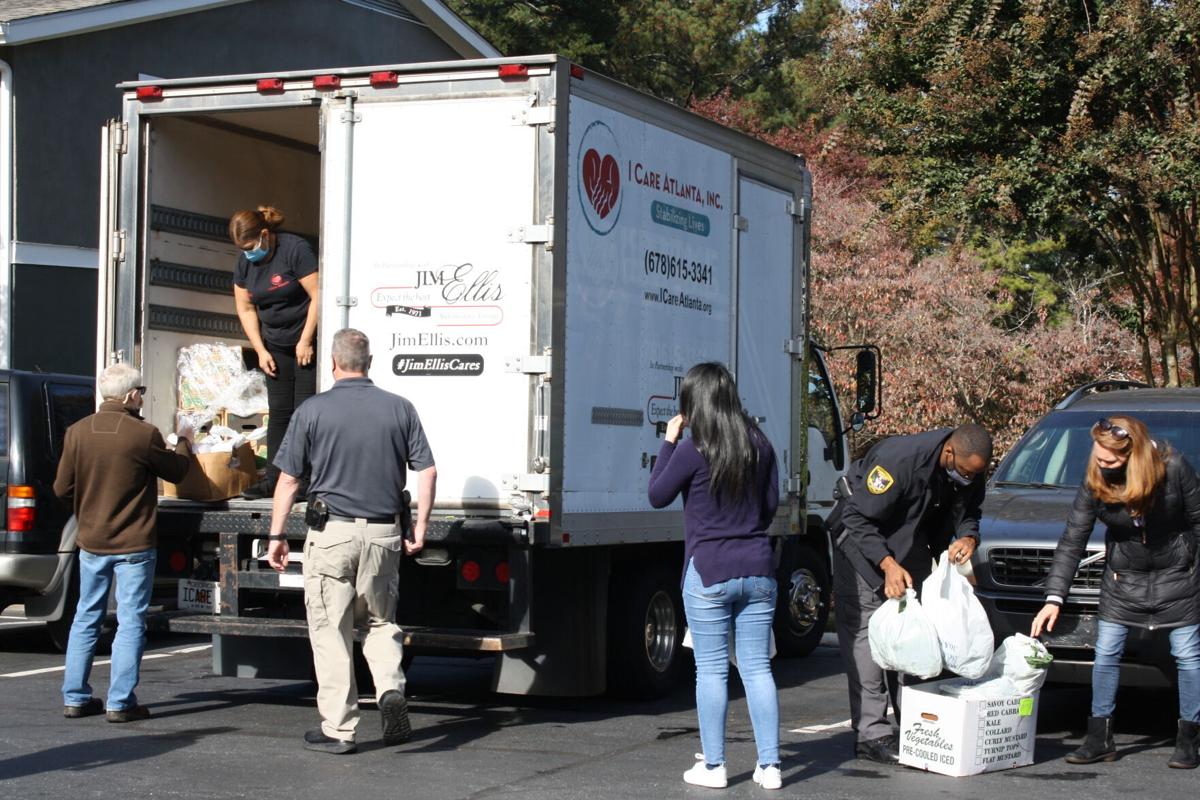 Staff and volunteers from I Care Atlanta join with Dunwoody Police to distribute turkeys, greens and other produce to needy families Nov. 20 ahead of the Thanksgiving holiday. 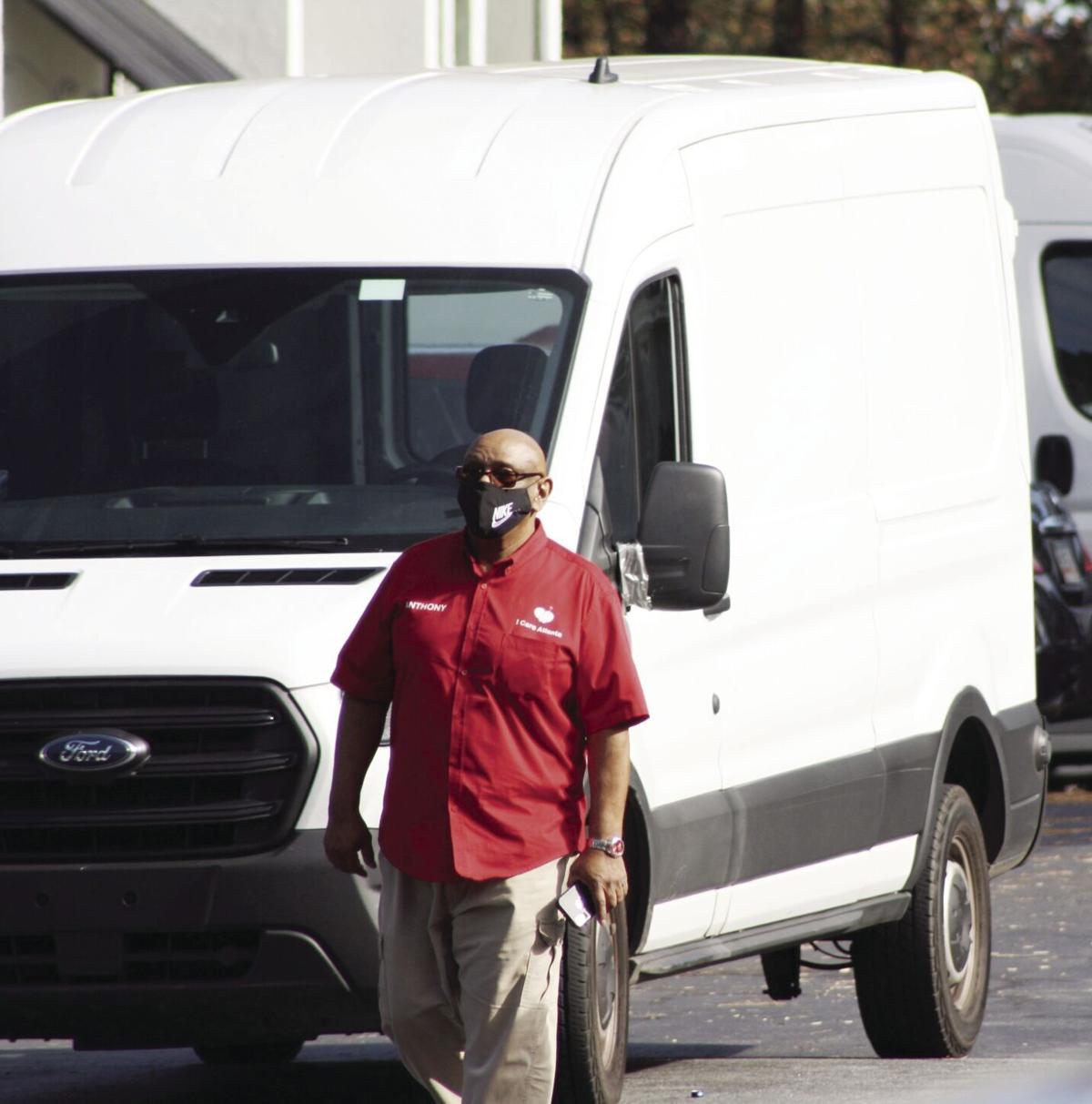 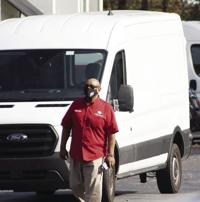 Anthony Delgado, who heads I Care Atlanta, helped coordinate efforts to distribute food to the needy in Dunwoody Nov. 20. The distribution included turkeys and other Thanksgiving Day staples.

Staff and volunteers from I Care Atlanta join with Dunwoody Police to distribute turkeys, greens and other produce to needy families Nov. 20 ahead of the Thanksgiving holiday.

Anthony Delgado, who heads I Care Atlanta, helped coordinate efforts to distribute food to the needy in Dunwoody Nov. 20. The distribution included turkeys and other Thanksgiving Day staples.

DUNWOODY, Ga. — Long-time Dunwoody resident Anthony Delgado has made it his life’s work to keep the area’s most vulnerable fed, clothed, and in high spirits. The needy are at the center of his consciousness because he knows the struggle first-hand.

For Delgado, the Doraville MARTA station marks the junction between two lives, one scarred by drug use, prison and homelessness; the other of salvation and giving.

“You can’t describe the feeling knowing that somebody’s going to go to sleep tonight with a full stomach of food, (have a) full stomach when they get up in the morning, and they’re going to be able to have some breakfast,” Delgado said. “It’s so rewarding.”

Delgado said the most memorable moment of his food service assistance was taking food to an elderly resident who had been eating cat food.

He headed south 23 years ago seeking refuge with a cousin living in Duluth. After an argument, he was kicked out and homeless. The odyssey began at the same train station, from which I Care Atlanta sits today.

The watershed moment came during the winter at the Greyhound station on Forsyth Street in downtown Atlanta, after being homeless for a year.

“This man and woman stood up in front of me, clapped their hands, and said young man go to the (Veteran Affairs) hospital, they’re going to help you,” Delgado said.

After leaving the bus station, he walked about a mile to Woodruff Park. Unable to shake a feeling to get to the VA, a man helped him get a train ticket and directions to the Decatur VA facility.

“By the time I stepped on to the train, the doors close, and I turn around (and) the man was gone. There’s no way he could have went up that long escalator that quick, but he vanished.”

Delgado believes that angels helped guide him that day.

The VA referred him to a treatment facility in Dunwoody, where he was required to obtain employment and go to church. Four years later, he lost his job and founded My Brother’s Keeper Reaching Out, INC. He started taking bread and pastries downtown in a 1984 Dodge Prospector van that had to be started with pliers and often jumped out of gear. My Brother’s Keeper was renamed to I Care Atlanta.

The Dunwoody Police Department has aided in food distribution to the city’s vulnerable residents. The connection started as the police department searched for non-profits to support at the city’s inception.

“Words cannot express the tireless compassion and dedication Anthony has demonstrated toward the Dunwoody community. He has brought smiling faces and tears of joy to hundreds of families,” Dunwoody Community Outreach Officer Anwar Sillah said.

I Care Atlanta has sponsored and hosted Dunwoody Police’s Christmas for Kids program, providing toys for hundreds of kids in need for 11 years. I Care Atlanta and area police departments partner to distribute meals to families in need several times a year.

City officials have joined with police to help pack food at the distribution facility and delivered to the community.

“Anthony is always there, he’s got food to assist people in need, clothes for people for interviews, he’s a well rounded individual who likes to help people,” Dunwoody Councilman John Heneghan said.

I Care Atlanta distributes food at 5879-B New Peachtree Road in Doraville every Monday, Tuesday, and Wednesday from 10 a.m. to 1:30 p.m. On Wednesdays, the refrigerated truck delivers food to Malachi’s Storehouse in Dunwoody.

More information is available about I Care Atlanta at the website http://www.icareatlanta.org/

Jeffrey reports on Dunwoody and the State Capital for Appen Media.

Why do some tumors track along nerves?

At a recent conference, an outstanding lecture by Dr. Scott Lester of the Mayo Clinic, Roche… Read more

Medicare is confusing: why and how to better understand it

Medicare has been in existence since 1965 (fun fact: President Harry Truman was the first Medicare beneficiary), and the Medicare system has been changed or updated multiple times since. This is partially the reason for the confusion to Medicare consumers. Read more

Sawnee EMC Ranks Nationally in ACSI Among All Utilities

An outstanding education, grounded in Christian faith and values

Mount Pisgah Christian School is a leading Preschool through 12th grade independent school located in the heart of North Fulton. Known for providing an outstanding college preparatory education grounded in Christian faith and values, 100% of students are accepted into a four-year college or university. Read more