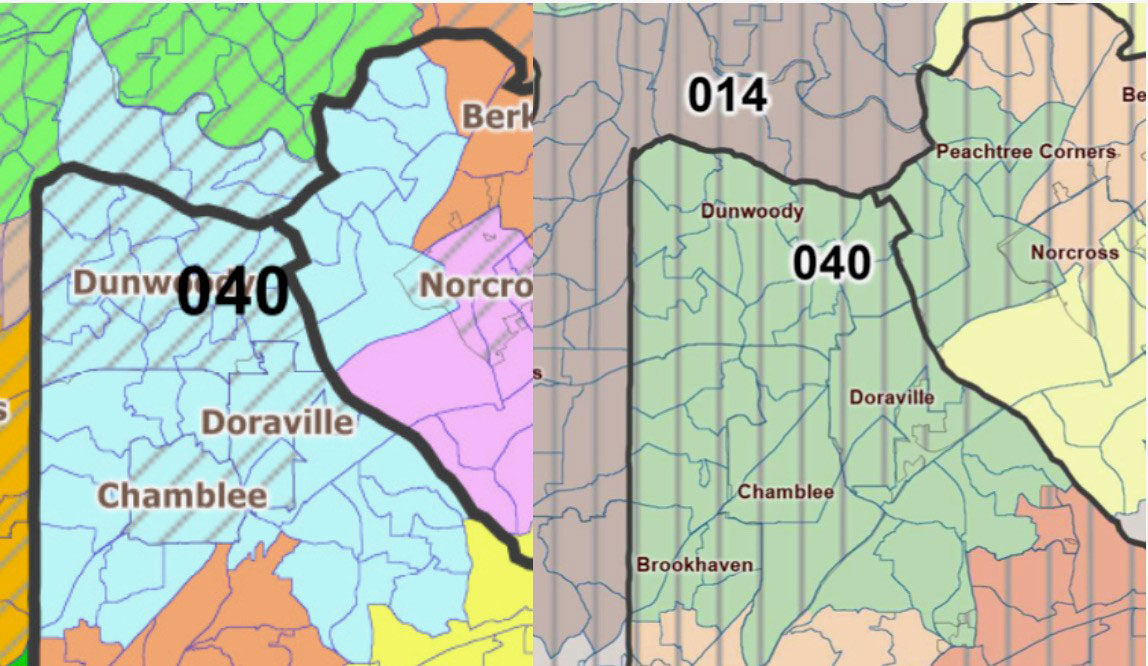 State House District 79, held by Rep. Michael Wilensky since 2018, will be renumbered to 80 and lose a portion of Dunwoody around Perimeter Mall. Portions of Chamblee and Doraville could be added if the legislation is signed by Gov. Brian Kemp.

State House District 79, held by Rep. Michael Wilensky since 2018, will be renumbered to 80 and lose a portion of Dunwoody around Perimeter Mall. Portions of Chamblee and Doraville could be added if the legislation is signed by Gov. Brian Kemp.

Dunwoody will see multiple changes if the bills are signed by the governor.

At the Congressional level, Dunwoody would move from the 6th District held by Rep. Lucy McBath (D-Marietta) to the 4th held by Rep. Hank Johnson (D-Decatur). The new 4th district would span from Dunwoody to Covington and remain a safe Democratic held seat. Johnson has held the seat since 2007 and has faced little Republican challenge.

The new 6th District includes all of Forsyth, Dawson and part of Cherokee Counties and is expected to return to Republican control.

McBath announced on Nov. 22 to seek election to the 7th District, which would encompass about half of Gwinnett County and Johns Creek under the new boundaries. The announcement creates an election bid between McBath and incumbent Democrat Rep. Carolyn Bourdeaux (D-Suwanee).

At the more local level, Georgia State House District 79 will be renumbered to 80 and include new areas of Doraville and the Huntley Hills neighborhood in Chamblee. The areas around Perimeter Mall and Ashford Dunwoody Road were removed and shifted to District 52.

State Rep. Michael Wilensky (D-Dunwoody) said it was sad that he no longer represented all of Dunwoody. He criticized the Republican redistricting proposals as gerrymandering, targeting two female legislators.

“It is alarming that in the redistricting (process), the two people who seem to be targeted are women of color, [U.S.] Rep. Lucy McBath and [State] Sen. Michelle Au,” Wilensky said.

Dunwoody will remain in Senate District 40 held by State Sen. Sally Harrell (D-Atlanta). The Fulton County portion of the district was sliced off along with adjustments to the Gwinnett County section. Additions were made near Brookhaven and Doraville.

The Republican-backed proposals seek to take back a lost Congressional seat and reshape districts in the metro Atlanta suburbs, where Democrats have made gains.

Opponents of the proposals argue that independent bipartisan commissions would be more effective at creating competitive districts and preventing litigation. Lawsuits are expected if Gov. Kemp signs the bills.

During the legislative session earlier this year, State Rep. Matthew Wilson (D-Brookhaven) introduced a resolution proposing a state constitutional amendment for redistricting to be completed by an independent bipartisan commission. The measure saw little movement.

“We have very effective state government when people are focused on the issues of everybody which are healthcare, education, transportation and criminal justice,” Wilensky said. “When we have focus on those things and not people who are solely focused on the extreme fringes of their base, we actually on the state level get more things done and get things done that are helpful to everybody.”