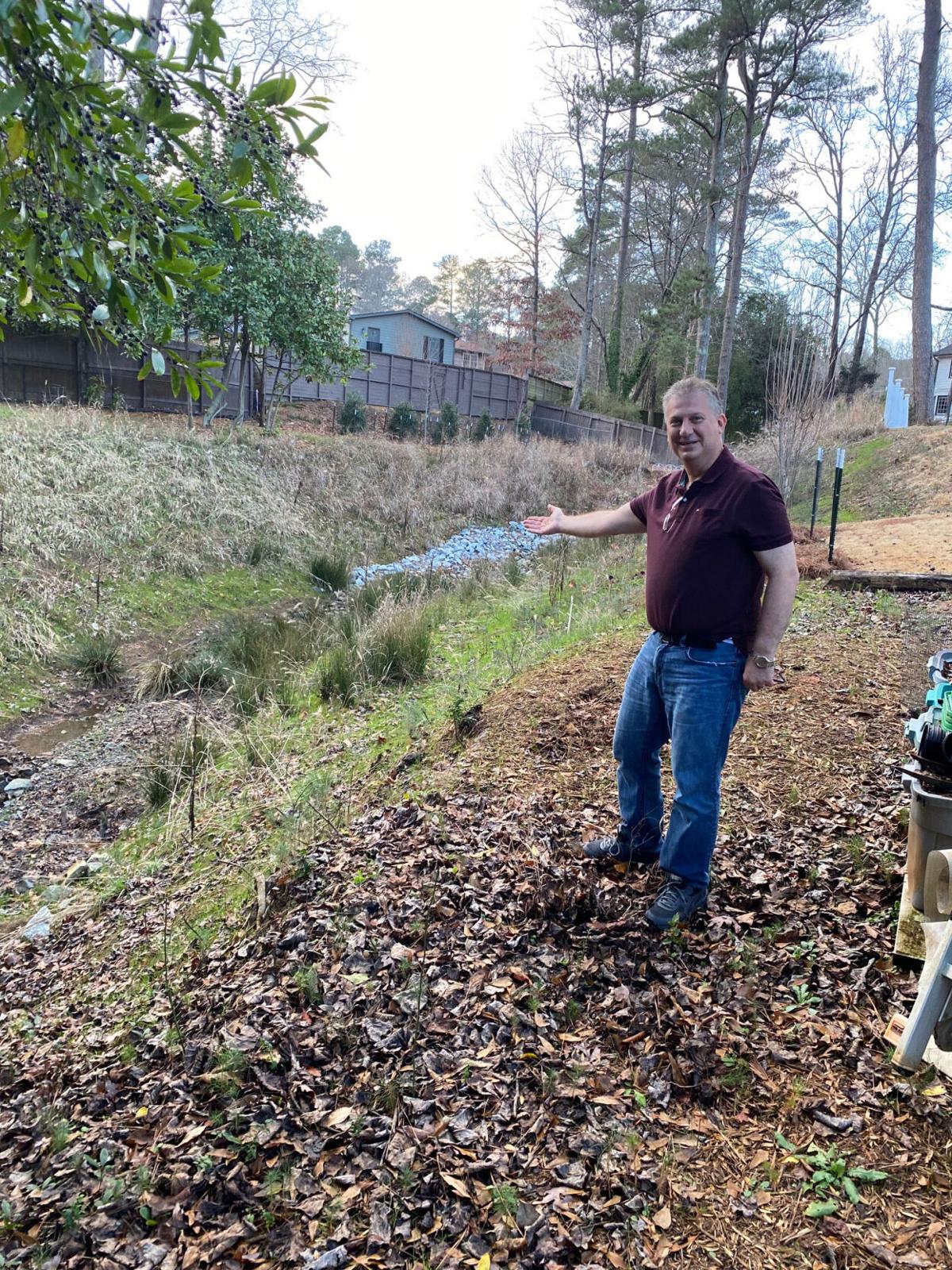 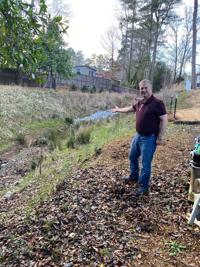 Owen Dwoskin, whose property abuts the Mill Glen Pond, points out erosion issues that the neighbors allege are a result of the city's installation of a stormwater drainage pipe. 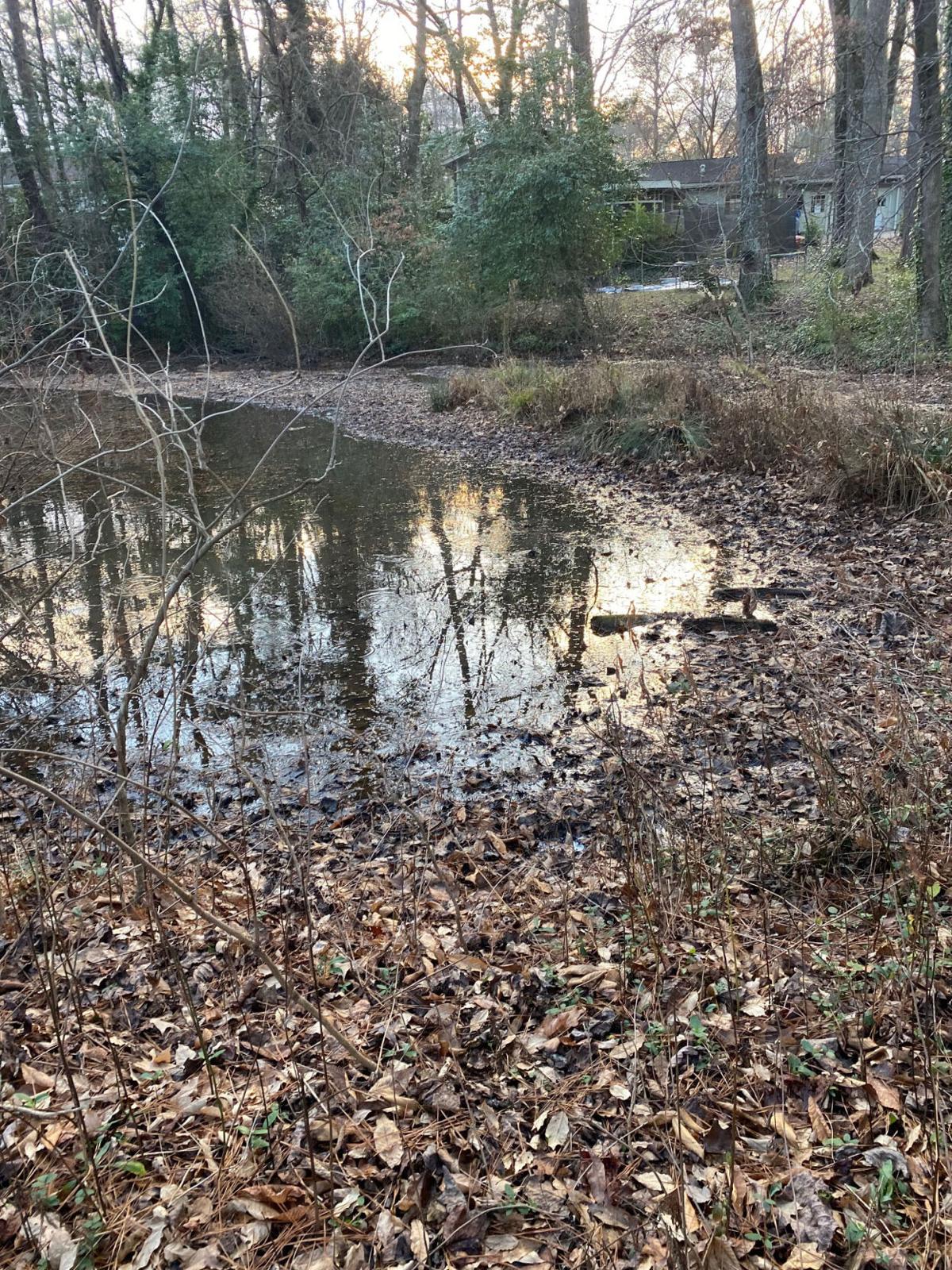 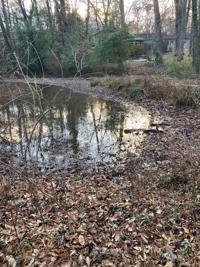 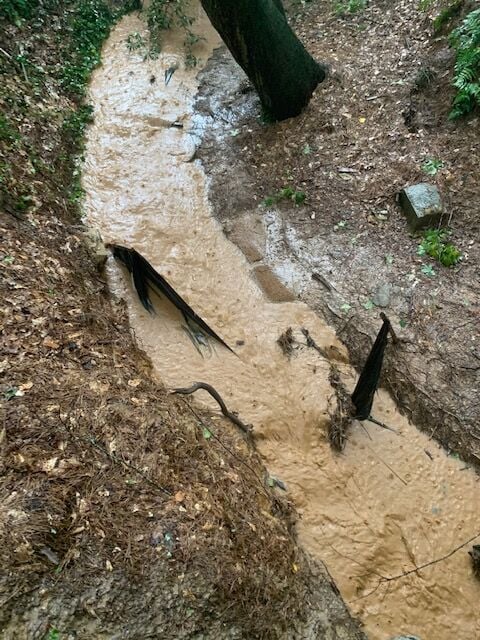 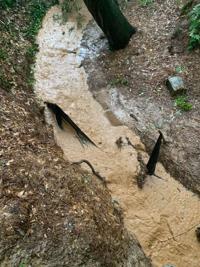 Seven homeowners in the Mill Glen subdivision have been trying to persuade Dunwoody’s stormwater management department to solve a decades-old problem involving sediment that has been flowing into their privately owned pond.

The neighbors say they are frustrated by what they say is the city’s lack of accountability, but Dunwoody officials claim they are “still reviewing the matter.”

The problem, according to the homeowners, began years ago but was accelerated in 2010 when the city installed a 24-inch stormwater line to help alleviate drainage and erosion problems and crumbling infrastructure in the area. The expanded access resulted in a greater influx of water reaching the pond, along with mud and sediment being deposited at the north end of the pond.

“With the erosion of the stream, continued sediment deposits from the surrounding city and county roads, and sediment deposits from new home construction over the years, resulted in soiled water draining into the pond,” an email sent to city officials May 2020 by Mill Glen resident Joan and Owen Dwoskin said. “We now have a ‘dead’ pond because the mouth of the pond has been blocked by a new ‘island’ of sediment. The volume of sediment is so high that vegetation is growing tall on the ‘island,’ eliminating any possibility that the spring that used to feed the pond fresh water will function as nature intended.”

Neighbors say the city has tried to remediate the problem. An email sent in May 2020 by Carl Thomas, the city’s stormwater utility manager, outlined plans for the streambank stabilization plan, which included the installation of silt fences, mulch and temporary seeding.

“The plan will also use a bypass pump to divert the intermittent stream around the construction site. This eliminates the primary water source that could carry any sediment downstream,” Thomas said in his email.

However, the residents said these efforts did little to stop the flow of sediment into the pond. An email from Joannie Dwoskin to the council last August repeated the request for the city to address the problem, saying that the promises made by Thomas and his department were broken, and detailing how the issue has escalated.

“When I complained repeatedly during the construction process that the sediment was flowing freely and repeatedly into the pond, I was referred to the city attorney. Needless to say, that was surprising and upsetting,” she said. “The city attorney then sent my correspondence to the city’s insurance company.”

The homeowners retained a lawyer Nov. 25, 2020 when it became evident to them that the impasse would not be resolved.

The Dwoskins said their attorney received a message March 26, 2021 from attorney Amy Cowen of Freeman Mathis & Gary, who said she represented the city through its insurance carrier. The message said that the city is not responsible for any damages caused by the installation of the stormwater drainage system.

The email, obtained by the Crier, said “the evidence is clear that the City has not caused any increase in the sediment load to Mill Glen Pond sufficient to support a claim for damages under Georgia law. Additionally, the owners of Mill Glen Pond have failed to mitigate any purported damage by failing to dredge or otherwise properly maintain the pond.”

The neighbors say that they remain confused and upset about what they label the city’s lack of accountability.

“They destroyed it and they won’t acknowledge it, and they refused to talk to us,” said Paul Matia, whose Bend Creek Road property backs up to the creek. “The changes they have made are not helping at all.”

City officials would not discuss the Mill Glen Pond issue specifically, saying, through a spokesperson, that the city is “currently reviewing the matter.”

The homeowners acknowledge that the job of clearing the pond isn’t entirely the city’s responsibility but say solving the underlying issues involving the drainage is the first step to a permanent solution. They say remediation could cost upwards of $200,000, according to an estimate provided to them by McEachern Dredging.

“It does us no good to clear the pond if it’s just going to fill up again with sediment,” Owen Dwoskin said. “We just want them to talk to us, acknowledge what they did was wrong and work with us to fix it.”