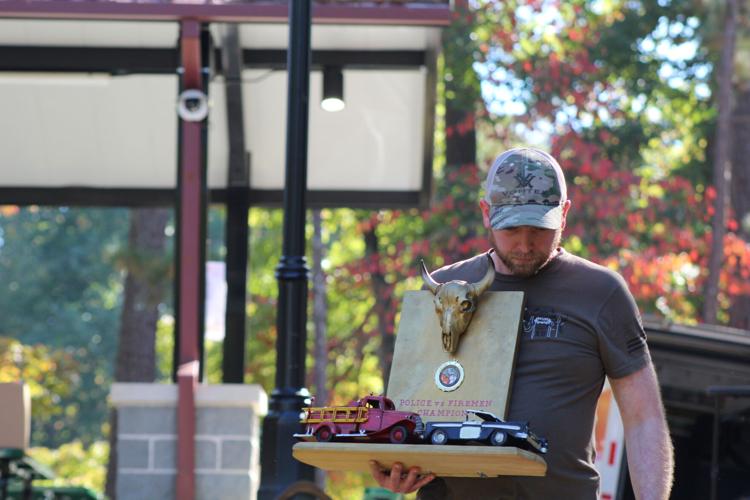 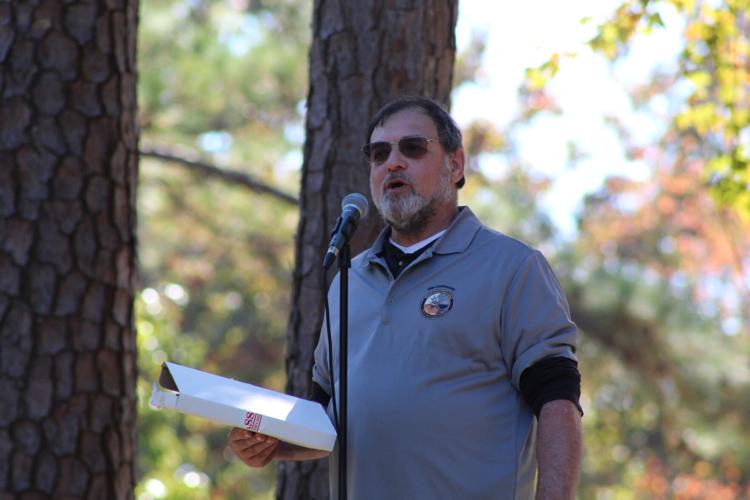 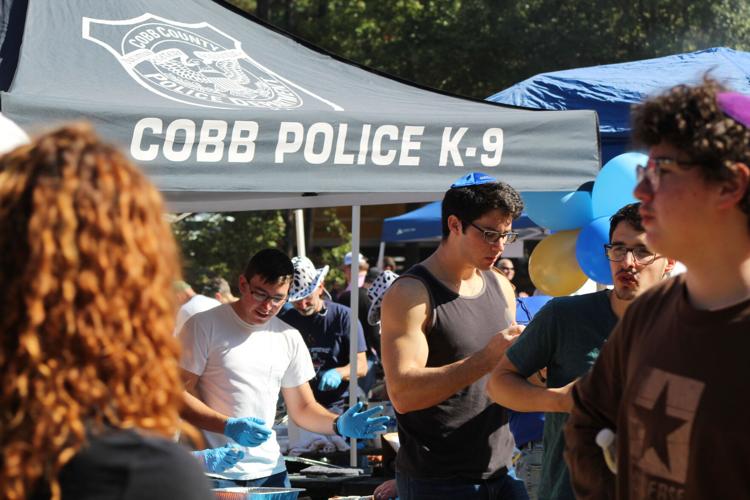 Representatives of the Cobb County Police Department K-9 Unit, also known as Blue Crew BBQ, prepare food for visitors at the Atlanta Kosher BBQ Festival Oct. 23 in Dunwoody. While the festival honors first responders every year, offering free entry and a special trophy to those who participate, a portion of the festival proceeds was donated to the families of two Cobb County deputies who died in the line of duty in September. Blue Crew BBQ won first place in Chili as well as the Police vs Firemen Champion Award, taking it from the DeKalb County Fire and Rescue Department. 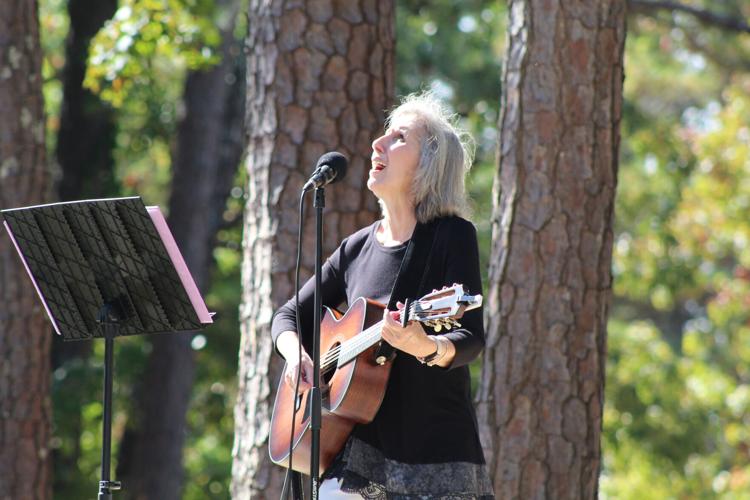 Paula Krone looks up to the sky while singing and playing guitar. Krone played covers and some original music, most of which was interpretations of different Jewish prayers. 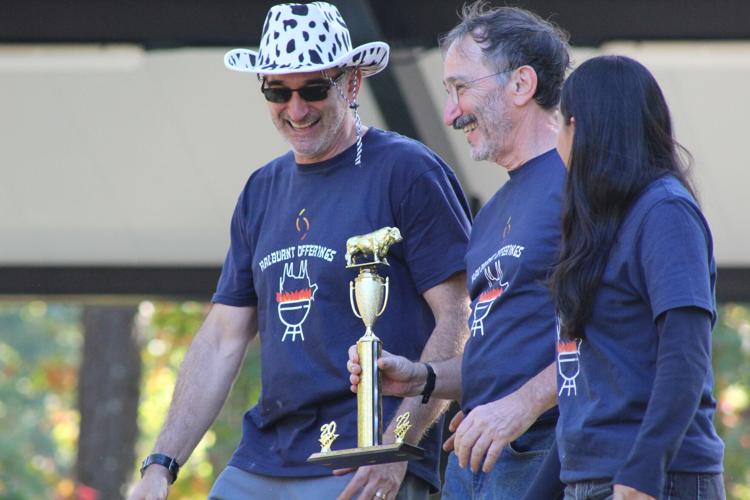 Members of Halburnt Offerings walk off with one of two first-place trophies at the Oct. 23 barbecue festival. The team traveled from Washington, D.C., and won first place in both Brisket and Chicken. 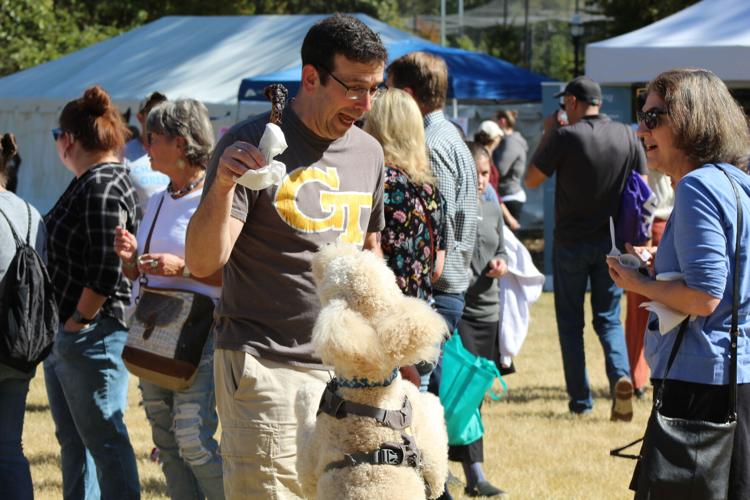 A dog jumps up on its owner to steal his barbecue beef rib at the 10th Atlanta Kosher BBQ Festival Oct. 23 in Dunwoody. Hosted by the Hebrew Order of David, the barbecue competition drew around 4,000 visitors to taste Kosher chili, chicken, ribs and brisket from more than 20 teams.

Paula Krone looks up to the sky while singing and playing guitar. Krone played covers and some original music, most of which was interpretations of different Jewish prayers.

DUNWOODY, Ga. — While pork may be the most widely used meat for barbecue, the Atlanta Kosher BBQ Festival does it differently.

The Hebrew Order of David welcomed more than 20 in- and out-of-state teams to its annual barbecue competition Oct. 23, creating the savory-smelling smoke wafting over Brook Run Park. The festival, now in its 10th year, drew a crowd of around 4,000 hungry visitors.

Many could be seen enjoying the teams’ pit-mastery, throwing back 1 oz. cups of Kosher barbecue and messily gnawing on the last bits of beef rib — one of four food groups in the competition. Teams also vied for first place in Chili, Chicken and Brisket, among other awards.

Because the Hebrew Order of David abides by the highest level of Kashruth, the festival allows the entire Jewish community to participate, said Jody Pollack, the festival’s executive director and HOD member. Everyone else comes along because barbecue in the South is common, he said.

“Our unofficial motto is, ‘We don’t care what flavor you are, as long as you like barbecue,” Pollack said.

Several live music performances were stationed atop a hill by the park pavilion.

Paula Krone sang and played acoustic guitar to covers and some original songs. Many were interpretations of Jewish prayers, like Hashkiveinu, a prayer that seeks comfort and protection.

Nick and the Grooves followed Krone, a four-piece band that stuck to the blues. Lead singer and guitarist Nick Edelstein asked the crowd to repeat after him, “No pork on the fork,” which is also the title to a documentary that offers a behind-the-scenes look into the Atlanta Kosher BBQ Festival.

Not only was there no pork, but everything at the competition was koshered. To keep everything kosher, Pollack said organizers supply most of everything to the competitors — the grills, the utensils, the spices and the tomato sauce for sauces. But teams are allowed to bring their own charcoal and flavored wood.

Pollack explained the methodical and intentional process of koshering as well as its significance to the Jewish community.

The Atlanta Kashruth Commission oversees festival proceedings. Pollack said rabbis monitor the teams when they receive the meat, to ensure that the chain of custody isn’t broken. To maintain Kashruth, the rabbi is also the only person who can light the grill, which is done the night before the festival.

The meat is cooked as usual, but, because of the koshering process, the meat is already heavily salted before the teams get to it. Pollack said teams must understand that they need only use around 10 percent of the salt they normally would.

For prep, the kitchen is koshered, which involves specific techniques. Then, everyone preps the meat together. It is then sealed, wrapped in plastic and signed by the rabbi.

Kosher eating is a tenet of the Bible, Pollack said. And part of that canon calls for separating dairy and meat. Don’t look for a cheeseburger at the event. Macaroni and cheese was provided, but it used imitation cheese.

“It's critical that meat and dairy be completely separate,” he said. “You cannot bring a coffee with milk and sugar in it on the site.”

“It’s hard to go into a restaurant because you don’t know what anything is cooked in,” Allen said. “Here, you’re going to get what’s clean and safe to eat.”

“It's an event we can come to, and we don't have to question,” Oaks said. “We can go get a hot dog. Every other outdoor event — they're normally going to be, you know, not kosher hot dogs.”

First responders at the front

The festival traditionally honors first responders, who are given free entry to compete in the general competition but who also have a chance to earn the First Responder’s Cup. The Cobb County Police Department K-9 Unit took the traveling trophy from their fellow competitors, the DeKalb County Fire and Rescue Department.

“We want to give our thanks to the first responders for all they do for us and to give the community the opportunity to meet them as people without their uniforms on,” Pollack said. “It's something that we feel is very important, and we want them to know that they're appreciated.”

This year was an exceptional one for Cobb County Police members. The department lost two deputies in the line of duty in September. Festival organizers donated some of the event proceeds to honor their memories and families left behind.

Lester Maddox, retired CCPD K-9 lieutenant and team lead of Blue Crew BBQ, said the department has participated in the competition for at least seven years. Maddox described how canines help bridge the gap between the Police Department and the community and how the festival was another way to do the same.

“It's been a lot of fun going down and interacting with people to get to know different groups, doing different things.”