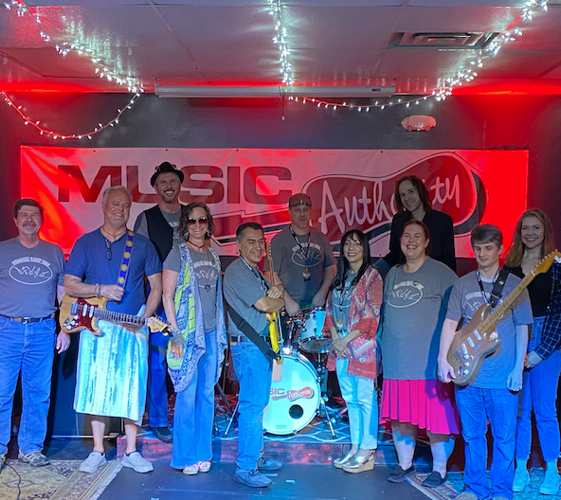 You can still Rock in America!Camp is not just for kids at Music Authority

ATLANTA (June 1, 2022) – Do you sometimes get that nagging feeling, wondering what would have happened if you had stayed in the band? Do you dream of the rock star career that could have been? Do you catch yourself playing air guitar, singing a little too loud to your favorite songs, or rocking out with a drum solo in the car while at stoplights? Are you a little bit jealous dropping your kids off to summer camp while you’re headed for work again? Adult rock camp might be just the thing you’re looking for.

Meet Mary Sikes. Mary had taken voice lessons with Music Authority for four years. She was very active in her church choir and really wanted to “up her game” where singing was concerned. She was very shy and used to singing background vocals as part of a group. Her daughter had participated in three or four rock camps with Music Authority before graduating from high school in 2020. And that was the year Mary received the challenge to sign up for the adult rock camp.

Music Authority’s Adult Rock Camp is for adults of all skill levels and ages (18 and up). The camp starts the first Saturday in June (which is June 4 this year) and runs each Saturday throughout the month. At the end of the camp, bands perform a concert in front of an audience at Music Authority’s live venue, the Back Room.

I would tell anyone that is on the fence – look you’re an adult, you’ve always wanted to be a rockstar, now is your chance and you’ll have a lot of fun doing it.

So, Mary said to herself, “We’re doing an adult rock camp, okay!” Knowing that she had extreme stage fright, she thought standing up there on stage would really freak her out. She knew she would have to force herself to get out in front of people and sing, despite the anxiety she felt. She found encouragement in band members and instructors to keep on going no matter what.

“Even if I mess up, the band will back me up,” Mary said. “This great environment gets you out of your own head so you’re not self-conscious about things. It gives you permission to makes mistakes because everyone makes mistakes.”

Mary learned so much through the program. When she started during the summer of 2020, Andrew Loggins was her instructor. She loved it so much that she signed up again in 2021 and plans to return this summer for the third year in a row.

“The whole point of rock camp is when a group of people play together, everyone must work together. It’s a lesson in collaboration,” Mary explained.

Mary said that the camp taught her more than just how to perform on stage. It taught her how to make sure she comes in on time, how many measures come between interludes, how to map the music so they don’t sing over each other, and how to adjust to each person’s skill levels.

“This environment allowed me to be a better choir member at church. I now carry the soprano part by myself, which is something I could not have done before Music Authority’s summer camps,” Mary explained. “I am singing nine songs and I am not that worried about it, and this feeling is new for me.”

Music has always been something that Mary loved, and a reminder of good times in her life. Now, she’s much more confident with her singing, and knows she can move from the background choir to being a soloist with confidence.

Since most of the adults in camp have jobs, they come together for 2 ½ hours for practice. They spend their time together productively, working on the songs, splitting up the parts, and rehearsing. Then, they put together a fun concert at the end.

“Tell anyone that is on the fence – look you’re an adult, you’ve always wanted to be a rockstar, now is your chance and you’ll have a lot of fun doing it,” Mary said.

“It’s one of those times that you can tell instructors what your limitation is, and they work with you to make you better, and the collaboration makes you better. You have LOTS of resources to help you in that room, and you will learn something along the way,” Mary explained. “They work with you where you are.”

Max Finkelstein had played drums since 1988.  He jammed with a few people here and there and was in couple of bands rehearsing in warehouses, but never really “played out.” He moved from acoustic drums to a Roland electronic kit to keep the noise down in a condo. Even though he was nervous about it, he was excited when Natalie, his wife, signed him up for rock camp as a Father’s Day gift.

“I came to Rock Camp with experience playing in a band.  It felt GREAT to get together with other musicians and rehearse. I was a little nervous at first, but Andrew got me out of that funk.  A few of us wanted to continue to jam together and now have a “basement” band. Now every Father’s Day is enrollment to Rock Camp and of course the “basement” band members are all excited to enroll as well,” says Max.

“The Rock Camp experience gave me confidence to play more. Another cover band reached out to me looking for a drummer and now I play in a second band that will eventually play out soon,” says Max.

At the last concert, he performed four songs, including Stevie Nicks’ Edge of 17 and What I Like About You.  This year, he’s ready to rock out to more classic songs and continue the tradition!

·         Should have some prior knowledge of instrument or singing