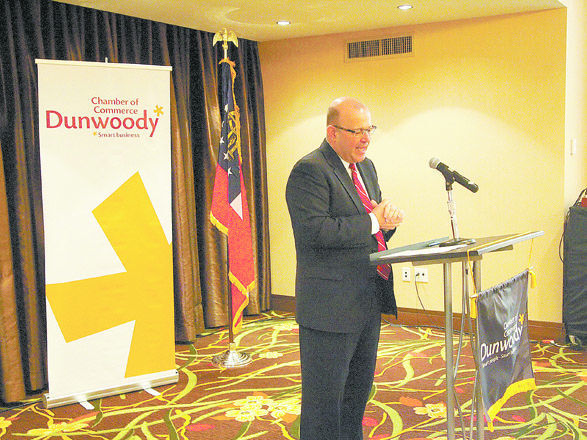 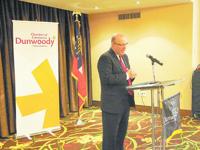 By now, we all know that the big hole in the ground at the intersection of Hammond Drive and Perimeter Center Parkway is part of State Farm’s national reorganization into three multifunctional hubs – a 17-acre campus that will eventually employ 8,000 people in 2.2 million square feet of office space, with an additional 100,000 square feet of retail, restaurant and entertainment space and a 175-room hotel. It’s the largest such project in Atlanta history, according to Alex Chambers of KDC, the project developer.

On Oct. 30, the Dunwoody Chamber of Commerce held a luncheon to celebrate the development. The keynote speaker, State Farm Vice Chairman and Chief Operating Officer Michael Tipsord, explained why his company chose Dunwoody and the relationship he envisions in the years to come.

Speaking to a sold-out audience, Tipsord several times remarked that the enthusiastic reception he had received from the local business community had reinforced State Farm’s decision to consolidate a third of its business here.

With 5,700 employees already in Atlanta, many of them at various locations in Perimeter Center, Dunwoody was a logical place to look. But it was the location amenities and logistics that sealed the deal.

“We believe in live-work-play,” Tipsord said. “It will help us compete for talent.”

Dunwoody’s location at the intersection of I-285 and Georgia 400, its MARTA station and its growing walkability made it a natural. As Atlanta’s largest office market, home to most of the region’s Fortune 500 headquarters, the central Perimeter offers a vibrant environment that State Farm believes will appeal to employees, especially Millennials, who prefer the live-work-play lifestyle.

One advantage of the new site is its proximity to the Dunwoody MARTA station, which will provide a covered walkway into the State Farm main lobby.

“Companies are realizing that attaching to MARTA is a good thing,” said Dunwoody Mayor Mike Davis. “With our connectivity and access to major transportation, affordable executive housing and the high quality of life amenities – namely, the perfect mix of restaurants, hotels and shopping – live-work-play is already here in Dunwoody.”

“They specifically said they didn’t want any,” said Starling, “because they have a policy of never pitting one community against another.”

This position is reflective of State Farm’s vision for its relationship to the local community.

“We’re not just a supplier of jobs,” said Tipsord. “We’re a community participant that promotes from within. That’s our culture.”

Besides already being a major Atlanta employer, State Farm has so far given $10 million to more than 100 non-profit organizations in Atlanta mainly in support of safety and education.

In fact, education was at least one influencing factor in State Farm’s decision to establish a hub in Dunwoody.

With its history of support for education, Tipsord also said State Farm is already forging a relationship with Georgia Tech.

“We engage educators, not just checkbook investors,” said Tipsord. “We need employees who can learn.”

As a new member of the Dunwoody Chamber, State Farm will have opportunities to affect education in Dunwoody through the Chamber’s Education Initiative.

”I’m especially excited about having such a significant Chamber member as another partner for our education program,” said current Board Chair Paula Owens.

State Farm’s membership in the Chamber will have other positive effects too.

“To have a member like State Farm will allow the Chamber to better understand the needs of larger employers, property owners and tenants in the City,” said incoming Chamber Board Chair Brent Morris.

“State Farm has a strong history of being good neighbors, which makes its investment in the Dunwoody community and more specifically the Chamber very exciting,” said Chamber President and CEO Stephanie Snodgrass. “The company’s interest in the community as a whole is energizing and is helping to showcase why Dunwoody is a great place to do business.”

At the end of his remarks, Tipsord summed up his expectations for Dunwoody.

“I have no doubt we’re going to have a great partnership with this community,” he said. “We’re so excited about what the future holds for us in Dunwoody. You earned it. You created the environment.”

Carol Niemi is an award-winning creative director who works with growing companies to define and build their brand. Reach her at carol@carolsniemi.com.