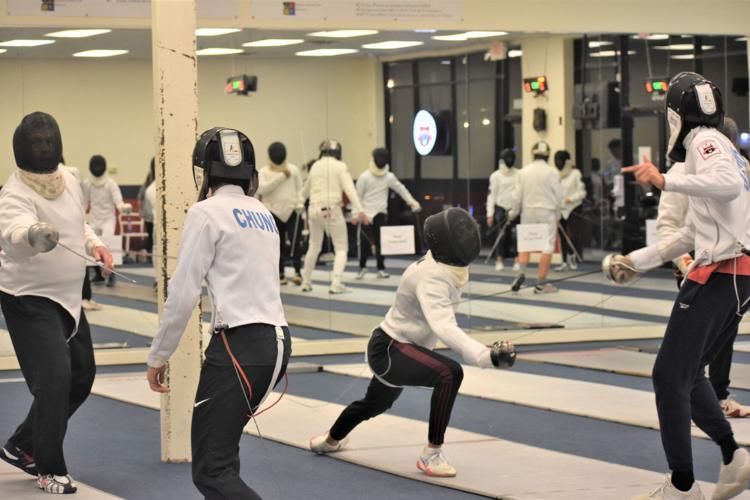 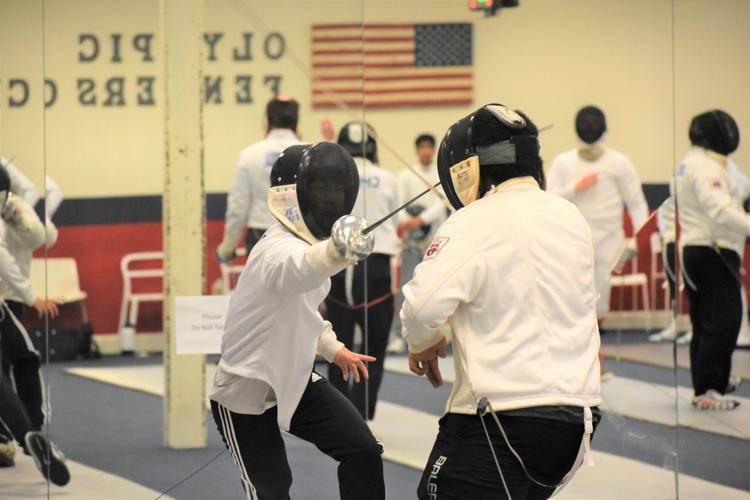 The teen and adults class practice Aug. 17 at Olympic Fencers Club on Medlock Bridge Road in Johns Creek. The facility opened in 2010 and has been ranked the No. 1 club in the U.S. Fencing: Georgia Division for seven consecutive years. It has approximately 220 students. 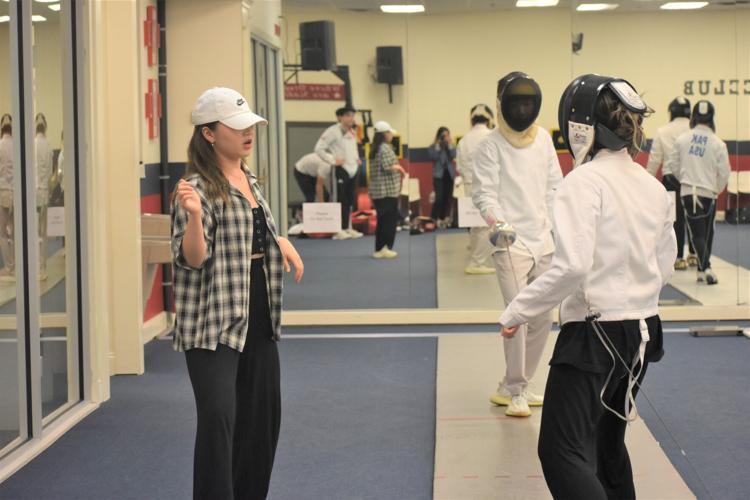 JOHNS CREEK, Ga. — The students at Olympic Fencers Club say what keeps them practicing the sport is the fun community around them.

But, working with Olympians and winning regional and national championships helps too.

Fencing is a sport derived from dueling, played by two opponents on a strip or ‘piste’ 2 meters by 12 meters long. The goal is to score ‘hits’ or ‘touches’ on an opponent. The first player to score a given number of hits – usually between five and 15 – wins the bout. The three disciplines in modern fencing are foil, épée and sabre.

In 2010, coaches Henry Jung and Annie Lee opened Olympic Fencers Club on Medlock Bridge Road in Johns Creek after moving to the U.S. from Korea five years earlier. Since then, it has been ranked the No. 1 club in the U.S. Fencing: Georgia Division for seven consecutive years. It has approximately 220 students.

Back in Korea, Jung and Annie met while competing on teams at the Korean National Sports University. Jung was a swimmer and Annie a fencer. Annie’s father, Kun Bae Lee, was a professor at the school and served as the head coach for the Korean national fencing team for 15 years. He has received numerous awards over the years for his critical role in the development of Korean style fencing.

In fact, Korea has grown into a fencing powerhouse, having won five gold medals, three silver and eight bronze in Olympic fencing. It is tied with China as the Asian country with the most gold medals. Kung Bae and Korean Olympic fencers visit Olympic Fencers Club throughout the year to work with the students, which they say is an invaluable experience.

While Jung didn’t start out as a fencer, he said he learned from his father-in-law. In 2013, when he began teaching, he honed his skills by practicing with his students. Jung and Annie have coached at Lambert, South Forsyth and Peachtree Ridge high schools and continue to coach at Mill Creek, Denmark and Alpharetta high schools.

Jung said there are two high school leagues in Georgia, with the Georgia High School Fencing League the most popular in Fulton County and Onguard High School Fencing League taking precedence in Gwinnett County. Many of the students who take up the sport at Olympic Fencers Club are high schoolers who are looking for one more thing to add to their resume before applying to college.

Some of them have gone on to be recruited to fence at Princeton, Penn State and the U.S. Air Force Academy. Jung said he and Annie have taught other disciplines, but now they mainly focus on épée, because it is the easiest for volunteers to referee, and it is what’s mostly offered at the local high schools.

“I’m a sportsman,” Jung said. “I love this sport. Before I started fencing, I loved to swim and ski, but fencing is totally different. Swimming is just to try to break my own record. I’m fighting with myself. With fencing, I need a partner and every single opponent is different, so I need a new plan. It’s like chess. We need to focus more than 100 percent, and that is very tiring, but it’s a good feeling.”

Nicole Moon, a junior at Lambert High School, started fencing in middle school, because she saw the sport on a TV show, and it captured her interest. This year, she is co-captain of her school’s team. However, she said last year was the first time both the women’s and men’s teams at Lambert High won gold, which was a huge accomplishment. She said she owes it all to her coaches, Jung and Annie.

“We’ve had so many new members of all different ages and interests join since I started, and it’s really interesting to see them all come together in this one club because we are like a family,” Moon said. “We all support each other.”

Jeannie Lee, a senior in college, started fencing when she was in high school and competed in the Junior Olympics. She said she had to stop fencing competitively because her school doesn’t offer NCAA Division 1 fencing, but she still practices at Olympic Fencers Club.

“Fencing is a huge part of me now, because I have done it for a long time and it’s super fun,” Jeannie said. “Being in fencing energizes me, gives me motivation and allows me to just keep pushing myself. It all depends on what you want to get out of it. The coaches here will match your needs 100 percent whether you’re a beginner wanting to have fun and exercise or looking to compete.”

At 69 years old, Dave Aton also takes classes at the facility. He said he was first introduced to the sport as a student at Emory University. Then, in the early 2000s his son started fencing at Alpharetta High School, so he figured he should start doing it again because he was already driving him to practice.

Aton said he loves that fencing is one of the few sports that parents can do with their kids. He said another thing he enjoys is that they can be within 6 to 8 feet of “all the action” at tournaments. Plus, he said, it’s a great form of exercise.

“During the early part of the pandemic, when the club was closed, I was just sitting at home, not getting the same kind of exercise, and I could feel my body slowing down,” Aton said. “I felt five years older. Finally, after almost a year, when I started fencing again, it took four months of fencing, but I got back up to feeling normal.”

Jung said the club closed for about three months in 2020. Until a year ago, not all of their original fencers had come back, but since November of last year, new students have continued to sign up. Jeannie added that she thinks fencing is one of the most “COVID-friendly” sports, because students wear a mask over their head and are forced to keep a distance between them and their opponent.

“So, while other sports require close contact and you might be scared of doing the sport during the pandemic, I think fencing provides such a good alternative for exercise, and it’s a very clean environment that we keep here,” Jeannie said.

Olympic Fencers Club offers a free beginner class every Friday for all ages, starting at 5 years old. After that, students can join either the beginners class, kids class, or teen and adult class. Rates range from $150 a month for one class a week to $220 a month for unlimited classes, plus a one-time registration fee of $49. Equipment is available to rent.

For more information or to sign up, visit olympicfencersclub.com. 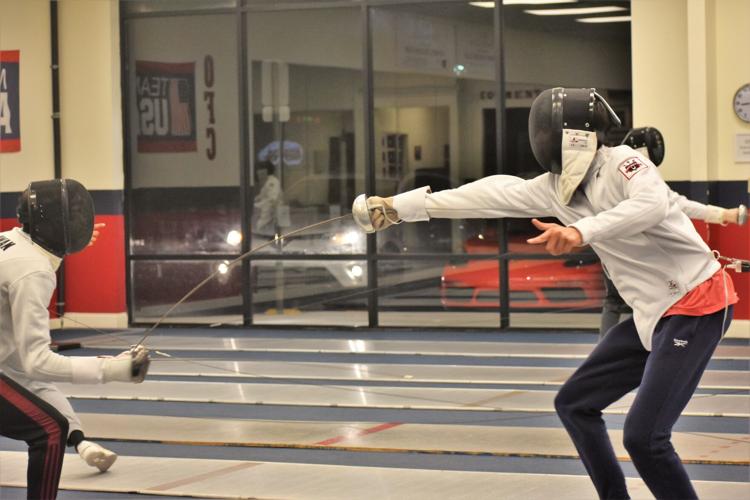 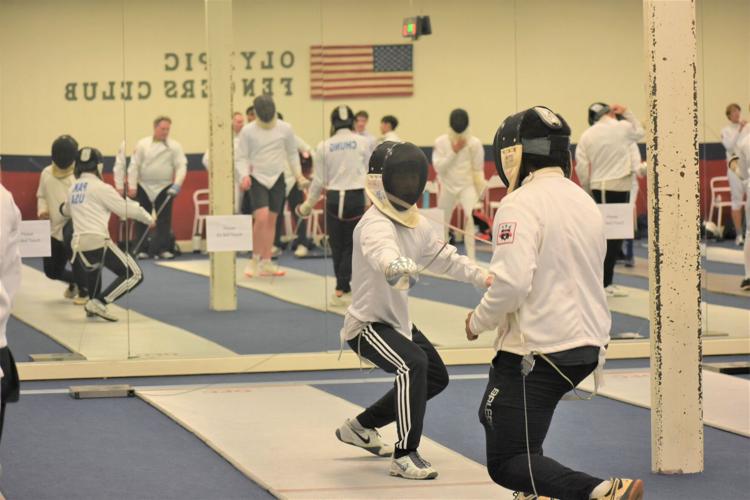 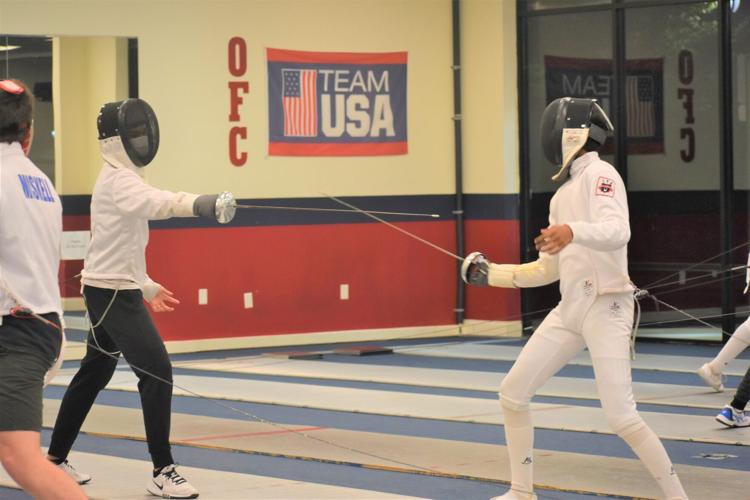 Olympic Fencers Club on Medlock Bridge Road in Johns Creek opened in 2010 and has been the No. 1 club in the U.S. Fencing: Georgia Division for seven consecutive years. It has approximately 220 students.