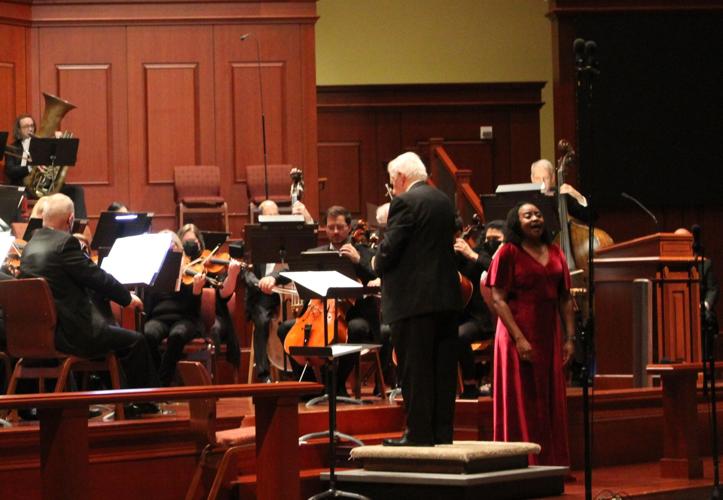 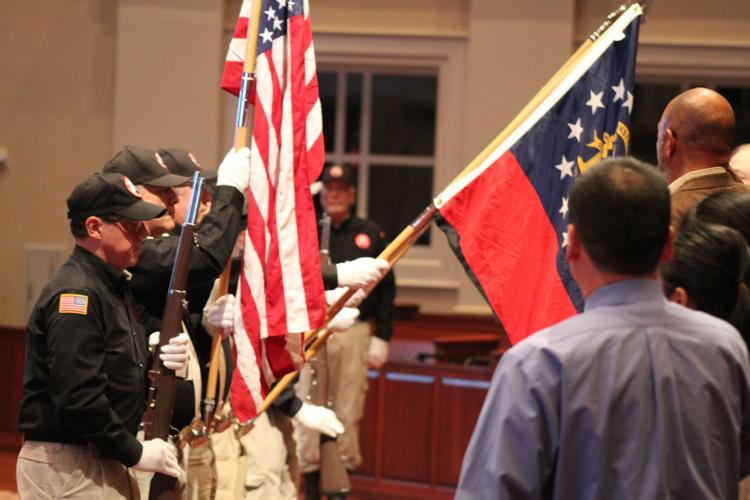 For “A Veterans Day Salute,” nearly 80 professional musicians under the direction of J. Wayne Baughman, played an assortment of patriotic songs in the Johns Creek Methodist Church sanctuary, beginning with the national anthem.

Morton Gould’s “American Salute” is a personal favorite for Baughman, who has been the JCSO conductor since the organization’s founding. Following the performance, sitting in the first pew with a water bottle in hand, he described how the piece increases tempo at the end and the exciting moment when its familiar tune returns.

United States Air Force Tech. Sgt. Stacey Holliday enriched the Saturday night performance as a vocal soloist. Holliday, whose career in the Air Force began in 2016, is a member of the Singing Sergeants, the official chorus of the military branch.

Wearing a long red velvet dress, Holliday periodically stood beside Baughman throughout “A Veterans Day Salute,” layering a few of the musical arrangements with her alto range.

While musicians only had one 3-hour rehearsal before the big night — surprising considering the smoothness of play — planning for the concert took around a year and half from start to finish.

Preceding the music, veteran Roger Wise of the U.S. Army Medical Corps introduced the Johns Creek Veterans Association Color Guard, whose members performed a presentation of colors, and led the audience in the Pledge of Allegiance.

Wise, who was inducted into the Georgia Military Veterans Hall of Fame in 2019, said the JCVA is one of the largest veteran associations in the country.

Near the end of the orchestra’s performance, co-presenter Michelle Hanchey recognized veterans in the crowd of around 250 people by military branch. After stating the branch’s founding date, individuals who served in the U.S. Army, Navy, Marine Corps, Coast Guard and Air Force stood to the applause of others in the crowd.

Linda Brill, JSCO executive director and lifelong clarinet player, said it was important for the orchestra to honor veterans, alluding to the vast number of veterans in North Georgia. According to the U.S. Census Bureau, there are more than 42,000 veterans in Fulton County.

“It’s only appropriate for the sacrifices that they made,” Brill said.