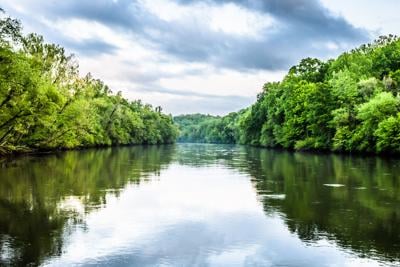 ROSWELL, Ga.  — The Chattahoochee Riverkeeper is working with a team from the University of Georgia to expand water testing efforts to monitor cyanobacteria toxins, following the death of a dog after he swam in the river in January.

Susan Warner and her husband took their dog, Chewy, on a hike at Gold Branch trail along the Chattahoochee the weekend of Jan. 23. Halfway through the 2.5-mile hike, Chewy played around in some stagnant water, not fully submerged, for a couple of minutes and came out muddy.

As the couple and the dog made their way back to the car, Chewy began to show signs of fatigue and was panting and coughing.

“As we were going through there, he just started getting tired and so he kept sitting down and we’re like, wow, is he just really out of shape, what’s going on?” Warner said.

By the end of the hike, Chewy became more lethargic and stopped walking. Warner’s husband had to back the car up to the trail and carry the 90-pound dog into the car.

Chewy continued coughing and panting throughout the night and had trouble breathing in the morning. Warner took him to an emergency veterinary clinic where he died on Jan. 24.

“After that, it was just shocking to me because my dog did not have health issues so for him to go from like, 24 hours earlier he was bouncing around, like happy, normal, and now all of sudden he’s dead,” Warner said. “It was shocking and super scary.”

No certain cause of death

The veterinarian found the possible cause of death was due to the cyanobacteria toxin, also known as blue-green algae toxins.

Blood samples from the dog came back negative for the toxin. However, the bacteria is difficult to detect, and it breaks down quickly if the sample hasn’t been stored properly, said Susan Wilde, associate professor in aquatic science at UGA.

“We immediately sent those results to the University of Georgia for analysis in which they did not find any harmful levels of toxin in that sample,” said Jason Ulseth, Chattahoochee Riverkeeper.

Wilde said she and her team at UGA found blue green algae, which can grow on the sediment in the river, the mud on the bottom of the river. She also concluded that the levels of the toxin found were not high enough to kill a dog, but she also acknowledged that the sampling happened after the incident.

“I can't say for sure that that was a cyanotoxin poisoning, but it certainly looks like it could have happened,” Wilde said. “We did find the cyanobacterial filaments that can produce anatoxin and we did find low levels of the toxin that they produce.”

The Chattahoochee Riverkeeper, UGA and the National Park Service performed additional testing in March in the area where Chewy swam and at two other locations. Those samples also did not register harmful levels of toxins, Ulseth said.

“So, we do not know what the cause of death was in Chewy, but out of an abundance of caution we are going to continue to do follow up sampling through the spring and summer just to make sure that we're not seeing anything that can be considered harmful or dangerous,” Ulseth said.

Regular testing is conducted of the river, in particular for E. coli, but the Chattahoochee Riverkeeper typically does not test for cyanobacteria “because it’s never really been identified as an issue on the Chattahoochee, Ulseth said.

Wilde said she hasn’t seen levels high enough that would warrant posting a warning, but there is sufficient cyanobacteria to cause a problem with the right environmental conditions, and it is worth investigating because of the dog’s death.

Wilde noted some areas of concern on the river, including along Gold Branch Trail, where Chewy went into the water.

The UGA team also tested samples from Morgan Falls Park. The results were fine off the boat dock, but cyanobacteria was found in a nearby cove, an area that would usually be flooded.

Wilde said she didn’t think there would be much contact with the sediment for most people recreating in the area when more water is on top of the mud. The concern comes during low water periods, when the sediment and mud is not submerged and when conditions are right for the blue green algae to reproduce in the mud.

Flood events can bring in a lot of nutrients, and when the water slows down, algae can begin to take advantage of those nutrients and reproduce, especially when the water level is low and things are concentrated, Wilde said.

“We have access to nutrients in this watershed and it comes in with some turbid, muddy inflows from some creeks that still need to have probably more nutrient management and we need to have better water processing systems,” Wilde said.

Wilde also said that Fulton County has experienced a number of sewage spills. In 2019, Fulton County’s sewage system was overwhelmed by heavy rains and more than 40 million gallons of untreated sewage spilled into waterways from Camp Creek to the Chattahoochee River, according to a report in the Atlanta Journal-Constitution.

A spill was reported on Jan. 26, at a manhole on Concord Street in Alpharetta, which was around the time Chewy swam in the river. A small waterway is within the vicinity of the spill location and it was about nine miles from the Chattahoochee River, said Regina Waller, public information manager for Fulton County.

The impact of the spill on the river is unknown though it was expected to be minimal, Waller said.

Fulton County is not required to test for blue green algae as part of its Environmental Protection Division permit requirements, Waller said.

“The size of the spill is considered minor by the Georgia Environmental Protection Division,” Waller added. “Therefore, no testing is required by EPD of the waterway.”

Wilde said that the spill wouldn’t have had a direct impact on the incident, but it is an indication of a larger problem.

“If we're getting that kind of contaminated water into our systems on a consistent basis, not every time but with more frequent heavy rainfalls, more frequently it's happening,” Wilde said.

She said there is a prevalence of spills in the region, and they happen too often.

Wilde said she doesn't want to inflame panic, but she thinks it’s a real enough concern, and she is glad the situation is being investigated.