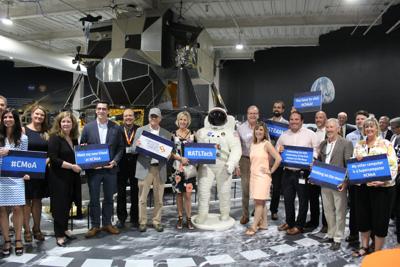 The museum, located at the Roswell Town Center on the corner of Holcomb Bridge Road and Alpharetta Street, houses one of the largest collections of computers and artifacts from the digital revolution. It includes prototypes, one-of-a-kind developments and original technologies preserved in Smithsonian-level quality, said founder Lonnie Mimms.

“This is filling a vacuum, not only in Roswell, but for the whole Atlanta Region,” Lonnie said. “And this is only Phase I.”

Modeled after the likes of Fernbank Museum of Natural History, the Computer Museum of America is a gathering and learning space to inspire people of all ages. Currently, it’s exhibits include the moon landing, a timeline of modern computing, IBM and Apple technology, early video game technology, a Byte magazine archive and Cray supercomputers.

“The items here were chosen for a reason,” Vice President Karin Mimms said. “They are significant or had an impact on society or the technological timeline… Our goal is to make this museum relevant to everyone’s lives.

“All of the stories aren’t told yet, as Lonnie says. Without the stories, all of these items are boat anchors — who cares? But when you tell the stories — how it impacts all of our lives, how it make a difference — then you care, and it matters.”

The museum’s goal, to preserve the past and inspire the next generation, is encapsulated in its tag line: “Innovation past forward.”

The museum centerpiece is a temporary exhibit that tells the story of the moon landings, complete with several equipment models and an immersive moon landing scene including an Apollo Lunar Module model. The museum plans to keep the exhibit up for a few years, but NASA representatives are talking to museum staff about keeping it up longer, Lonnie said.

One of the crown jewels of the museum is its Cray supercomputer collection, named after the father of supercomputers Seymour Cray. It is one of the largest collection of these supercomputers, which have been used in military defense, animation and weather forecasting.

The highlight of the exhibit is one of the first Cray products, which was made in 1979.

“This is the iconic supercomputer,” Lonnie said. “This is the one that everyone would look up to. It held the title of ‘fastest computer in the world’ for longer than any computer will ever hold it again.”

Many of the exhibits are expected to rotate about every 18 months. As the museum expands, it will fill the second floor of the building and will include more theme-based exhibits, such as the hospital of the future or music, Lonnie said.

The museum is poised to become a huge draw for local and national crowds and revitalize Roswell Town Center, according to Roswell Inc Executive Director Steve Stroud.

“This is monumental for so many reasons,” Stroud said. “It’s important for business. It’s important for the investment the Mimms family has put in this corner of Roswell… But more importantly, what we have here is a product that Visit Roswell can sell and bring technology companies to Roswell.”

To learn more about the museum or get involved, visit computermuseumofamerica.org.