You are the owner of this article.
Edit Article Add New Article
You have permission to edit this article.
Edit
Local News
Regional News
Opinion
Best of North Atlanta
Best of Perimeter
Podcasts
Calendar
Obituaries
Submit
Sponsored
Classifieds
Circulation
Legal Notices
About
1 of 2 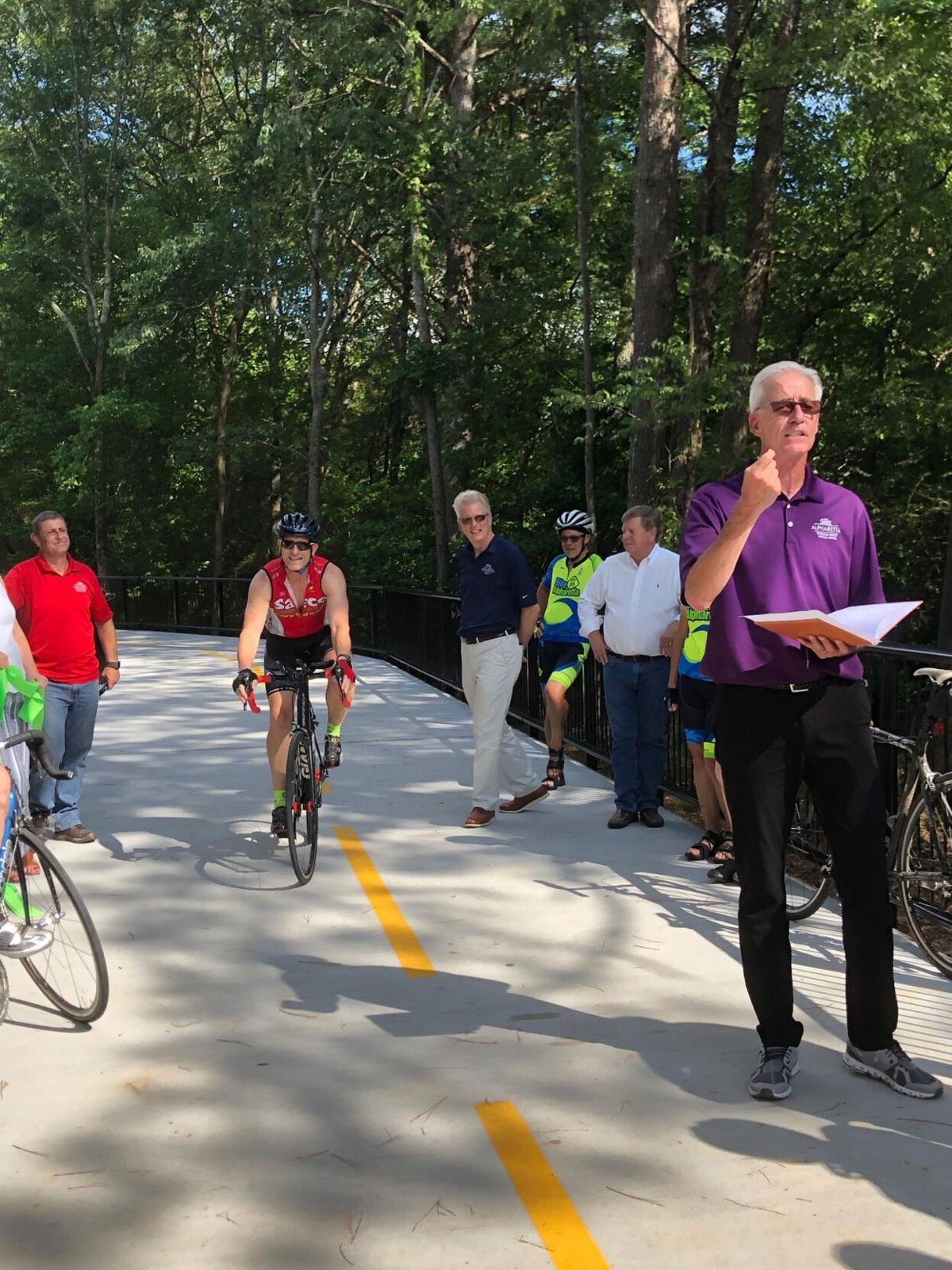 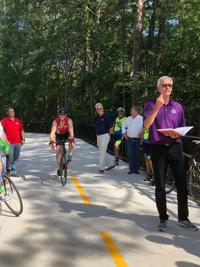 A cyclist navigates through a group gathered to celebrate the official opening of the last leg of the Big Creek Greenway in Alpharetta’s Union Hill Park June 29. Alpharetta Parks and Recreation Director Morgan Rodgers, right, called completion of the Fulton County leg of the Greenway a milestone. 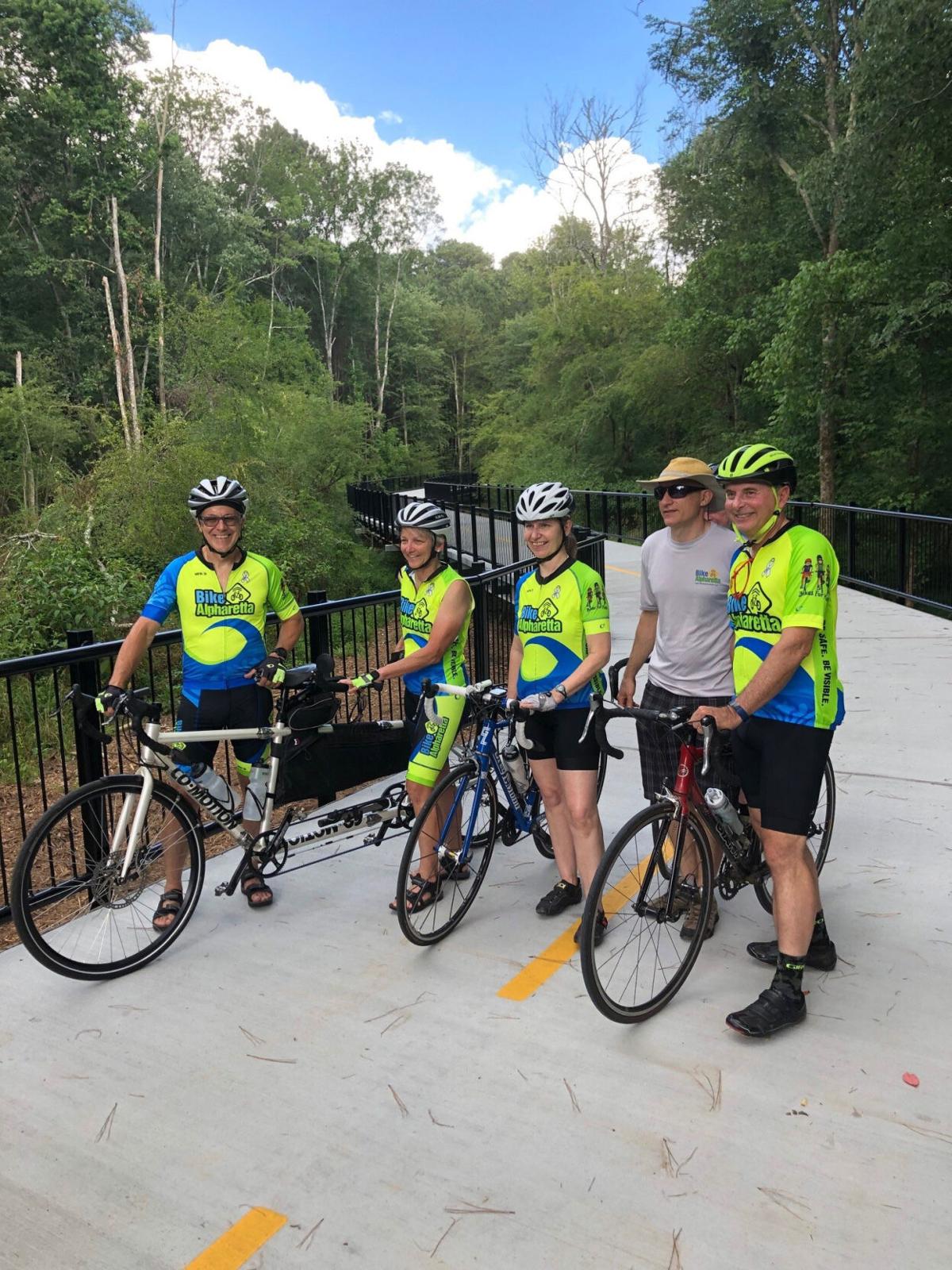 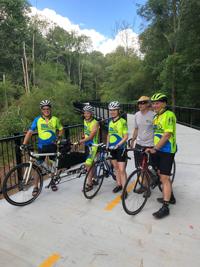 Members of Bike Alpharetta align at the new Greenway trailhead at Union Hill Park during its official opening June 29.

NORTH FULTON COUNTY, Ga. — It was one giant leap for Alpharetta June 29 when officials opened the city’s last leg of the Big Creek Greenway.

The last part, the 2.8 miles from Marconi Drive north, was the biggest challenge, pitting the city in countless negotiations for strips of parkland to bypass the Golf Club of Georgia, tunnel under Windward Parkway and angle north to Union Hill Park. It wasn’t cheap, about $10.9 million, but parks officials say the Greenway consistently ranks as the most popular amenity in Alpharetta.

Speaking to a group of about two dozen people at the opening, Alpharetta Parks and Recreation Director Morgan Rodgers said he recalled thinking about this day more than 25 years ago while he was with the Roswell Parks Department.

“I was in meetings where they talked about connectivity, and I remember the thought of how in the world are we ever going to connect with Forsyth County?” he said. “Here we are in 2021, and we’re living the dream.”

Alpharetta Mayor Jim Gilvin said the idea to complete the city’s portion of the trail was only an idea in 2015. Strong support from city staff, the City Council and outside groups like Bike Alpharetta helped push through a parks bond that contributed $7 million to the project.

“They got it done on time, under budget, and now we can celebrate,” Gilvin said.

Dennis Carman, president of Bike Alpharetta, said the Greenway offers more than a recreational resource to visitors. With ideal conditions for cyclists, he said, the trail serves as an auxiliary corridor for those who wish to commute on two wheels.

“It’s a multi-purpose pathway, not only [for] exercise and recreation, it can serve as a commuter connector route as well,” Carman said.

The torch now passes to Forsyth County, where plans to extend the Greenway from its current terminus at Halcyon south to Alpharetta awaits construction to widen McGinnis Ferry Road, which separates the two jurisdictions.

“It’s our most popular facility in Forsyth County,” he said. “People love it.”

Right now, the county’s hands are tied just about a mile shy of the goal line.

“For a long time, we’ve been wanting to connect the Greenway, and it’s been a lot of work, a lot of partnership,” Pryor said. “When McGinnis Ferry Road gets widened, we intend to do that.”

Pryor said issues have developed over the years with the boardwalk portions of the trail, and the county is replacing a lot of the wooden sections that have rotted.

But standing among the celebrants at Union Hill Park, Pryor had his eyes on the immediate north, the strip that will connect Forsyth County with Alpharetta.

“They’ve done their part of the bargain, and when the work gets done [at McGinnis Ferry Road], we’ll have our side,” he said.

Concert on the Green raises $80,000 for first responders