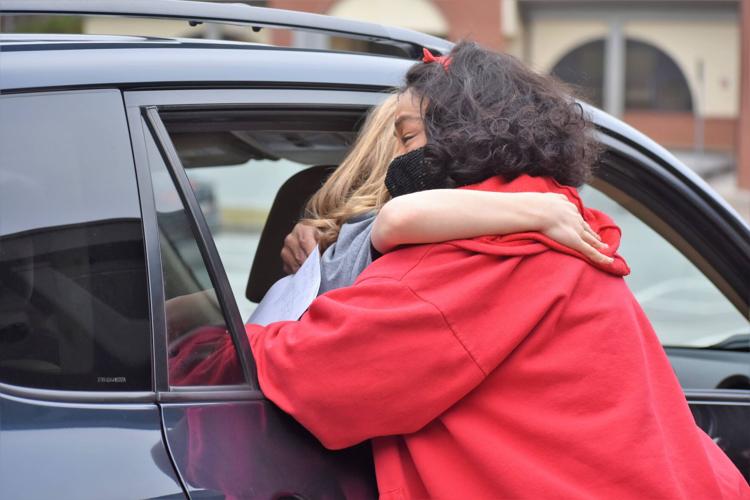 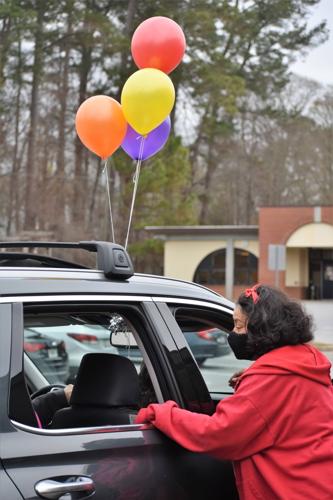 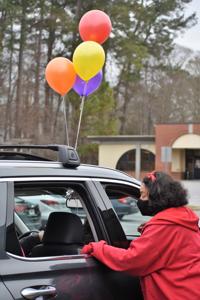 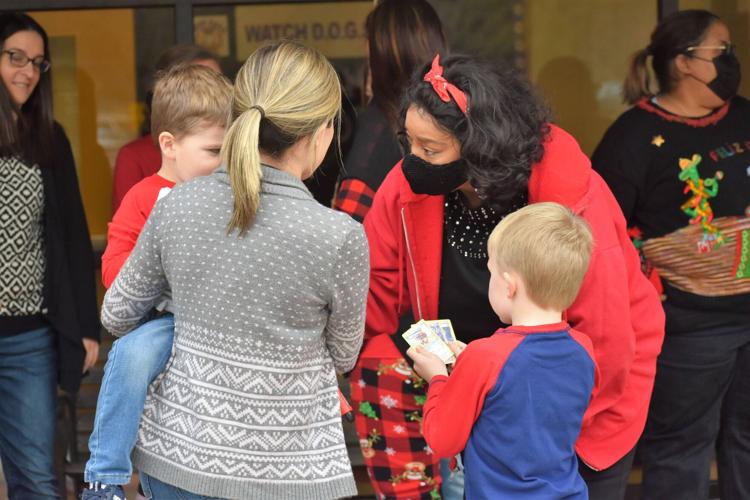 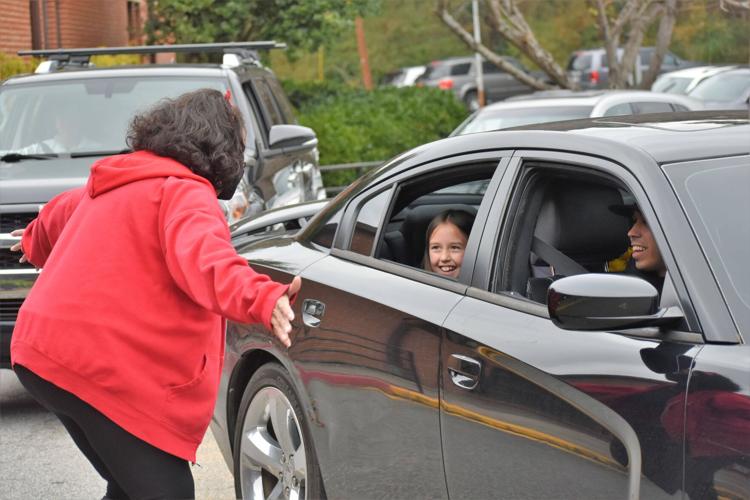 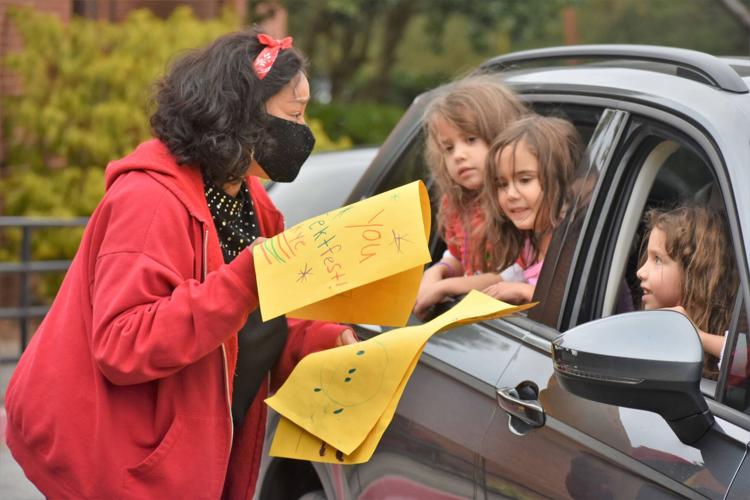 Alpharetta Elementary School Cafeteria Manager Vickye Monger takes a series of posters from her students expressing their appreciation for her. Monger is retiring after 30 years with the school. 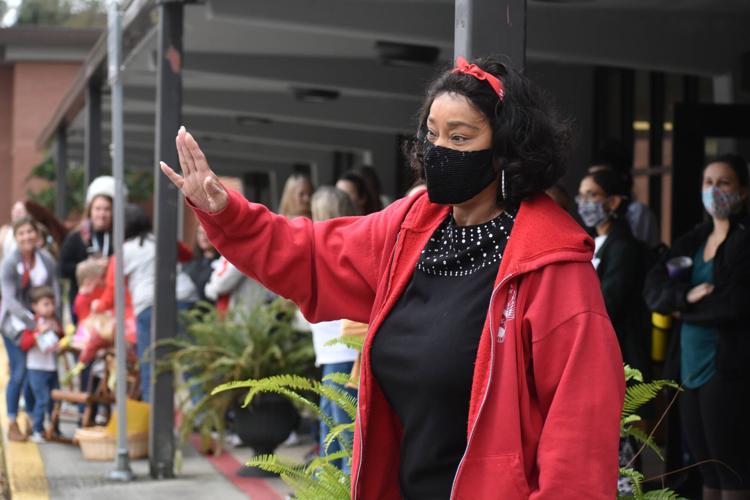 Alpharetta Elementary School Cafeteria Manager Vickye Monger waves as her students and their parents drive by Dec. 15 to wish her well on her retirement. 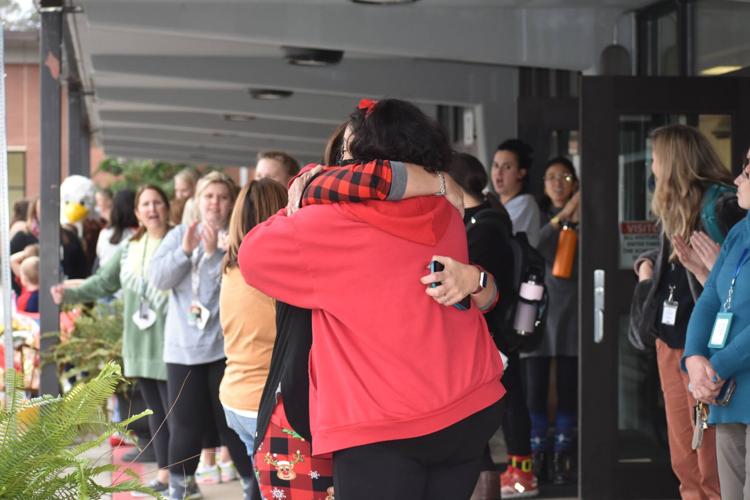 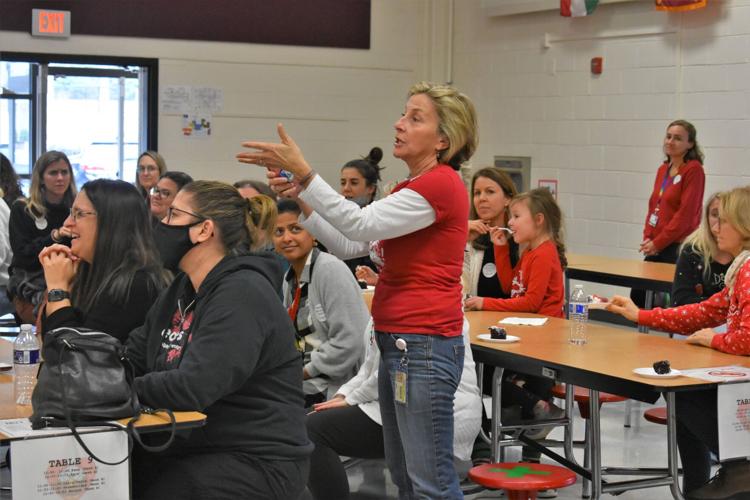 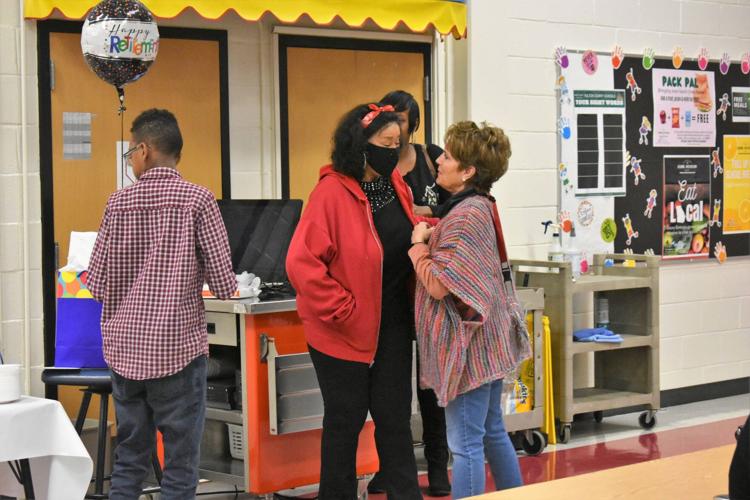 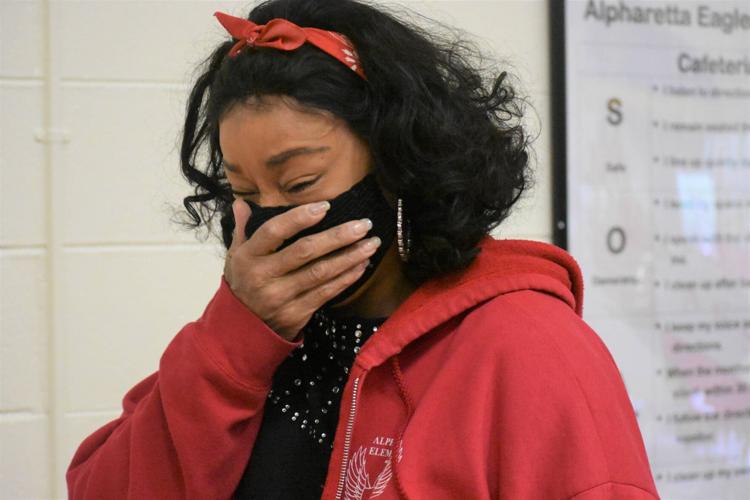 Alpharetta Elementary School Cafeteria Manager Vickye Monger takes a series of posters from her students expressing their appreciation for her. Monger is retiring after 30 years with the school.

Alpharetta Elementary School Cafeteria Manager Vickye Monger waves as her students and their parents drive by Dec. 15 to wish her well on her retirement.

ALPHARETTA, Ga. — Much has changed in the 30 years since Vickye Monger was hired to run the kitchen at Alpharetta Elementary School.

Thousands of kids have gone through her lunch line, including the children and grandchildren of her former students, but her love for interacting with them remained throughout her career, which ended Friday, Dec. 17, when she left the kitchen for the last time.

“It’s been a blessing,” Monger said. “... [The students] always made me feel like I was a part of their family. That was the best feeling. … When I don’t come back Jan. 3, I’m really going to miss the kids. They made the job worthwhile.”

Alpharetta Elementary celebrated her retirement Dec. 15 by naming it Miss Vickye Day. During lunchtime, the students showered her with handmade letters thanking her for her friendship, and at the end of the day, Principal Cathy Crawford surprised her with a drive-by event.

“You will always have a home here,” Crawford said. “We love you so much.”

Teachers, staff, parents, and current and former students dropped by to bid her farewell. Others, shared messages of how she impacted them, saying that when former students reminisce about their time at Alpharetta Elementary, her name always comes up.

“I’m always going to remember this,” Monger said. “Dec. 15, that is the day that I had here in Alpharetta. … It does not seem like time flew by that fast. It’s just amazing, and I’m so appreciative of everything because I’m just me. I just worked in the cafeteria. You never think that you make an impression on the kids, but I guess in some kind of way we formed a bond.”

For nearly three decades, Monger, 63, has served as the school’s cafeteria manager. She was responsible for everything from maintaining milk temperatures to managing the staff’s timesheets. In the past 20 years, she said proudly, her kitchen also earned perfect scores during the health inspections twice a year.

She is both excited and sad about retiring. The funny thing, she said, is she never set out to work in a school. When she moved to Alpharetta from Memphis, Tennessee, 32 years ago, she simply decided she wanted to do something in addition to being a mom to her two children, who are now 41 and 37.

Her mom suggested she apply as a cashier at a local school. From there, Monger worked at several schools in the area before settling on Alpharetta Elementary, and the more she worked in the kitchen, the more she wanted to do it. She said the kids kept the job exciting.

“I remember the day I came in,” Monger said. “I was scared. I was like oh my gosh, now I have to do this, but I did it and then I implemented different things like having an annual cookout, which we have not been able to do for the past two years due to the COVID-19 pandemic.”

Monger said the cookout was a fun way to get the school together. But, perhaps what she is most well-known for, are the famous cinnamon rolls she used to make from scratch. Although it was a standardized school recipe, everyone seemed to love them, especially their size.

Due to revised nutritional guidelines, the school had to stop making them, and Monger said she doesn’t remember the recipe, but those who were lucky enough to taste them continue to ask her to bake them at least one more time.

Monger said she is retiring because her lupus symptoms have gotten more intense over time, and she can no longer keep up with the demands of the job. Lupus is a long-term autoimmune disease that can cause inflammation and pain in any part of the body. Monger never let it affect her job, except that now she said she would like some time to herself.

Her strong work ethic, she said, comes from her mom and being family-oriented, which she passed on to her own kids. Growing up, she said she told them that if they took a job, they had to make sure they did it the best they could. Monger said she never missed a day from work, despite her days often lasting from around 4:30 a.m. to 5 p.m.

Monger said the piece of advice she would share with her students as they went through the lunch line was to “always go forward, reach your goals and never stop.”

Upon retiring, she said plans to sleep in for the first couple of weeks. Then, she is looking forward to enjoying her five grandkids who range in age from 5 to 18 years old.

Monger said she hopes she is remembered for always caring about her students and for being a fun-loving person who was just trying to improve some part of their day.

“That’s it,” Monger said. “And just being Miss Vickye.”