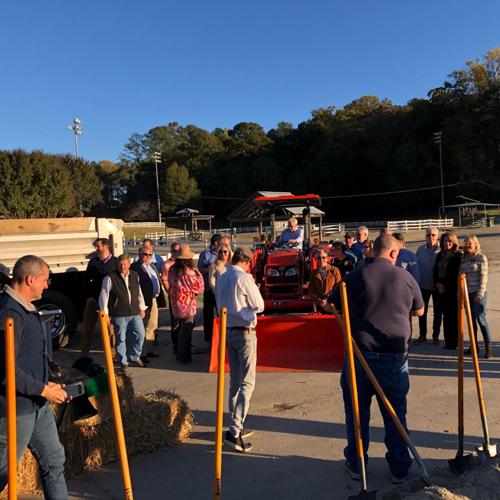 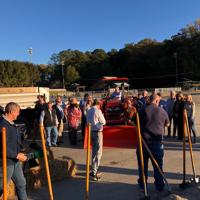 Alpharetta Parks, Recreation and Cultural Affairs Director Morgan Rodgers takes the helm of a front loader at groundbreaking ceremonies for improvements to the Equestrian Center at Wills Park Nov. 8. 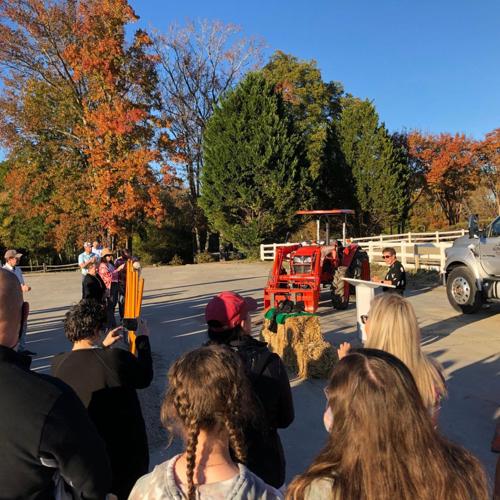 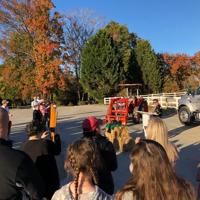 Wills Park Equestrian Foundation President Cheryl Sims addresses a crowd of about two dozen people Nov. 8 marking the start of improvements to the popular horse park. The non-profit foundation is matching the city’s commitment with $5 million of its own money.

Alpharetta Parks, Recreation and Cultural Affairs Director Morgan Rodgers takes the helm of a front loader at groundbreaking ceremonies for improvements to the Equestrian Center at Wills Park Nov. 8.

Wills Park Equestrian Foundation President Cheryl Sims addresses a crowd of about two dozen people Nov. 8 marking the start of improvements to the popular horse park. The non-profit foundation is matching the city’s commitment with $5 million of its own money.

ALPHARETTA, Ga. — Less than a week after voters passed a multi-million-dollar parks bond, about two dozen people gathered at Alpharetta’s Wills Park to mark the launch of major upgrades to the Equestrian Center.

It was the start of some $11 million in improvements planned for Alpharetta’s centerpiece park, a 120-acre natural oasis in one of North Fulton County’s busiest cities.

The horse park, itself, is scheduled to receive $5 million of bond money for upgrades that include a new competition ring, drainage and footing in all competition rings and the covered arena, new barns, shaded spectator seating and an office/spectator building. The non-profit Wills Park Equestrian Foundation has committed $5 million of its own money to match the city’s commitment to the upgrades.

“This is a 50-year-old park, we have a lot of revitalizing to do,” said Foundation President Cheryl Sims. “It has launched many national champions, and it has been the cornerstone of many, many young riders, some of which you’ve seen here today.”

Sims said work on the arena will begin in January, and the project is set for completion the first of March.

With the overwhelming passage of the parks bond, Wills Park and the Equestrian Center will become the major focus of revitalization that will include construction of Wacky World Playground, additional parking, improvements to the disc golf course, a complete rebuild of Waggy World Dog Park and construction of a family gathering spot near the pool facility.

Three members of the City Council, including Mayor Jim Gilvin, voted against placing the bond on the November ballot, arguing that it would commit the city to spending money it may need for road improvements if the countywide transportation sales tax, also on the Nov. 2 ballot, failed at the polls. But that fear faded on election night when the sales tax passed by a 3-1 margin. The tax is expected to generate some $60 million in added revenue for transportation projects in the city.

Gilvin said he was reassured by the sentiments of a local community that proved its commitment to bettering its quality of life.

“It’s really special when a community can pull together and work with the local government,” he said at the groundbreaking. “We had a partner in the Equestrian Foundation, Cheryl and all the donors who made this day possible.”

The fight to get the parks bond on the November ballot – it passed the City Council on a narrow 4-3 vote – has not left elected leaders unscarred, however.

Council members who led the campaign to get the referendum on the fall ballot said they were proud to be part of a group that recognizes the will of Alpharetta residents and acts on it.

“Voting in favor of projects and funding projects are not mutually exclusive,” Burnett said. “Anybody can show up for a ribbon cutting, but it actually takes people to back-bench the work to get to days like today.”

Binder: Alpharetta must continue its drive for enhanced parks