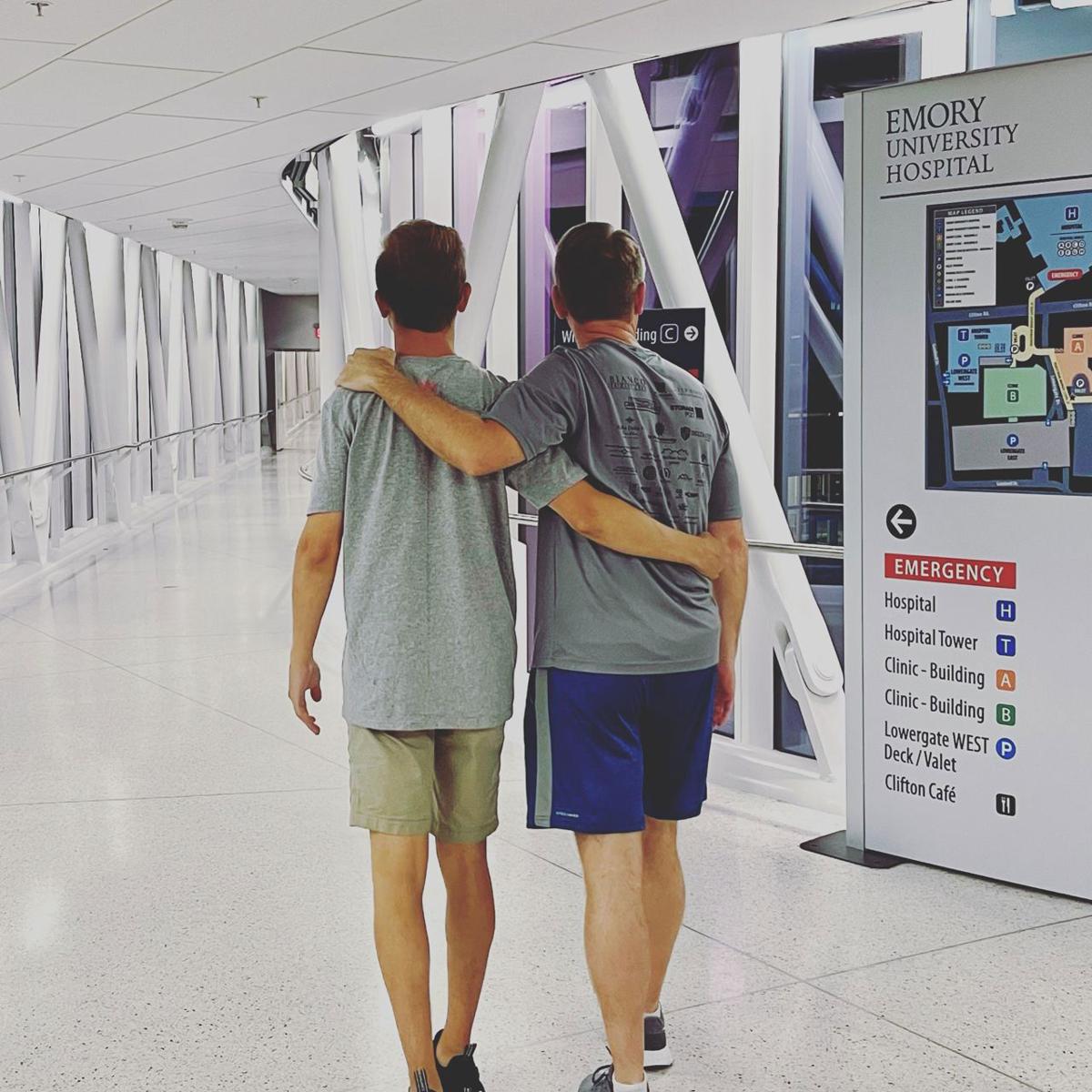 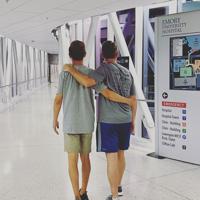 From left, Will Albers walks through Emory University Hospital beside his dad, Sen. John Albers, after receiving one of his kidneys. In 2020, Will Albers went to the hospital, where he was told he was in full renal failure. 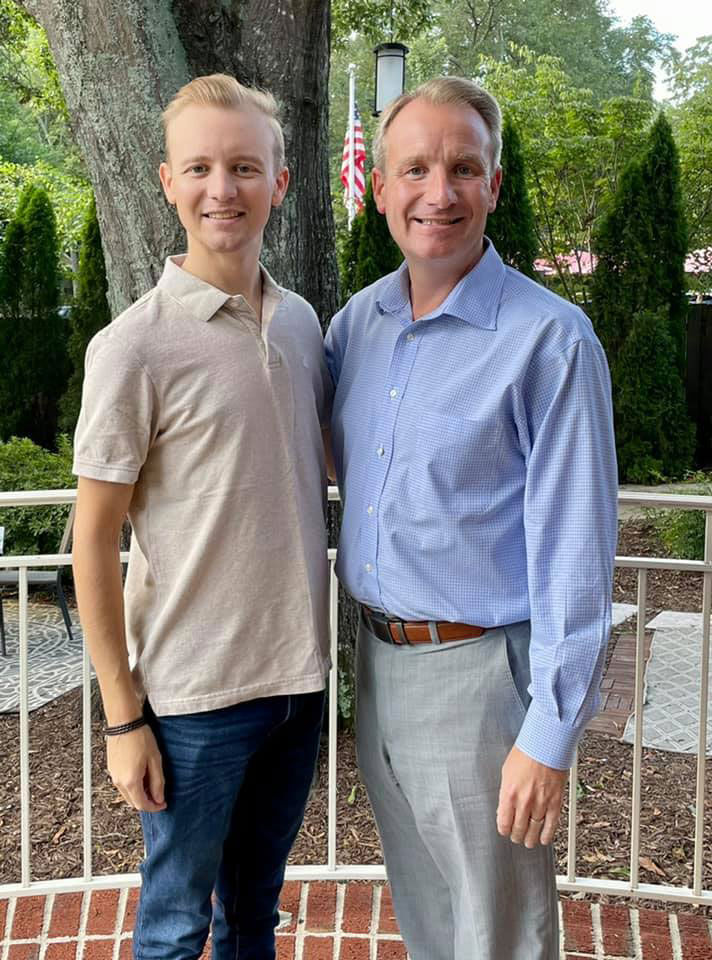 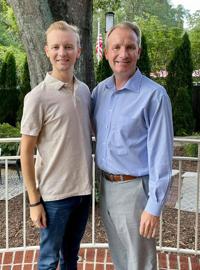 Will Albers, left, says he is back to feeling like normal, napping less and living his life again following his kidney transplant. His dad, Sen. John Albers, is working on legislation called the Giving the Gift of Life Act to expand the benefits for those who want to be organ donors.

His dad, State Sen. John Albers (R-Roswell), said his son had lost a lot of weight and had cramps and pains and could not keep food down. His feet also hurt, but a podiatrist told him he had probably just “tied his shoes too tight.”

Then, one night, Will drove a short distance to his parent’s house, where his mom, Kari Albers, insisted that he go to the emergency room after noticing that he had started vomiting blood. Will was admitted to the intensive care unit.

He recalls waking up very cold in the Northside Hospital Cherokee waiting area. However, he had passed out earlier that night at the many attempts made to draw blood and get an IV going. Will was also alone, as COVID-19 policies did not allow for his parents to be at his side. He was scared and tired.

“It was a very traumatic and very scary time to say the least,” John said. “Thank God, he lived through the night. The doctors didn’t know if he’d do that, but they found out in the morning he was in full renal failure. Both his kidneys were completely gone. And they told us at the time that he had to go in dialysis.”

John said they started the process of getting Will on the national organ transplant list at the start of this year, and both parents underwent testing to see if they were a match to donate a kidney. John knew there was a possibility that they would be because he and Will are of the same blood type.

Leukemia patient credits Dunwoody neighbors for pulling her through recovery

If not, they would try a paired kidney exchange, where Kari could give a kidney to somebody and somebody would donate their kidney to Will. But on July 1, John said he got “one of the greatest phone calls in the absolute world,” informing him that he was an exact match.

Will and his dad underwent surgery at Emory University three weeks later. About a week after the procedure, the two men were back home, and although he felt a little sore, John was able to return to work. He said he doesn’t do anything differently now than he did before.

“Most people probably don’t go back to work that early, but I was anxious for a little normalcy, so I went down to my business office and worked about a half-day,” John said. “I was amazed because part of the surgery was laparoscopic, and then they make an incision in the belly button where they actually take the kidney out. They have come so far with medical science now it’s just amazing, and I can’t thank the doctors and nurses and medical staff at Emory Hospital more. They’re miracle workers.”

Will is also back to feeling like normal, napping less and living his life again. He takes anti-rejection medicine every day, but that’s it.

John said they will probably never know for certain why this happened to Will, but it may be connected to his family’s medical history. As a boy, Will also had a slightly high creatinine level, which is what is used to measure kidney function. John said it was never anything of major concern. Doctors just gave him a pill when he was a teenager to flush his kidneys. It wasn’t until later that they found out several family members had also experienced kidney failure.

Despite being well-educated and well-connected, John said the process of getting on the organ transplant list was difficult. Now, they want to help others in similar situations. John is currently working on legislation called the Giving the Gift of Life Act to expand the benefits to those who want to be organ donors to help them and the recipient.

• Prevent life insurance companies from canceling coverage or denying coverage when someone donates a kidney or part of their liver;

• And give a tax credit to businesses which allow a donor and recipient to take up to six weeks off from work without having to go on leave or use saved up vacation or sick time.

John said the bill has been drafted. In the meantime, he is meeting with lawmakers ahead of the 2022 legislative session to garner their support.

“I feel confident people will see the great benefit in this,” John said. “More than anything, we’re saving people’s lives, but secondarily, it’s the greatest return on investment because, for someone who is in full renal failure, who’s doing dialysis and likely going to be spending a lot of time in the hospital and doctor’s office, it costs upward of $250,000 a year, where once this procedure is done, they can just go back to living their life normally.”

In October, the Albers shared their story at the 11th annual Angels of Life event at the Cobb Galleria, a benefit for the Georgia Transplant Foundation. The foundation offers resources for donors and donees ranging from mentorship to helping people find jobs after they’ve had an organ transplant. It also offers financial help with house payments, utility bills, car payments and more.

Georgia Transplant Foundation Board Member Lester E. Crowell Jr. started Angels of Life shortly after receiving his second heart transplant in 2010. He said he doesn’t believe people should have to choose between going to work or waiting with someone at the hospital while they undergo a transplant.

“I had a heart condition since I was 13,” Crowell said. “They took me out of physical education since I was in high school. I couldn’t do physical things all my life until I got my heart transplant when I was 43 and started working out for the first time. Sometimes you don’t know what it’s going to be like after the fact until you have someone to talk to who has been through it.”

John said he hopes others will learn from Will’s story and see a doctor as soon as possible if they are experiencing symptoms of kidney failure, that they will learn about their family’s medical history and find out if they can be an organ donor for someone in need.

“My son and I have always been very close, and I joke now – he has my left kidney – so I ask him how ‘lefty’ is doing, but obviously, a circumstance like that took a very strong bond and made it even stronger,” John said.

For more information on being an organ donor, visit the Georgia Transplant Foundation at gatransplant.org or the American Kidney Foundation in Roswell at kidneyfund.org.